ASTON, PA -- Nick Daluisio, a defenseman for the Philadelphia Little Flyers, has committed to UMass Boston for the fall of 2019.

The '98 native of Pennsylvania is in his second season with the Little Flyers, and to date, he's tallied 77 points in 94 career games in the Eastern Hockey League (EHL).

"Nick's confidence in his game this year has been big for him and us," said Little Flyers head coach and general manager Mark Catron. "Last year he played some big minutes down the stretch, and had to step up in pressure situations and performed well. This year he has been confident from the opening puck drop of game one, that led him to being named an EHL All-Star. His performance during All-Star Weekend was an eye-opener to a lot of people, including myself to be honest, against two really good college programs. One of those games being at UMass Boston gave Coach Belisle and his staff a chance to see Nick for an entire contest up close, which really helped him commit to the school he wanted to go to. As a leader this year, Nick has been great on and off the ice, as him and Ziki [Mroz] have done a good job keeping our guys focused. Mike [Narrigan] and I are proud of Nick and know he is going to do good things once he gets to UMass Boston."

As Catron mentioned, Daluisio was member of this year's EHL All-Star Team, and it was over that weekend when he grabbed the attention of the Beacons coaching staff. UMass Boston is bringing in Daluisio and fellow EHL All-Star Jake Adkins (New Hampshire Avalanche) as the 12th and 13th EHL players respectively to commit to the program since the league was formed back in 2013. In back-to-back years facing UMass Boston, the EHL has now sent a pair of players each season to one of the top college hockey programs at the Division III level. Daluisio is looking forward to the future and took some time to show his appreciation to everyone that helped him along the way.

"I am proud to announce my commitment to the University of Massachusetts-Boston for the fall of 2019," said Daluisio. "I first would like to thank my family, as without their endless support and constant perseverance through hardships, I would not be the person I am today. Also, I would like thank Coach Catron, Coach Narrigan, the whole Little Flyers organization, and the Giacobbo family for making my junior hockey career successful and getting me prepared for college. Next, I’d like to thank Coach Russo and Coach Lewis for their pivotal part in this process as well. Finally, I’d like to thank Coach Belisle and Coach Schneider for the opportunity to join a high class university and program like theirs."

With this weight now lifted, Daluisio will turn his focus towards the upcoming EHL playoffs, where he hopes to lead his team back to Providence for the second straight season. If Philadelphia advances to the Frozen Finals, they will seek to become the first team in #Eshow History to win both the regular season and playoff titles in the same year. 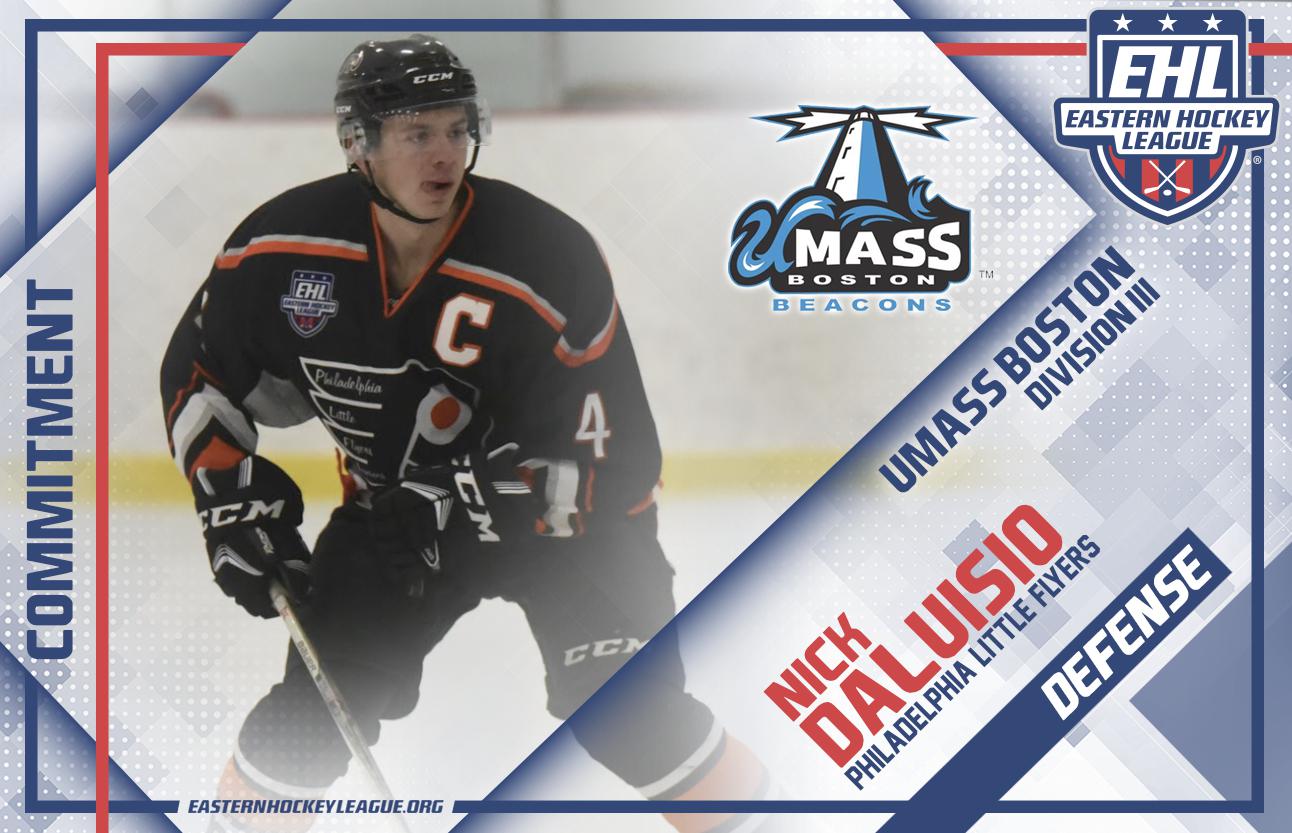