Frozen Finals week began with the 1st Annual EHL Banquet of Champions and Awards Show. The event was held on Wednesday, March 20th at the Crowne Plaza in Warwick, RI. All four teams were in attendance, along with representatives from other organizations across the EHL, and the Eastern Hockey League Premier (EHLP).

The night featured a delicious meal for everyone in attendance, along with the announcement of all of this year's award winners in both the EHL and the EHLP.

Capping things off at the end of the night was Paul Stewart, who shared his story that included many challenging steps along the way to the USA Hockey Hall of Fame. 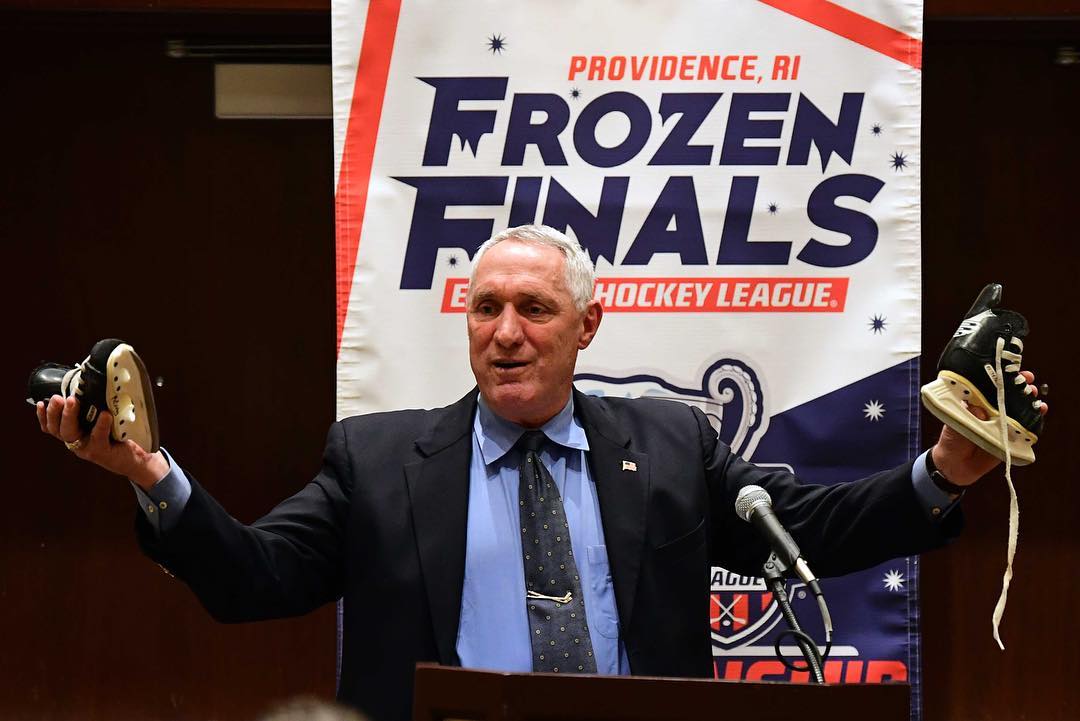 When the four teams arrived at Schneider Arena, they all did so with high hopes set on leaving Providence as EHL Champions. The field was very even, as it featured three regular season division champions, and a 4th team that could wear the label as the 'hottest' club in the EHL. Each organization owned a great deal of confidence going into their first respective game, and the matchups didn't disappoint.

As for the Wizards, they also entered fresh off their best regular season in franchise history (29-12-3), and they had just knocked off the Vermont Lumberjacks in the Second Round.

After the Wizards came back to tie the score up at one apiece early in the hockey game, the Little Flyers stretched out their lead to 4-1. Another comeback effort was made, but ultimately, the Little Flyers held on for a 4-3 victory. Austin Master's pair of goals proved to be the key to victory for Philadelphia.

Moving along to the night-cap on day #1, and the Avalanche were ready to continue with their defense of the 2018 EHL Championship. After claiming another division title, the Avalanche entered the playoffs as the top-seed in their conference yet again, and took care of business in the Second Round against the Boston Jr. Rangers.

On the flip side, the Wilkes-Barre/Scranton Knights were the only team in Providence that had to play in the First Round, but weren't taken lightly upon arrival. The Knights had recently worked their way through a pair of division rivals in the New York Applecore and the New Jersey 87s, just to earn their spot at the Frozen Finals

As for Thursday night's matchup, the Avalanche peppered Thomas Walker through the contest, and Jake Adkins' three points were enough to lead New Hampshire to victory. The 4-0 shutout was the 2nd of the playoffs for Nathan Pickett.

At the end of the first day, the Avalanche and Little Flyers were tied at the top of Round Robin standings, each having earned three total points.

Moving along to day #2 and we kicked things off with the two teams tied at the top of the Round Robin standings. Dating back to their first-ever matchup this past season, the rivals had played a number of very tight contests. Combined between the regular season and postseason meetings, the Little Flyers held a slight head-to-head edge over the Avalanche, as they owned a record of 3-1-1 in their five previous matchups. Also included in that mark, was a win over the Avalanche during the Round Robin last March.

New Hampshire turned the tables this time around.

After a scoreless 1st period, each team scored just 46 seconds apart from each other, early on in the 2nd period. However, New Hampshire grabbed the lead, with a goal from Cameron Weitzman with just 13 seconds left in the frame.

Moving along to the final period, and after Rece Bergeman tied up the score, the game seemed destined for overtime. That was until Wiggle Kerbrat tipped home a great shot from Niks Krollis, with just 3:22 remaining in the 3rd period. Kerbrat's tip-in was huge in a big victory for New Hampshire.

In Friday's night-cap, the Wizards and Knights knew that whoever came away victorious, would keep their hopes alive in the tournament. While on the flip side, the team that lost would almost be mathematically eliminated from advancing.

After Liam Oatman and Denys Arkhypenko put the Knights up 2-1 after 20 minutes, the game completely flipped, as the Wizards scored six unanswered goals over the next two frames.

Luke Pepin set the pace to victory, as he scored two beautiful goals in the contest, and added an assist as well. Despite the loss, Walker dazzled again between the pipes. After making 56 saves against the Avalanche, the '98 followed things up with 42 more saves against the Wizards.

At the end of day #2, the Avalanche sat at the top of the standings with six total points, while the Little Flyers and Wizards were tied for 2nd with three points apiece.

The final day of the round robin brought a chance for every team to try and punch their ticket to Championship Sunday. All four teams were in contention, including the Knights, despite beginning the day with a record of 0-2-0 in the Round Robin.

For a third consecutive day, Walker gave his team a chance to win, with another stellar performance between the pipes. Wilkes-Barre/Scranton managed to hold the Little Flyers to just a single goal in each of the first two periods, but the issue was Brendahn Brawley, who kept them in check on the other end of the ice.

With the start of the final frame, that's when Kyle Scott made his presence known, as he led the way with a pair of goals in the period. The Little Flyers provided themselves with plenty of insurance, and then sent the Knights home with a 6-1 defeat. Zach Ouladelhadjamed picked up the lone tally for the Knights.

With the Little Flyers result, that essentially turned the final game of the Round Robin, into a New England Conference Championship Game between the Avalanche and the Wizards. For New Hampshire the goal was simple, as with a win or overtime loss, they were heading to the title game. On the other end, the Wizards knew they had to win in regulation, and most likely, they had to do so by more than a goal. Early in the year, the Wizards had shutout the Avalanche by the score of 4-0, but Saturday's matchup played out more like the most recent regular season meeting, which was won by the Avalanche by the score of 4-2.

After a scoreless opening period, Andrew Harley snuck a tough-angled shot past Pickett, to give his team a 1-0 lead. Unfortunately for the Wizards, that was the only goal they would score, as the Avalanche would tally the next four goals in the contest. Tim Cronin tied up the hockey game for his team in the 2nd period, and the New Hampshire got goals from Weitzman, Nick Ritmo, and Krollis (EN) in the final frame to outlast the Wizards.

With the 4-1 final, the Championship matchup was set between the Little Flyers and the Avalanche, a rematch of their meeting on Friday.

"It's only fitting that the two best teams found a way to face-off for a second time in Providence," said Kyle Wallack, the head coach of Albertus Magnus College. Wallack was one of many college scouts in attendance over the four days at Schneider Arena.

All season long the feeling was that we were ultimately destined to get a Little Flyers-Avalanche matchup on Championship Sunday. Each team was met with challenges along the way, but they continued to persevere on the road to March 24th. The date had been circled on calendars for month, and the 60 minutes of hockey did not disappoint.

With every hockey game, the storyline unfolds a different way, as now two contests are completely identical. This was no different with the 2019 EHL title game, as each team traded a pair of goals in the opening period. Despite combining for only 14 shots and owning the top two goaltenders in the EHL, the score was locked at 2-2 after 20 minutes.

Moving forward to the 2nd period, and the Avalanche scored two more goals, all while holding their opponent off the board. It's important to note that while Weitzman scored a goal with 13 seconds left during the Round Robin matchup, Leo Avakovs followed suit with just 12 seconds remaining in the Championship Game.

The breakaway tally for the native of Latvia proved to be huge, as Mikey Giampapa got the Little Flyers back to within one in the final frame, and then the Avalanche held on for a 4-3 victory.

"Scoring goals in the final minute of a period is so crucial to the momentum of every hockey game," said Cerrella. "Fortunately for us, we accomplished the feat a couple of times in Providence, and the last one proved to be the difference. I am so proud of all the players that have worn our sweater over the past two seasons, as we've instantly formed a high-end culture up in New Hampshire. While we all plan to enjoy this victory and celebrate it for a little while, I am also looking forward to our upcoming tryouts, and getting the chance to bring in the next wave of talented players."

As Cerrella mentioned, he will make sure soak in this victory as much as he can. Working alongside Mario Martiniello (Assistant Coach/Owner), the Avalanche have high hopes again for the 2019-20 season, starting with their main camp, which is set for April 19th through 21st at the Ice Den Arena.

Nothing tops winning a championship and sending over 15 players on to college hockey. The challenges however, come back around right away, as Cerrella and Martiniello and now forced to fill the slots of many key players up and down the roster.

While Pickett backed New Hampshire to its Second Consecutive Championship, he also helped make the Avalanche the top team to beat in the EHL.

The Avs have set the bar, and the question now is, who will reach for it? 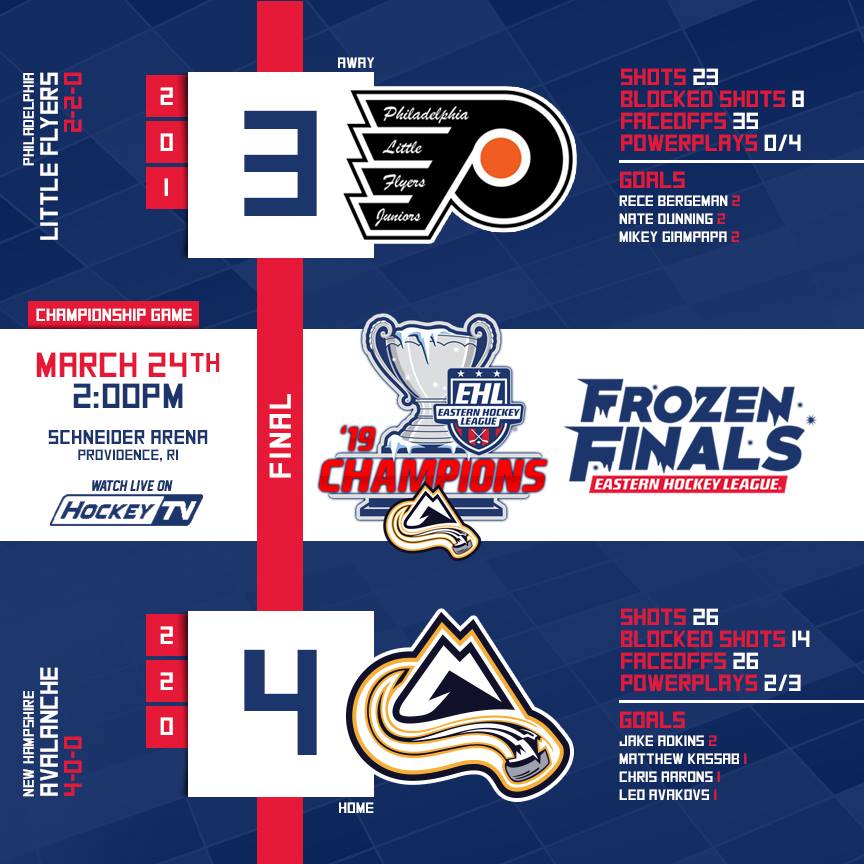 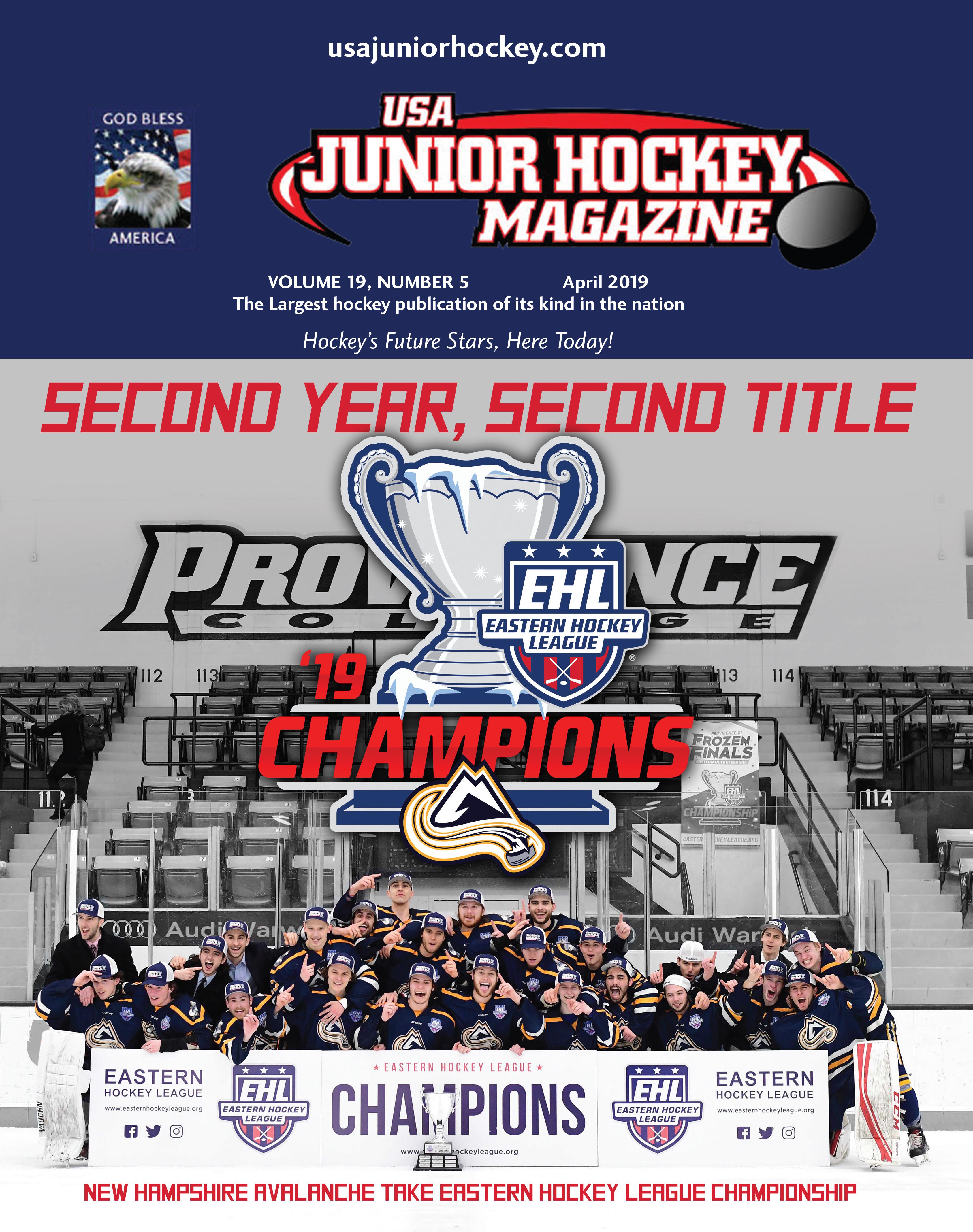