BOSTON, MA -- Over the past five seasons the Eastern Hockey League Premier (EHLP) has grown and developed into a solid stepping stone for players to move up to the Eastern Hockey League (EHL). From there, over 75 players have continued to climb up the ladder to NCAA hockey. While the majority of what you see is the player advancement, there have also been a number of coaches who have used the league to help them reach the next level. 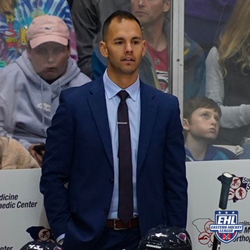 During his tenure with the Rangers, Blair's team reached the EHLP Finals in all three seasons, and earned championships in two of those three years. (Photo Credit -- SC Stingrays)

After spending three seasons with the Boston Jr. Rangers (2015-18), Ryan Blair went back to his alma mater a couple years ago (2018-19). Serving as the Director of Hockey Operations for UMass Lowell, Blair continued to develop as a coach, and quickly made his return to the bench.

This past year, the South Carolina Stingrays of the ECHL brought Blair on board as the team's new Assistant Coach and Manager of Hockey Operations. After just a single season, Blair is moving up again, but this time within his current organization. This past week, the Stingrays announced that Blair was being elevated up to the Head Coach role with the team. The new bench boss is excited for the challenge and is very grateful for the time he spent developing as a coach in the #Eshow.

"The EHL was a critical part of my development as a coach and as a person," said Blair. "The coaches and the league show great dedication to putting a top-notch product on the ice and I was proud to be a part of that. Rangers' owner Mike Sorabella and Head Coach/GM Rich DeCaprio were amazing to me throughout my three years with the program. The Rangers and the EHL provided me with a platform to discover my love and passion for coaching and teaching the game. I am very grateful to the Rangers and the EHL for the opportunity.”

During his tenure with the Rangers, Blair's team reached the EHLP Finals in all three seasons, and earned championships in two of those three years. Along with the Rangers, the EHL and EHLP would like congratulate Ryan and wish him the best of luck this upcoming season in South Carolina.