BOSTON, MA — For six years Mark Kumpel served in the role of Director of Hockey Operations, dating back to the inception of the Eastern Hockey League (EHL) in 2013. 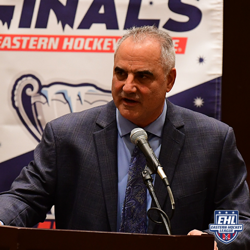 Kumpel speaks at the 1st Annual EHL Banquet of Champions and Awards Show, which was held this past March prior to the 2019 EHL Frozen Finals. (Photo Courtesy -- Dan Hickling)

Earlier this week the 1984 Olympian and seven-year veteran of the National Hockey League (NHL), announced his resignation from his position. Kumpel was presented with and accepted a coaching opportunity that will help advance his life-long hockey career.

“Mark has been the driving force behind the EHL from inception, and despite challenges, never wavered in his pursuit of excellence for the league, its members, and most of all, its players,” said Mike Santos, the Executive Director of the EHL.

During his time with the league, the EHL moved nearly 1000 players onto NCAA hockey programs at the Division I, II, and III levels. The EHL would like to congratulate Mark, and thank him for his selfless dedication to the league.

We wish him the best with his new endeavor in Beijing, China.