Warrior Hockey Stars of the Week #3

BOSTON, MA -- As the last week of September comes to a close, we have had yet another busy week in the Eastern Hockey League (EHL) with the first edition of the EHL Showcase Series taking place in Walpole, MA. With 18 games taking place at the event, there were numerous top performances delivered across the league. Below you'll find the 3rd set of Warrior Hockey Stars of the Week in the EHL and EHLP.

All 19 teams came together this past Sunday and Monday, for the first showcase of the season. Outside of the 18 games at Rodman Arena, there were 11 other contests that took place in the days leading up to the event. With many close games and great performances, there were plenty of worthy candidates to chose from for the weekly honors.

The EHL is pleased to announce that Justin Sullivan (Valley Jr. Warriors), Jake Mendeszoon (New Hampshire Avalanche) and Tanner Beals (New Jersey 87s) have been named the Warrior Hockey Stars of the Week.

Sullivan and the Warriors hosted the East Coast Wizards on Wednesday, before heading to Walpole to take on the Philadelphia Little Flyers and New York Apple Core during the Showcase.

Winning all three contests, the Warriors were able to earn all six possible points, putting them in 2nd place in the New England Conference.

Sullivan began his week tallying two points, scoring one goal and dishing out an assist, during a 6-3 win over the Wizards. The '00 forward continued his point streak with an identical showing during the Warriors 3-2 victory over the Little Flyers, scoring the game-winning goal, before finding the back of the net one more time during his team's 5-0 shutout over the Applecore.

Mendeszoon and the Avalanche ended their week winning two of their three contests. The week started with a 5-3 victory over the Seahawks Hockey Club on Thursday, where Mendeszoon was able to assist three of the five Avalanche goals. The 6’4” defenseman continued his point streak tallying an assist in the loss to the 87s Sunday, and finally wrapped things up with the game-winning goal over the Connecticut RoughRiders on Sunday.

Mendeszoon hopes to keep his five-game point streak alive as the Avalanche head to Worcester on Thursday to take on the Railers Jr Hockey Club, before returning home to host the Vermont Lumberjacks for a pair of games this weekend.

Beals and the 87s were able to capture two out of three wins this past week, as they faced-off against the RoughRiders, Avalanche, and Seacoast Spartans. The native of Farmington Hills, MI was able to bounce back from the loss to the RoughRiders and shine during the showcase, leading his team to the top of the EHL Power Rankings.

Out of the 76 shots Beals faced during the three contests, he was able to fend away 70 of them, bringing his GAA to 1.91 and hi save percentage to .920 for the year. The 87s have a quiet schedule this week, featuring just a single rematch against the RoughRiders.

Another week has come and gone in the EHLP with eleven matchups in the books from the past week. All teams with the exception of the New Jersey 87s took the ice, continuing this year’s campaign to Providence. Per usual, there were a number of great performances and potential candidates for this rendition of our weekly honors.

The EHLP is pleased to announce that Brandon Clark (Vermont Lumberjacks), Cable Rizan (New Hampshire Avalanche) and Mike Eastman (Connecticut Chiefs) have been named the Warrior Hockey of the Week.

Clark and the Lumberjacks split their four games this past week, including pair of victories over the Walpole Express and a shootout loss to the Avalanche. Clark was the catalyst on offense, scoring a pair of goals and dishing out five assist.

The native of New York didn't dress in the matchup with the Avalanche, but then notched at least a point in all three games against Walpole. In each victory, Clark racked up three points to his name.

Rizan and the Avalanche remain undefeated as they were able to secure a pair of victories over the Lumberjacks and New England Wolves this past week. The ’01 defenseman started the week off hot finding the back of the net twice during a thrilling game with Vermont, that the Avalanche eventually won 5-4 in a shootout. During Sunday's matchup with the Wolves, Rizan was able to notch another assist to his name, as well as earn a call-up to play with the EHL team on Monday.

The Avalanche hope to keep their winning streak alive as they host the Lumberjacks this upcoming weekend for a pair of games at the Ice Den Arena.

Eastman and the Chiefs took down the defending EHLP Champions, the Wolves, on Saturday during an intense game that was eventually decided during a shootout. The ’00 netminder from Verona, NY stood tall between the pipes facing 31 shots, fending away 29 of them, which equaled out to a .935 save percentage for the game. Thanks in large part to the  strong effort from Eastman, the Chiefs brought home their first win of the season and hope to have a similar performance as they hit the road to take on the Railers Jr. Hockey Club on Saturday. 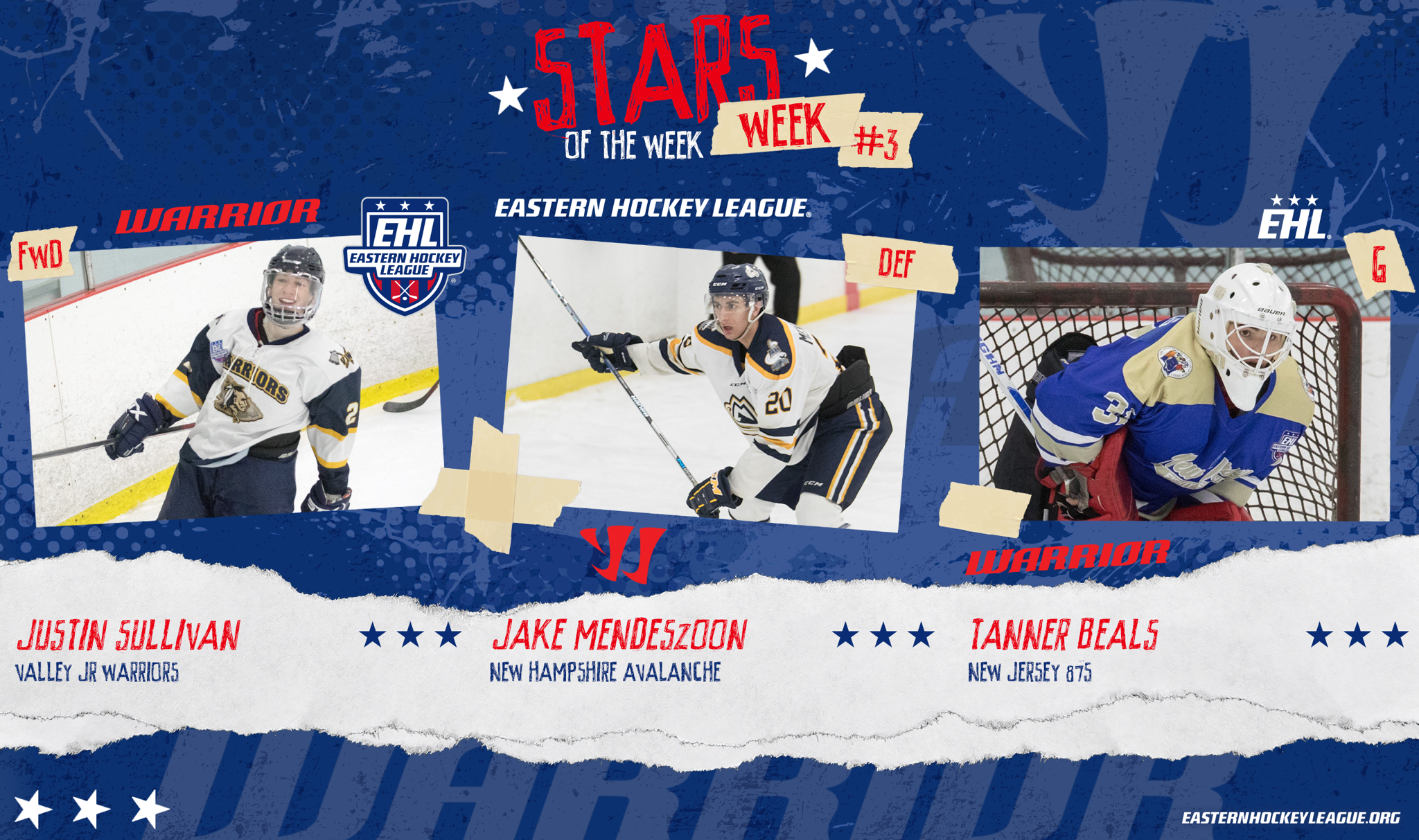 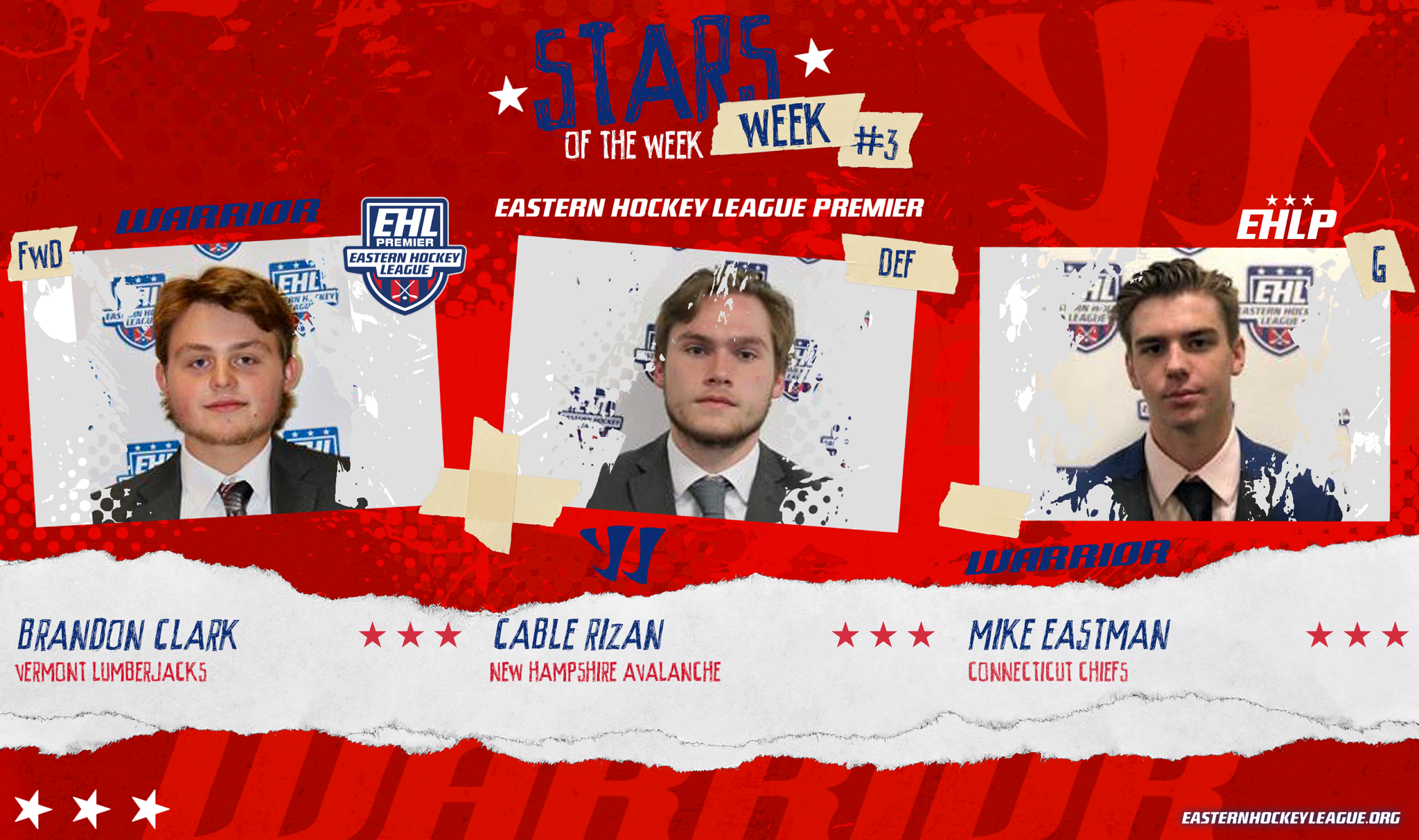