BOSTON, MA – As we turn the page to October, the first month of play in the Eastern Hockey League (EHL) and the Eastern Hockey League Premier (EHLP) is officially in the books. Throughout the course of the month, a total of 87 games were played, bringing forth a number of worthy candidates for our first set of monthly honorees. Below you'll find the Warrior Hockey Stars of the Month in the EHL and EHLP.

The EHL is pleased to announce that Victor Nikiforov (New Hampshire Avalanche), Justin Vickers (New Jersey 87s) and Kyle Penton (Valley Jr. Warriors) have been named the Warrior Hockey Stars of the Month.

Nikiforov and the Avalanche are off to another hot start this season, going 4-1-0 over the first four weeks of play. As one of of nine returners for the Avalanche, Nikiforov has already shown his strong presence within the group of forwards, tallying nine total points to his name. The ’99 forward came over to the Avalanche from the NCDC during the 2018-19 season, and was able to notch nine points in 11 regular season games, and then earned another two points during New Hampshire's playoff run to their second consecutive title

As the Avalanche look to three-peat, they will play eight more games in October with over half of them on the road, including a trip to Philadelphia for the second edition of the 2019-20 EHL Showcase Series.

Vickers and the 87s had a successful first season in the EHL during the 2018-19 campaign, as they finished one win away from making it to Providence and the Frozen Finals. Vickers is one of four defensemen returning for the 87s and hopes to continue taking great strides during their second season.

The ’99 defenseman leads the 87s in points with eight and is on track to surpass his 20 points throughout all of last year. With a 4-1-0 record during the month of September, the team hopes to stay in the win column, as they face a handful of top programs this upcoming month.

Out of all three positions, the goaltenders of the EHL stood strong this past month, making it the toughest category to select a honoree.

Penton and the Warriors are off to a great start under new head coach Ryan McGrath, as they went 5-2-0 in September. Out of the seven total games played, Penton was between the pipes for five contests, and racked up 183 saves in the opening month. Two of the most notable wins for Penton, came against the Philadelphia Little Flyers and East Coast Wizards, each of which made it to last year's Frozen Finals.

The first month of the EHLP is finished for all 13 teams, including the three new franchises who kicked off their inaugural season, the Railers Jr. Hockey Club, New Hampshire Avalanche, and New York Bridgemen. Throughout the first 28 games, there were many top performances delivered, therefore we had many candidates to choose from for the monthly honors.

Mondi and the Lumberjacks rounded out the month going 4-1-2, with the ’00 forward not only leading his team in scoring, but the entire league with 13 points. For the five games that Mondi dressed in, he was able to tally at least two points in every contest. As a result of the success the native of New York has had, Mondi was able to get the call up to the EHL team during their showcase game this past Sunday the 29th.

As the month of October begins, Mondi is on track to surpass he point total from last year as he was able to put up 35 points during 2018-19 campaign.

Rizan and the Avalanche have made a name for themselves in the EHLP after just one month of play, as they remain undefeated going 4-0-0 taking down the previous championship teams in the EHLP (Boston Jr. Rangers and New England Wolves). The Avalanche currently rank #2 in the latest set of EHLP Power Rankings.

As for Rizan, the '01 currently leads the EHLP in defensive scoring as well as power-play goals. The native of New Hampshire, recorded a point in every contest, and will look to keep things rolling with nine games on the schedule throughout the upcoming month.

As a first year franchise in the EHLP, the Railers and McKallip have jumped off to a great start, going 3-1-0 in the opening month. Just like the Avalanche, the Railers were also able to pick up a victory over the defending champion Wolves.

The ’01 netminder has been a huge asset for the Railers, standing strong between the pipes for two of the three victories. McKallip turned aside 40 of the 41 shots he faced in September, which equals out to a 0.50 GAA and a .976 save percentage. The team will look to continue their strong play with nine games in October, however, only one of those matchups will be played at the Worcester Ice Center. 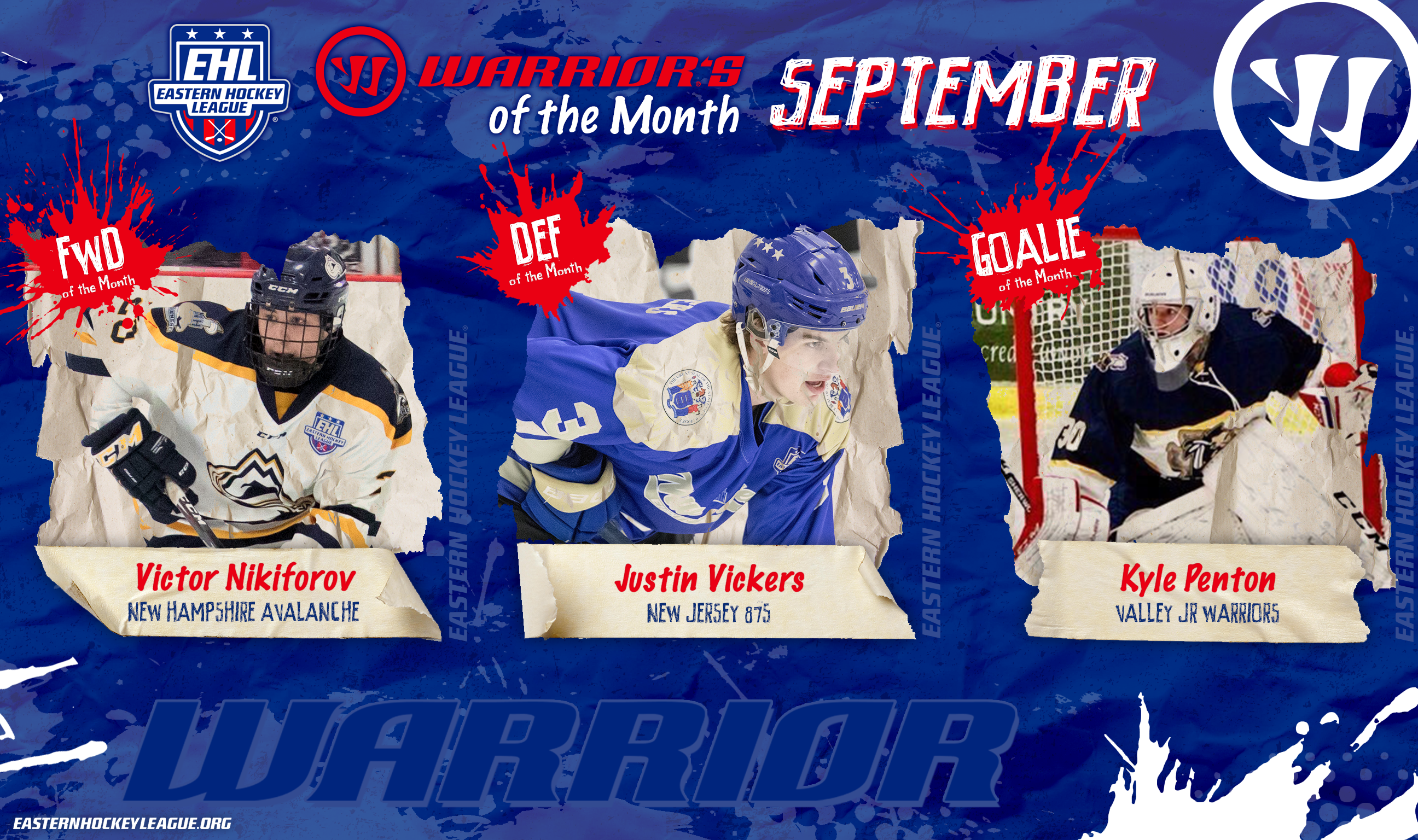 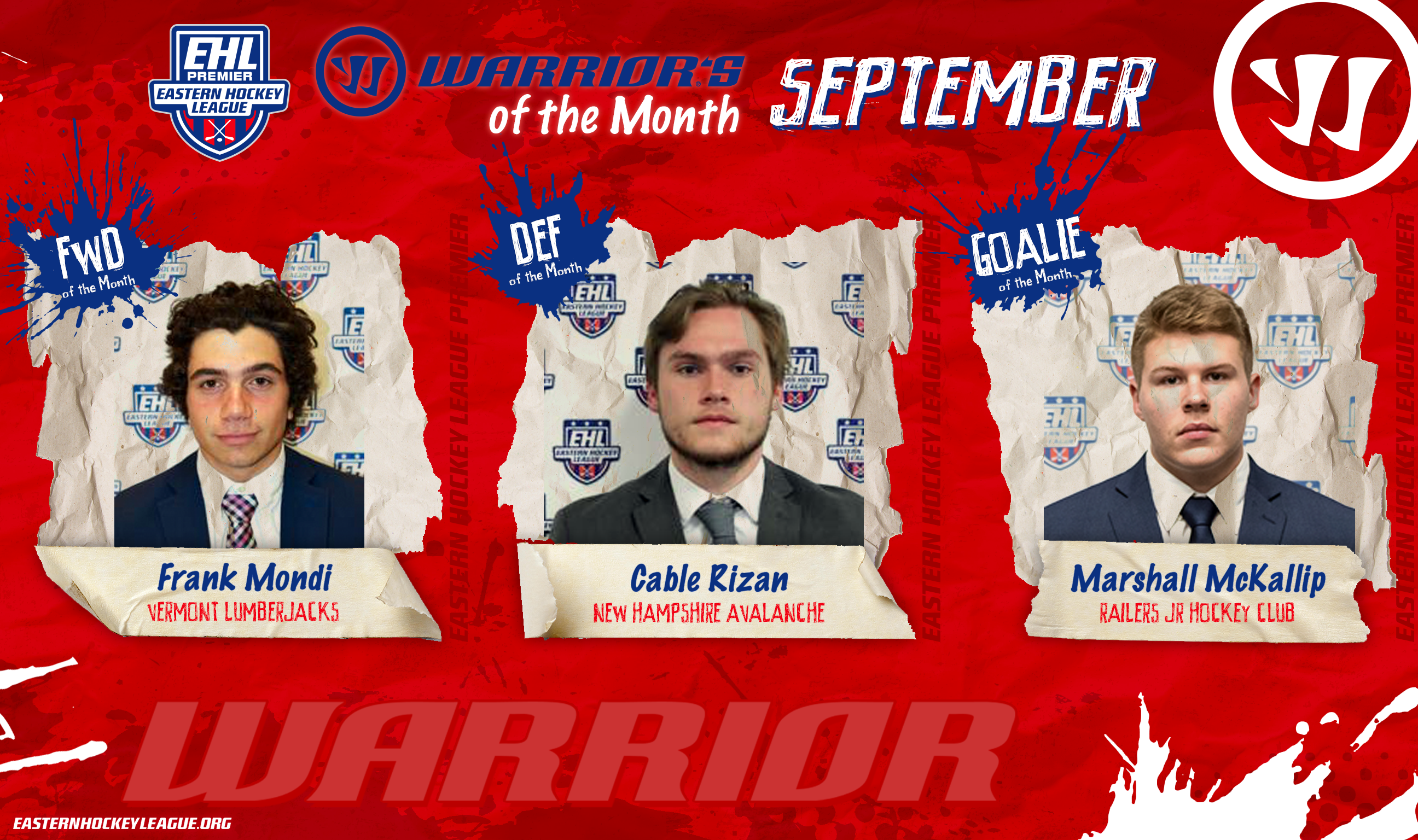