Warrior Hockey Stars of the Week #4

BOSTON, MA -- It's hard to believe, but we've already reached the middle of October, and the Columbus Day Showcase at Ice Line in West Chester, PA. The Eastern Hockey League (EHL) and Eastern Hockey League Premier (EHLP) will converge this upcoming Sunday and Monday for the 2nd event of the 2019-20 EHL Showcase Series.

Below you'll find the 4th set of Warrior Hockey Stars of the Week, from the past seven days in the EHL and EHLP.

The month of October has officially begun with the first week containing 18 total games across the board in the EHL.

As the week progressed it became clear that there were many worthy candidates for this week’s honors.

The EHL is pleased to announce that Tao Ishizuka (Connecticut RoughRiders), Will Fisher (Boston Jr. Rangers) and Brenden Carew (Connecticut Chiefs) have been named the Warrior Hockey Stars of the Week.

Ishizuka and the RoughRiders ended their week going 2-1-0 in their three games, splitting their pair of matchups with the New Jersey 87s and beating the Philadelphia Jr. Flyers on the Saturday in between. The ’99 forward from Providence, RI started his campaign for the weekly honors by scoring the RoughRiders lone goal in their loss to the 87s on Wednesday. He then continued his scoring streak by finding the back of the net once against the Jr. Flyers. Finally, Ishizuka capped off the week in grand fashion with a hat-trick against New Jersey yesterday afternoon.

Ishizuka and the RoughRiders will return to the ice this upcoming weekend, with matchups against the Railers Jr Hockey Club and Walpole Express at the showcase.

Fisher and the Rangers had a successful week, winning both of their games and improving their record up to 5-2-0 for the season. The '99 native of Minnesota got his weekend started with an assist and the game-winning goal in overtime on Friday against the East Coast Wizards. Fisher then added an assist to his totals in Saturday night's victory over the Railers. Fisher already has an even three goals and three assists in the first seven games of the season.

Similar to the RoughRiders, the Rangers will resume play this upcoming weekend in West Chester, as they are scheduled to take on the 87s on Sunday and the North Carolina Golden Bears on Monday.

Wrapping things up between the pipes, the Chiefs swept the week as they defeated the Valley Jr. Warriors (Thursday) and the Seacoast Spartans (Friday), with Carew standing tall in net for both contests.

Carew started off the week fending off the Warriors during a 5-4 overtime victory, which gave the goaltender great momentum that led to a 2-0 shutout. The 6’2” native of Canada turned in his best two performances of the season on back-to-back days, as he stopped a total of 77 shots that were sent his way.

Carew and the Chiefs are now set to face-off with the New Hampshire Avalanche at on Thursday and then again at the showcase. Connecticut will then wrap-up the weekend with contest against the Seahawks Hockey Club on Monday.

Flipping over to the EHLP, and the first 10 games of October are in the books, leading up to this weekend's showcase. Before all 13 teams began prepping for West Chester, there were a number of top performances turned in this past week.

The EHLP is pleased to announce that Matt Meli (Philadelphia Revolution), AJ Palermo (Walpole Express) and Cam Isabelle (Vermont Lumberjacks) have been named the Warrior Hockey of the Week.

Meli and the Revolution brought their record above .500 with a victory over the New Jersey Renegades on Sunday. In a 13-goal offensive explosion for Philadelphia, the ’02 native of Richboro, PA native was able to rack up an impressive six points, scoring a hat-trick and tallying three assists. Melli currently leads the EHLP in scoring with eight goals and nine assists through just five games played.

The Revolution hope to keep things rolling as they are scheduled to take on the Railers Jr. Hockey Club, New England Wolves, and Connecticut Chiefs this upcoming weekend at the showcase.

Palermo and the Express lost to the New England Wolves on Friday and then split a weekend series with the Valley Jr. Warriors, with both games requiring overtime to determine a winner. Although Palermo is the second youngest member of the Express EHLP team, he currently has the third most points with four goals and four assists in nine games. The ’03 defenseman tallied four points just this past weekend, scoring two goals and notching two assists. Palermo arguably had the most important goal of the weekend, as he found the back of net in his team's overtime victory on Saturday.

The Express are looking to bounce back from Sunday’s loss as they are scheduled to face-off against the New Jersey 87s, Philadelphia Little Flyers, and New Jersey Renegades in Pennsylvania.

Last, but not least, Isabelle and the Lumberjacks find themselves as the third-ranked team in the EHLP Power Rankings, after splitting a weekend series with the New Hampshire Avalanche.

Isabelle had a strong performance in both games despite Sunday’s loss, as he was able to fend away 76 of the 83 shots he faced throughout the weekend. With these two games under his belt, the ’00 netminder has a save percentage of .903 and the Lumberjacks currently sit in 1st place in the New England Conference with a record of 5-2-2.

This upcoming weeked Vermont has Chiefs, Renegades, and Avalanche on the schedule in West Chester. 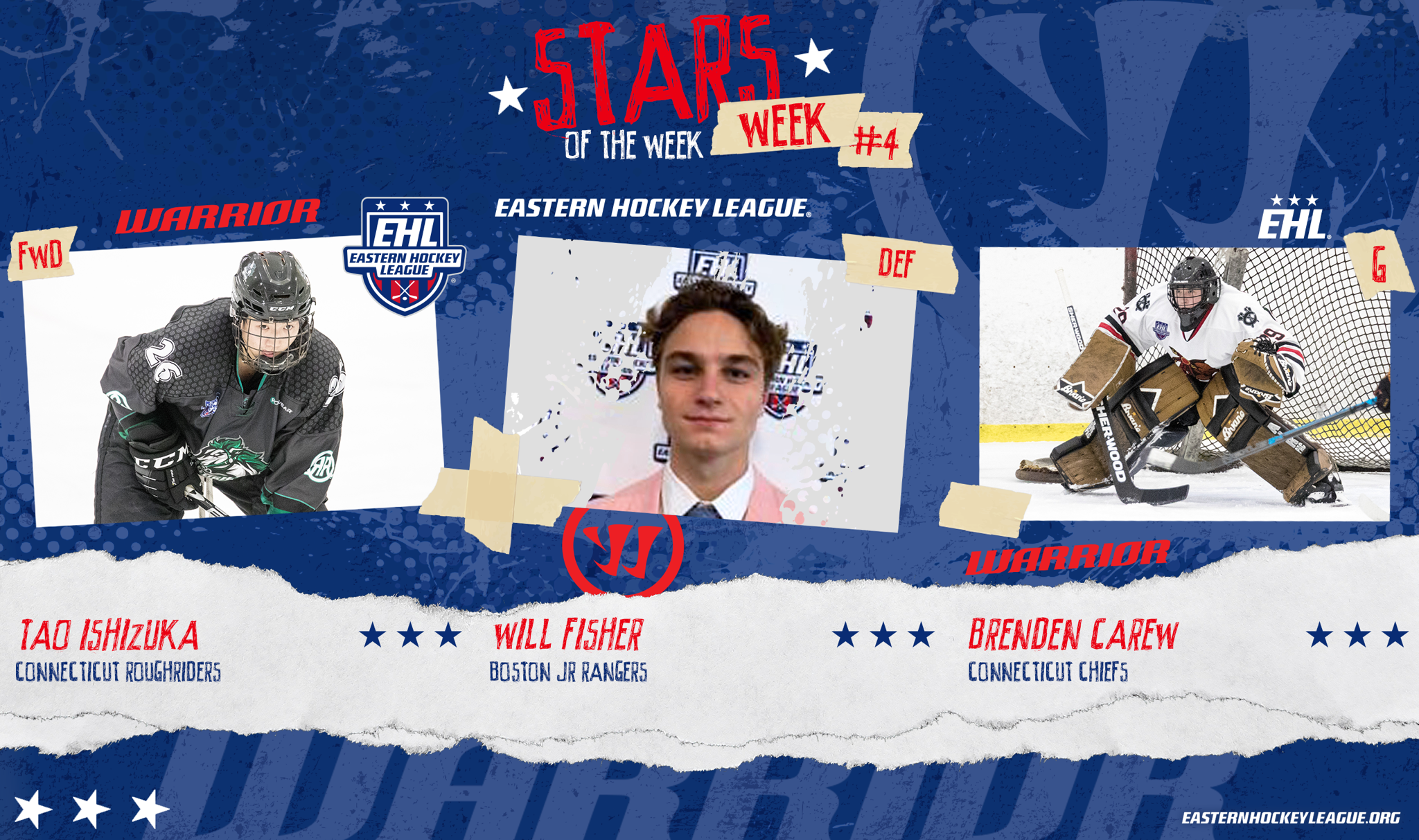 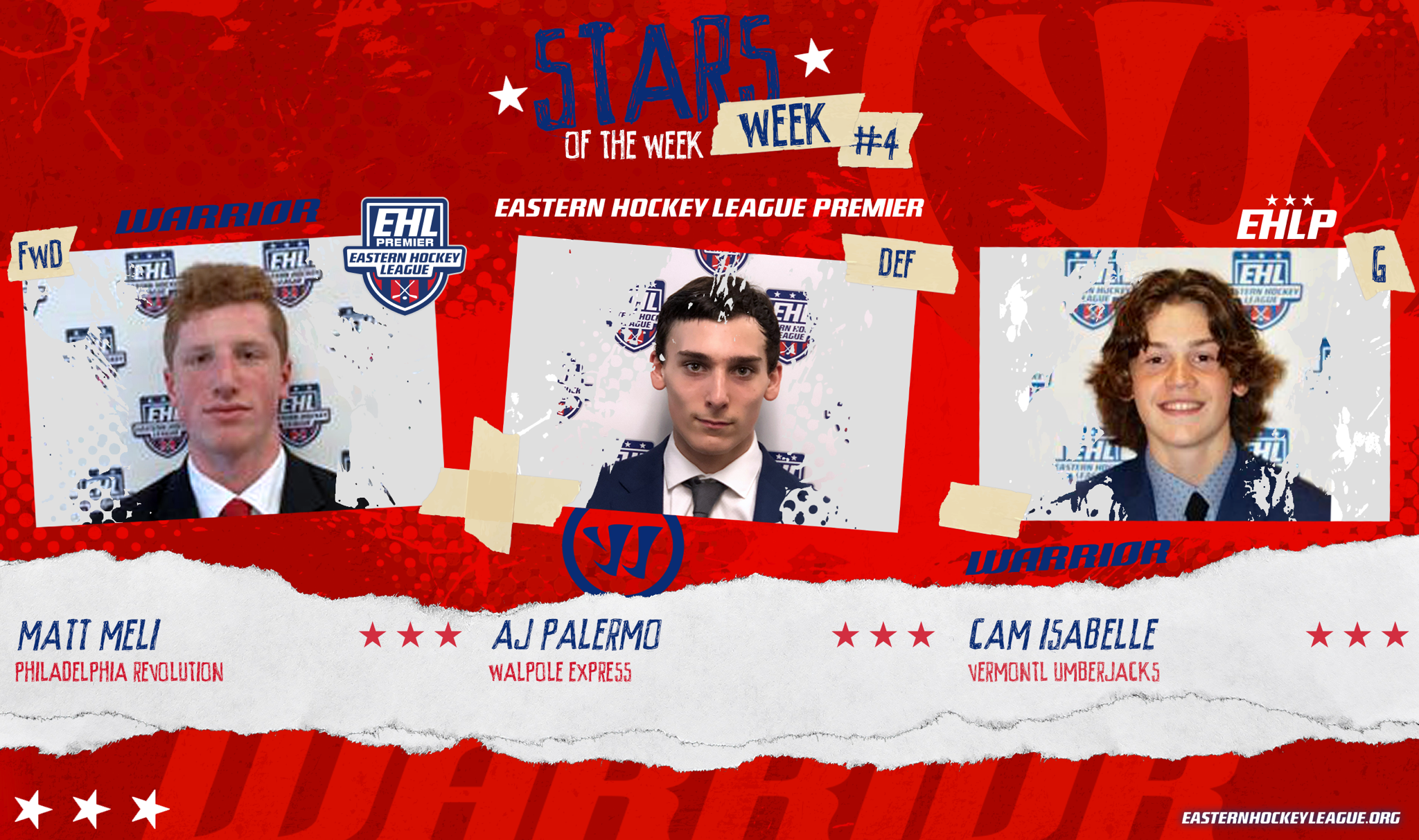