Warrior Hockey Stars of the Week #5

BOSTON, MA -- Another week in the books, as this past weekend showcased the Eastern Hockey League (EHL) and Eastern Hockey League Premier (EHLP) teams at Ice Line in West Chester, PA. There were many top performances from all across the league, as it was another successful event in the 2019-20 EHL Showcase Series.

Below you'll find the 5th set of Warrior Hockey Stars of the Week, from the past seven days in the EHL and EHLP.

The West Chester showcase was loaded with top plays and performances from all across the league.

The EHL is pleased to announce that DJ Schwenke (New England Wolves), Cade Hanley (Seahawks Hockey Club) and Billy Girard (Boston Jr. Rangers) have been named the Warrior Hockey Stars of the Week.

Starting with Schwenke, the '99 native of Colorado Springs, CO kicked off his week with a pair of goals, including the game-winner, this past Wednesday against the Valley Jr. Warriors. The veteran forward followed up that performance with three goals and an assist in showcase victories over the Philadelphia Little Flyers and New Jersey 87s. For the season Schwenke now has 15 points (10 goals, 5 assists), through his team's first 11 games of the year.

Looking ahead, the Wolves currently sit in 4th place in the New England Conference, with a big home-and-home series coming up this weekend against the Rangers.

Sticking with the New England Conference, Hanley and the Seahawks have now won four straight and six of their last seven, thanks to a trio of victories this past week.

The weekend began with Hanley picking up an assist in a 7-0 victory over the Warriors on Friday night. The '99 native of Montana then scored the overtime-winner against Team Maryland on Sunday, and wrapped things up with another assist against the Connecticut Chiefs on Monday. For the season, Hanley now has eight points through his first 12 games, which puts him on a great pace to surpass the 24 total points he tallied last season.

Wrapping things up between the pipes, and there were a number of netminders that shined this past week. However, Girard stood the tallest in the biggest matchup of the weekend. The '99 native of Boca Raton, FL made 27 saves against New Jersey 87s on Sunday, and picked up his 5th victory of the season.

Overall, Girard is now 5-2-0 through his first seven starts and he owns a 2.13 GAA to go along with a .936 save percentage. After losing a pair in a row in late September, the Rangers have now won six straight games and have worked their way into the EHL Power Rankings.

Flipping over to the EHLP, and there were equally as many players that shined throughout the holiday weekend in Pennsylvania.

The EHLP is pleased to announce that Ricards Jelenskis (New England Wolves), Jake Maley (New Hampshire Avalanche) and Ryan Warren (Railers Jr. Hockey Club) have been named the Warrior Hockey of the Week.

Jelenkis and the Wolves traveled down to the first showcase of the season and won all three of their games, knocking off the New Jersey 87s, Philadelphia Revolution, and New York Bridgemen. In total, the 2001-born native of Latvia tallied five goals and two assists, increasing his season total up to 11 points for the year. The big weekend for Jelenkis included the overtime winner against New Jersey on Sunday, and more than doubled the four total points that he had racked up heading into the showcase.

Coming up this weekend, the Wolves have two big matchups, starting with the Railers on Saturday, and followed up by a contest against the Boston Jr. Rangers on Sunday.

Moving back to the blue line, and a three-win week for Maley and the Avalanche helped New Hampshire push their way to the stop spot in the EHLP Power Rankings for the first time this season.

The 2001-born native of San Ramon, CA scored three times in three games this past week, and added a pair of assists to his name as well. In total, Maley now has six points in seven games, and his team is 6-1-0 when he is in the lineup.

We put a bow on things with Ryan Warren between the pipes, with this being his second weekly honor of the season (Warrior Hockey Stars of the Week #1). Warren picked up wins against the Philadelphia Revolution and Philadelphia Little Flyers this past weekend, turning aside 45 of the 46 shots he faced.

Paired with the Goalie of the Month from September, Marshall McKallip, Warren has helped his team jump out to an 8-2-0 start in their first ten games of the season. As a new week now begins in the EHLP, the Railers are currently tied with the Avalanche for first place in the New England Conference. 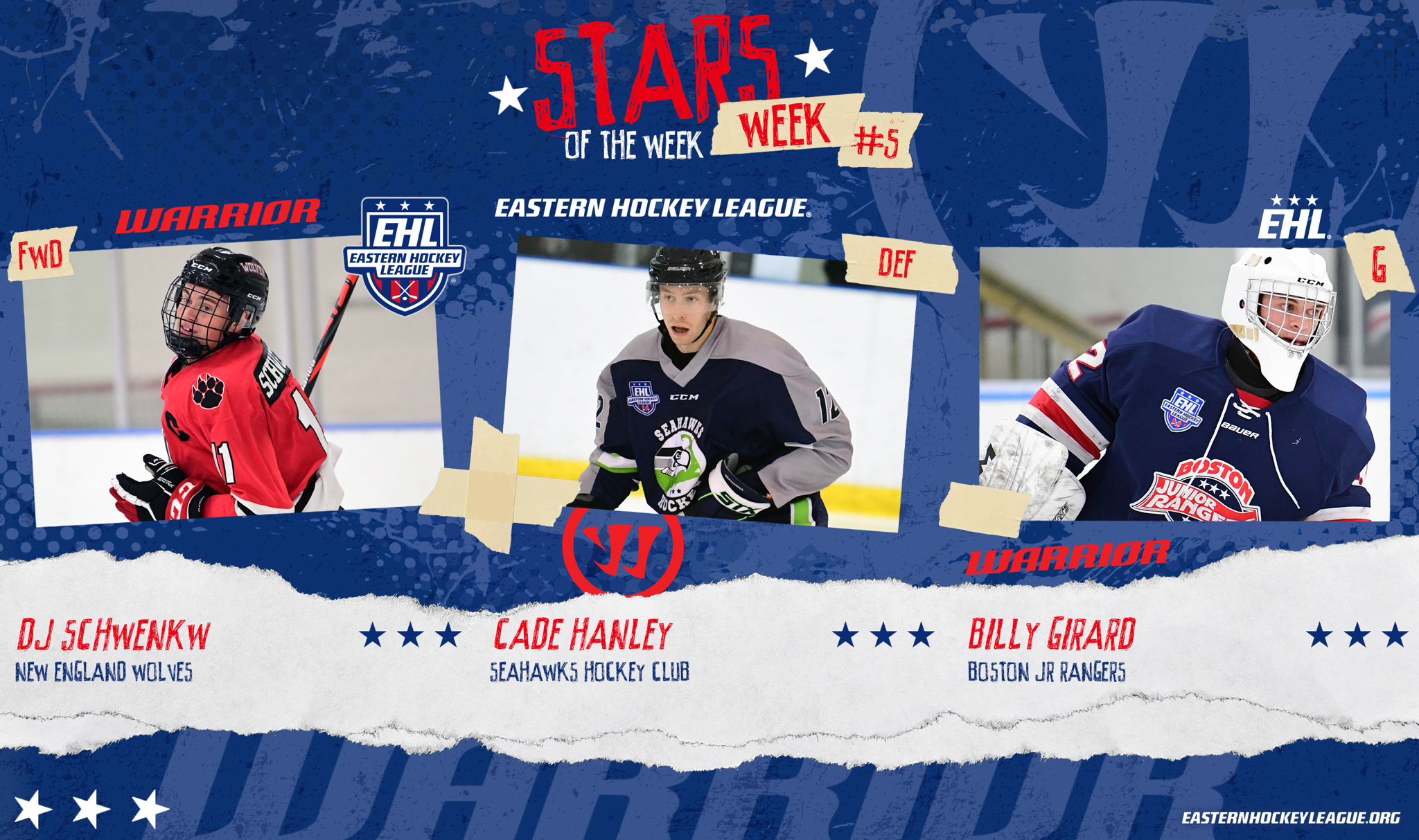 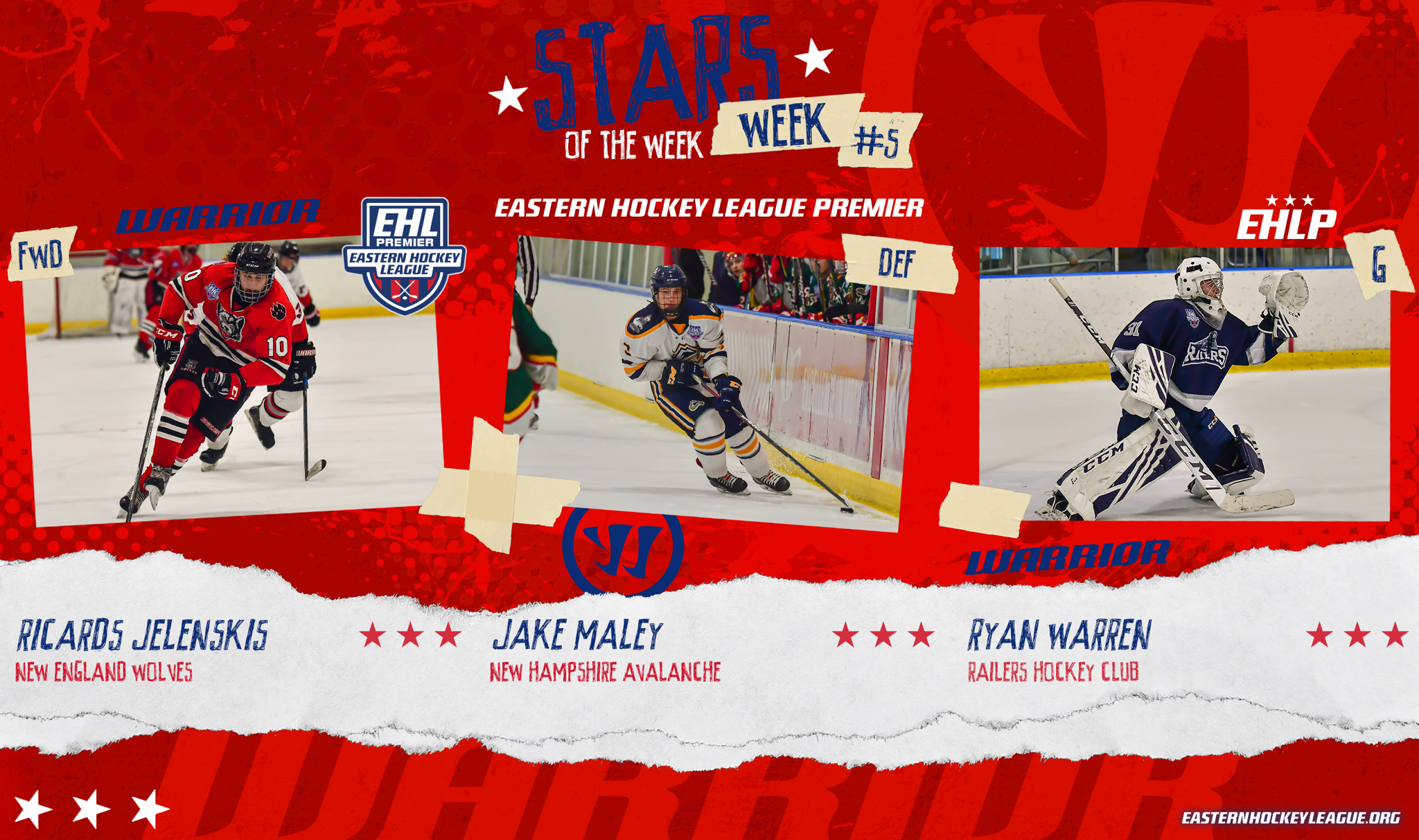