Below you'll find the Warrior Hockey Stars of the Month in the EHL and EHLP.

The month of October was special for DiScanio, not just because of the 16 points he put up in just six games for the Lumberjacks, but also from the experience he gained with the EHL All-Star Team. Paired alongside his Vermont linemate, Austin Marini, DiScanio was able to put the exclamation point on Team EHL's 5-1 victory over Salem State.

Overall, the final season of junior hockey has started as well as DiScanio could have hoped, and the veteran forward is well on his way towards setting new career highs this season. In DiScanio's first year with the Lumberjacks (2017-18), he tallied 38 points in 43 total games. Move along to this past season, and DiScanio increased those numbers up to 60 points in 50 total games. Now, to date this year, the '99 native of New York has 27 points in 13 total games. The Lumberjacks will continue to lean on their captain throughout the 2019-20 season.

Sticking with the Lumberjacks theme, and October was also a great month for Beers. The '99 native of Peabody, MA more than doubled his point total in the 2nd month of the season, adding 10 points to his name. For the year, Beers now has four goals and 14 assists through the first 13 games.

Looking ahead for DiScanio and Beers, and November brings an instant challenge, as the month kicks-off with a two-game series against the New Hampshire Avalanche. Following the two games at home this weekend, the Lumberjacks have seven more games on the schedule this upcoming month, but only one of those games is taking place on home ice.

Wrapping things up between the pipes, and we shift down south to one of the hottest teams in the Mid-Atlantic Conference. Hansson and the Jr. Flyers posted a record of 7-3-0 in the month of October, and the 2000-born native of Sweden was between the pipes for four of those victories. After losing his first start of the month against the Connecticut RoughRiders, Hansson then strung together four straight wins over the likes of the Philadelphia Revolution, Railers Jr Hockey Club, Team Maryland, and Philadelphia Little Flyers.

Along with the 4-0-0 record in those games, Hansson owned a 1.26 GAA in the matchups and a .955 save percentage. Looking ahead to the November schedule, and the Jr. Flyers will hit the ice for 10 total games this month, with half of their contests coming against teams that have appeared in at least one set of EHL Power Rankings to date.

Malandruccolo and the Rangers won five of their six games in the month of October, outscoring their opponents 44-18 in that stretch. Of the 44 goals that the Rangers scored, the 2001-born native of New York found the back of the net 11 times and dished out another six assists. For the season, Malandruccolo now has 29 points through 11 games, and he's only been held completely off the scoresheet once.

Looking ahead, the Rangers sit in 3rd place in the New England Conference standings, and they will continue their push towards catching the two teams in front of them with ten games on the schedule in November. It's worth noting however, that only two of this month's matchups will take place on home ice for the Rangers.

Moving back to the blue line and Matejka is enjoying a great start to his 2nd season with the Wolves. Through the first 15 games of the season, the 2001-native of Georgia has tallied 14 total points, which puts him well on pace to surpass the 15 total points he tallied throughout the entire 2018-19 season.

Matejka and Wolves begin the month of November tied with the Rangers and the Vermont Lumberjacks for 3rd place in the New England Conference. The upcoming schedule includes 10 games this month, with the first five on the road, and last five at home.

Make that two months in a row for the Railers, as Warren is named the top goaltender for the month of October. Marshall McKallip took home the honor in September, and then a five-win month of October made Warren the clear choice. Overall, the 2001-born native of North Attleboro, MA posted a record of 5-1-0 in six starts this past month. Included in those victories was a 21-save shutout against the Philadelphia Little Flyers, which went in the books as the first loss of the season for the 1st-place team in the Mid-Atlantic Conference.

For the year, Warren owns a record of 7-2-0, to go along with a 2.07 GAA and a .912 save percentage. In their first season, Warren and the Railers continue to battle with the New Hampshire Avalanche, for the top spot in their conference (New England). 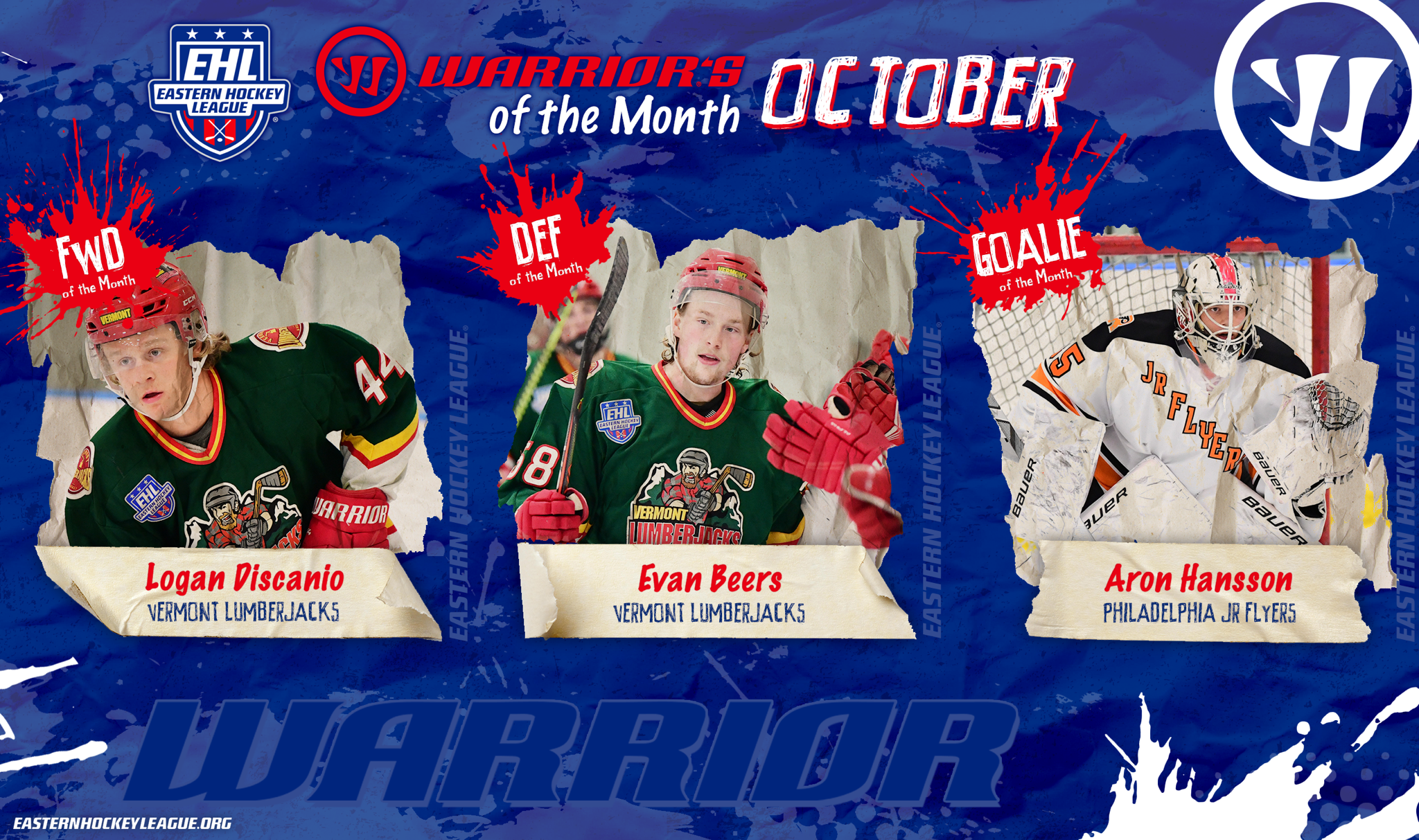 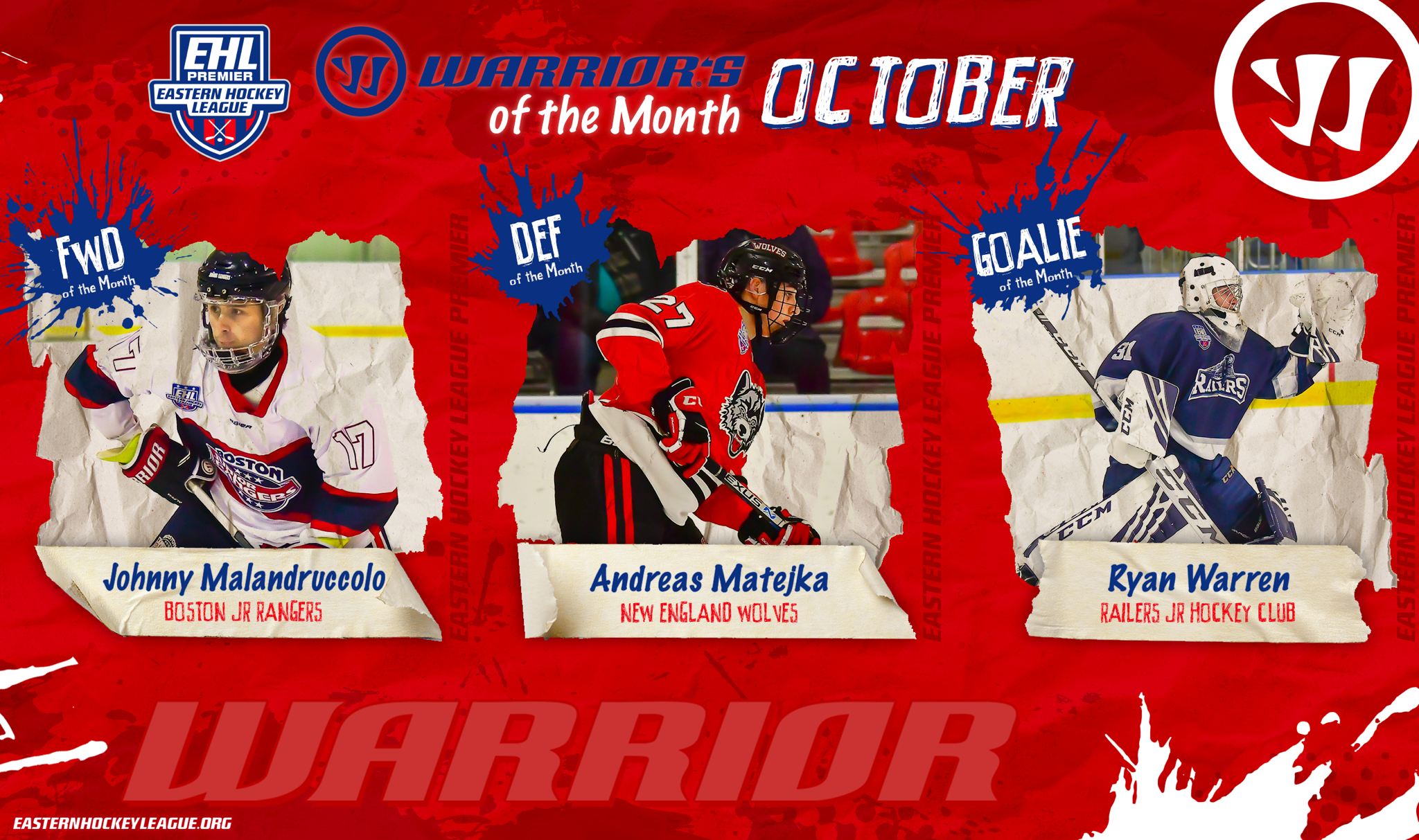