Warrior Hockey Stars of the Week #9

As for the EHLP, the lone showcase remaining takes place over Martin Luther King Weekend in Worcester, MA.

Below you'll find the 9th set of Warrior Hockey Stars of the Week, from the past seven days in the EHL and EHLP.

The past seven days in the EHL featured 27 total games, 18 of which took place at the November Showcase in Haverhill, MA. With all 19 teams in action, and a number of tight matchups, the league saw many top performances delivered from all across the #Eshow.

The EHL is pleased to announce that Kevin Brown (Philadelphia Little Flyers), Mitchell Haight (Boston Jr. Rangers), and Tristan Hadley (Seahawks Hockey Club) have been named the Warrior Hockey Stars of the Week.

Brown and the Little Flyers began the week with a 5-2 loss at the hands of Team Maryland, but then turned things around quickly with showcase victories over the Seacoast Spartans (3-1) and Boston Jr. Rangers (7-4). Of the 10 goals that the Little Flyers scored during the pair of showcase games, Brown played a role in nine of the tallies, adding four goals and five assists to his season totals.

Speaking of those totals, the '99 native of Springfield, PA now has 25 points through 21 games to date, which puts him on a great pace to surpass the 45 total points he racked up in all of last year. Looking ahead, Brown and the Little Flyers find themselves right in the thick of things in the Mid-Atlantic Conference, with a big stretch of home games coming up.

Moving back to the blue line, and Haight's big week helped prove once again, why the Rangers' captain was an easy selection for the 2019 All-Star Team. In three games for the Rangers, the 6'4" native of Pittsford, NY notched a total of five assists to his name. With now 19 points through 17 total games to date, Haight has already tied his season totals for scoring from this past season.

In between the pipes, Hadley got the call for the back end of the November Showcase, and he made the most of his opportunity. The 2000-born native of Gilbert, AZ turned aside 24 of the 25 shots he faced, in a 3-1 victory over the New Jersey 87s. For the season, Hadley now owns a mark of 6-1-0 to go along with a 1.07 GAA, a .954 save percentage, and three shutouts.

Looking ahead, Hadley and the Seahawks have now won six straight games, and find themselves one point behind the Vermont Lumberjacks for the top spot in the New England Conference. The Seahawks have 11 games left before we turn the calendars over to 2020, and seven of those matchups will send the team on the road throughout their respective conference.

The past seven days in the EHLP featured all 13 teams and 22 total games, 19 of which took place at the November Showcase.

The EHLP is pleased to announce that Ryan Bailey (Boston Jr. Rangers), Aaron Damren (Vermont Lumberjacks), and Tyler Cassidy (Philadelphia Little Flyers) have been named the Warrior Hockey Stars of the Week.

Bailey and the Rangers began the weekend with a 7-2 victory over the Connecticut Chiefs on Friday night, and then picked up victories of 7-0 (New Jersey 87s) and 7-4 (Philadelphia Revolution) at the showcase. Unfortunately the weekend was spoiled with a 2-1 loss at the hands of Little Flyers, but the Rangers still stand at 14-3-0 through their first 17 games.

As for Bailey, the 2000-born native of Anchorage, AK, notched an even five goals and five assists in the four games. For the season, Bailey now has 19 goals and 14 assists, while having dressed in every game to date. Coming up this weekend, Bailey and the Rangers will travel to take on the Valley Jr. Warriors on Friday night, and then remain on the road for a matchup with the Railers Jr. Hockey Club on Sunday.

On the blue line, Damren was one of the standout performers this past weekend, while dishing out four assists in a pair of games. For the season the Lumberjacks' captain now has 13 points through 18 total games, which matches his regular season total from a year ago.

Looking ahead, Damren and the Lumberjacks currently find themselves in 5th place in the New England Conference, with three matchups this weekend against the 4th-place New England Wolves.

Wrapping things up between the pipes, and combined with the EHL team, the Philadelphia Little Flyers posted a perfect record of 5-0-0 at the November Showcase. Philadelphia's EHLP team notched a trio of those victories with Cassidy in goal for the wins over the Connecticut Chiefs and the Boston Jr. Rangers.

In total, the 2001-born native of Havertown, PA stopped 63 of the 65 total shots that were sent his way, while improving his record up to 6-1-1 for the season. The stellar weekend for Cassidy also helped lower his GAA down to 1.81, and raise his save percentage up to a .942 mark. 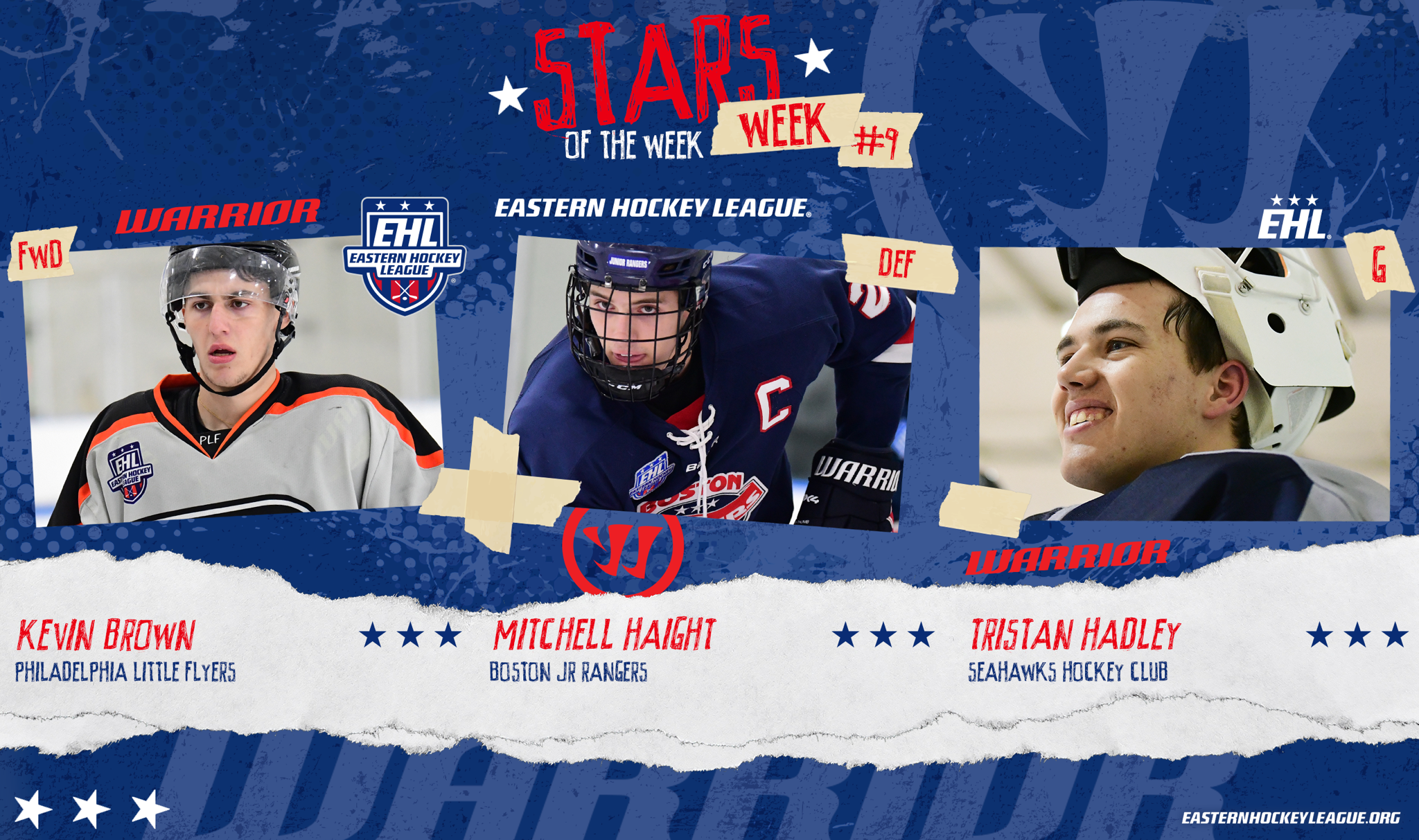 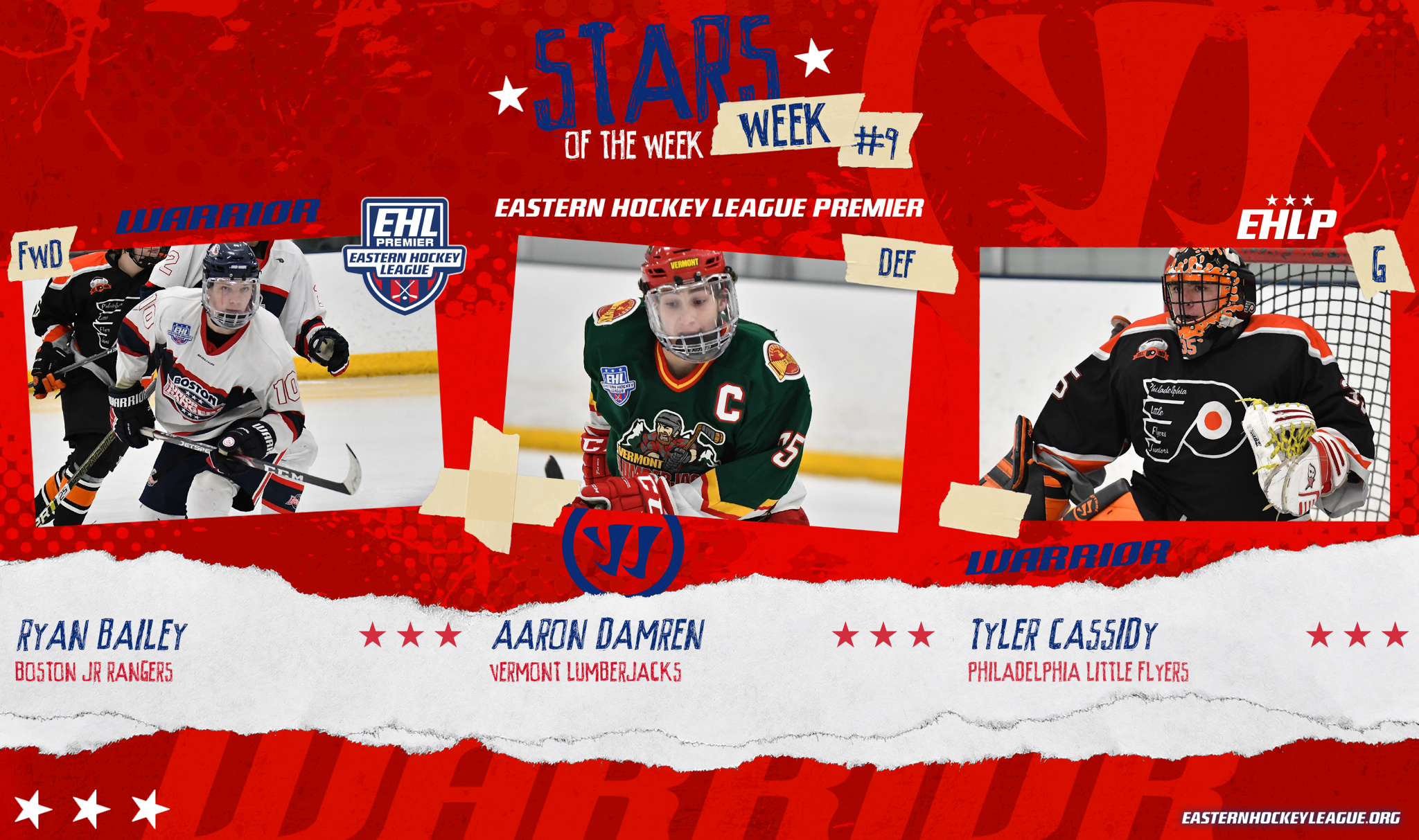