Below you'll find the Warrior Hockey Stars of the Month in the EHL and EHLP.

As for November of 2019, Leja found the back of the net eight times this past month and assisted on another 13 tallies for his team. Overall the 23 total points runs his season total up to 39 for the year. In terms of the league leaders, Leja currently sits 3rd in scoring, only trailing Logan DiScanio (49 points) and Geordan Buffoline (41 points) of the Vermont Lumberjacks.

Starting on the blue line with Haight, an All-Star defenseman and the Rangers' captain this season. The '99 native of Pittsford, NY scored a goal and collected 11 assists this past month, running his season total up to 24 points for the year. That total is already tied for how many total points he notched combined between the 2017-18 and 2018-19 seasons. The leader of the Rangers uses his size to his advantage, and the 6'4" defenseman played a key role in his team posting a record of 10-1-0 in November.

Of those 10 wins, Girard was between the pipes for seven victories, running his overall record up to 14-4-0 for the year. The '99 native of Boca Raton, FL played alongside Haight on the 2019 EHL All-Star Team and has garnered the attention of numerous NCAA scouts throughout the year. With a 2.17 GAA and .932 save percentage, Girard is easily regarded as one of the top three goaltenders in the EHL, and he will need to continue to play that way in the parity-filled New England Conference.

Starting up front, and this is the 2nd award of the season for Jelenskis, as he was also named the top forward following the October Showcase in Pennsylvania (Warrior Hockey Stars of the Week #5). As for this past month, the 2001-born native of Latvia scored 11 goals and collected 11 assists, in 10 total games for his team. Overall, Jelenskis has an even 20 goals and 20 assists through his first 24 career junior hockey games.

The Wolves posted an impressive 8-2-0 record this past month, and climbed all the way up to 4th place in the New England Conference standings.

Speaking of repeat award winners, Anastasi was just named the top defenseman this past week (Warrior Hockey Stars of the Week #11). Overall, the 2002-born native of Andover, MA put together a great month on the blue line, tallying a trio of goals and six assists to his name.

The Railers find themselves just ahead of the Wolves in the New England Conference, as their 34 total points puts them in a tie for 2nd place with the Boston Jr. Rangers.

Sticking with the trends, Carmen was recently recognized alongside Anastasi back in week #11. The 2002-born native of Egg Harbor, NJ put together a great month of November, going 5-1-0 in his six starts, and lowered his GAA down to 2.14 for the year. Overall, the young netminder is 9-1-0 in his first 10 career junior hockey starts.

Looking forward, the 87s find themselves seven points behind the Philadelphia Little Flyers for the top spot in the Mid-Atlantic Conference, but they do own three games in hand over their rival. The two teams will face-off on Sunday, December 15th and then four more times before the regular season concludes. 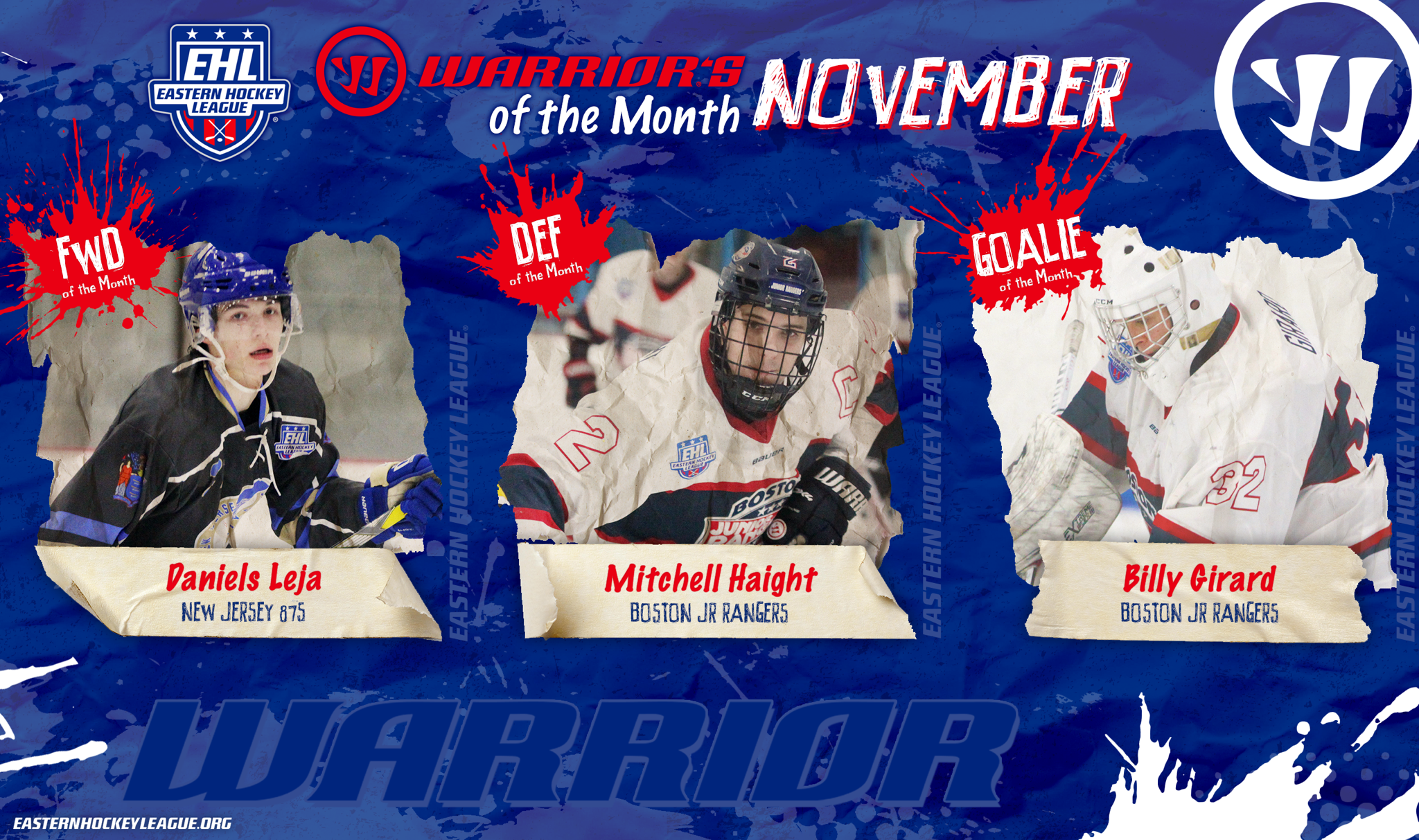 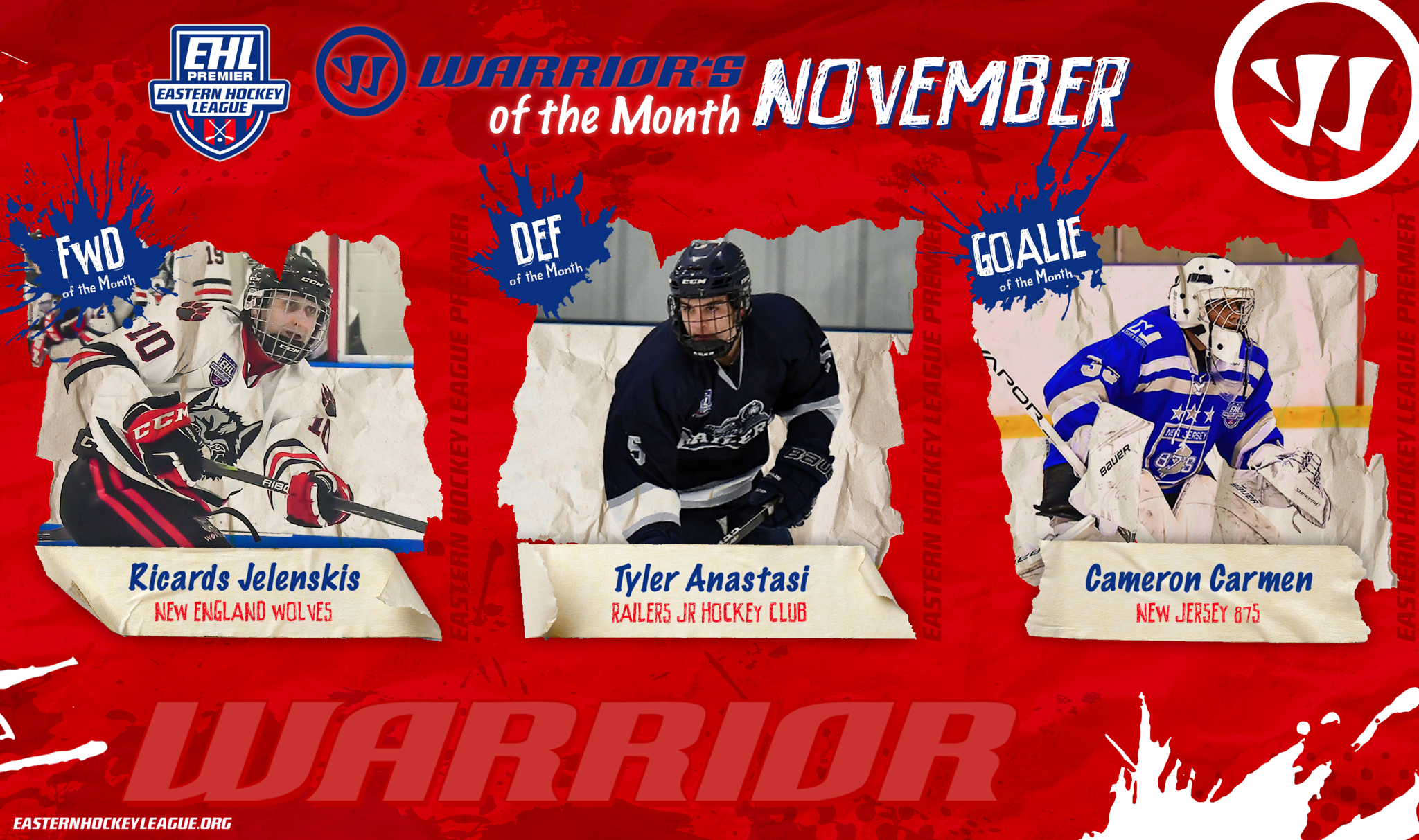