MONTREAL, QC -- Earlier this morning the Montréal Canadiens announced that Cayden Primeau would get the start in goal tonight, when they host the Colorado Avalanche at 7:00pm. After seeing action during one of the preseason games in September, tonight will serve as Primeau's official debut in the National Hockey League (NHL). 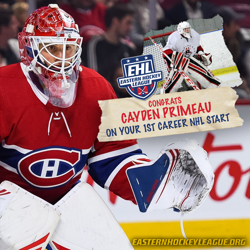 "I talked to him early this morning. Now I'm going to leave him alone. It's up to him to do his preparation and be ready to play tonight," said Canadiens head coach Claude Julien. "My message to him is - 'Be true to yourself. Play with confidence. Do what you've done to get here, and if you do that, you're going to give us a good chance of winning a hockey game.'" -- Quote via Matt Cudzinowski (@CanadiensMTL / canadiens.com)

Primeau began his junior hockey career during the 2015-16 season with the Philadelphia Revolution. Despite being the youngest player in the EHL that year, Primeau posted a remarkable 1.86 goals against average to go along with a league-leading .951 save percentage. At the end of the season, Primeau was named the EHL Goalie and Rookie of the Year, and he's only continued to climb from there.

Looking back on Primeau's pair of seasons with the Northeastern Huskies, and the list of accomplishments is beyond impressive, starting with this past year's Hockey East Championship. Prior to winning the conference in March, Primeau helped his program make it back-to-back Beanpot titles in early February.

Following his time with the Huskies, Primeau signed with Montreal, and has played 12 games for Rocket Laval so far this season. Overall, Primeau owns a 7-4-1 record in his first 12 games in the American Hockey League (AHL), to go along with a 2.58 goals against average and .910 save percentage.

The Eastern Hockey League would like to congratulate Cayden on the final step, and we can't wait to watch him make his debut tonight in the NHL.