Warrior Hockey Stars of the Week #12

Below you'll find the 12th set of Warrior Hockey Stars of the Week from the past seven days in the EHL and EHLP.

It's a busy time in the EHL, with the December Showcase set to kick-off tomorrow morning at 10:00am.

As for this past week, the EHL is pleased to announce that Brent Rickett (Boston Jr. Rangers), Dan Barry (Vermont Lumberjacks), and Duncan Nichols-Delay (Philadelphia Revolution) have been named the Warrior Hockey Stars of the Week.

Rickett and the Rangers were able to extend their win streak out to eight games, and remain the top team in the New England Conference after sweeping their a home-and-home series with the East Coast Wizards. The series began Friday and led to an overtime win for the Rangers, where Rickett was able to notch an assist on the game-tying goal. The ’99 native of Portland, ME was able to shine Saturday as he racked up a total of five points during the Rangers' 6-3 victory. Rickett tallied his first career hat-trick, while also assisting on two other Rangers' goals.

Barry and the Lumberjacks picked up four points this past weekend, after sweeping the Connecticut Chiefs. With the pair of wins the Lumberjacks maintained control over 2nd place in the New England Conference with 39 points, just three points behind the Rangers for the top spot. The 6'4" native of St. Louis, MO was able to tally three total points throughout the weekend series, scoring a goal in each game and tallying an assist during the opener. The Lumberjacks hope to keep things going as they take on the Walpole Express in Connecticut this coming Thursday.

Nichols-Delay and the Revolution were victorious with all three of their games this past week, and named the 5th-ranked team in the latest set of EHL Power Rankings. Nichols-Delay stood tall in net for two of the three Revolution contests, bringing his overall record up to 5-1-0. The ’01 native of Canada faced 64 total shots split between the Philadelphia Jr. Flyers and Team Maryland, and made 62 total saves. The Revolution are now set to take on the Seacoast Spartans and Jr. Rangers as they head to this week's showcase.

The EHLP is back from the Thanksgiving break, with a few weeks left before all the players head home for the holiday season.

The EHLP is pleased to announce that Preston Cloutier (Railers Jr. Hockey Club), Nick Speckhart (Vermont Lumberjacks), and Jake Stern (Philadelphia Revolution) have been named the Warrior Hockey Stars of the Week.

Cloutier and the Railers split their pair of games this past weekend, falling to the Boston Jr. Rangers on Saturday and then knocking off the Valley Jr. Warriors on Sunday. The ’03 forward led the offense for the Railers, as he was able to pick up four total points over the course of the weekend. Despite falling to the Rangers, Cloutier was able to score one of the two Railers' goals. Cloutier then led his team to victory against the Warriors tallying a hat-trick, scoring all but one of the Railers' goals. As the Railers and Jr. Rangers are now tied for 2nd place in the New England Conference, they hope to have a successful upcoming weekend with home matchups against the Connecticut Chiefs and Walpole Express.

Following in line with their EHL team, Speckhart and the Lumberjacks were able to finish off the sweep of the Chiefs at the EHLP level, picking up four points over the weekend. The ’01 native of Connecticut tallied two points during game one, scoring a goal and assisting on another, before scoring an additional goal on Sunday. Speckhart now leads all Lumberjacks' defensemen with 16 points for the season. The Lumberjacks will resume play on the 21st as they will host the Express for a pair of games before departing for the holiday break.

Stern and the Revolution picked up four huge points this past weekend, taking down the 1st-place Philadelphia Revolution and the New York Bridgemen. The ’03 netminder held things down between the pipes against the Little Flyers, as he was able to fend away 22 of the 24 shots he faced in a 3-2 overtime victory. As the Revolution now sit in 3rd place, they hope to keep things going in the right direction with matchups against the Bridgemen and New Jersey Renegades this upcoming weekend. 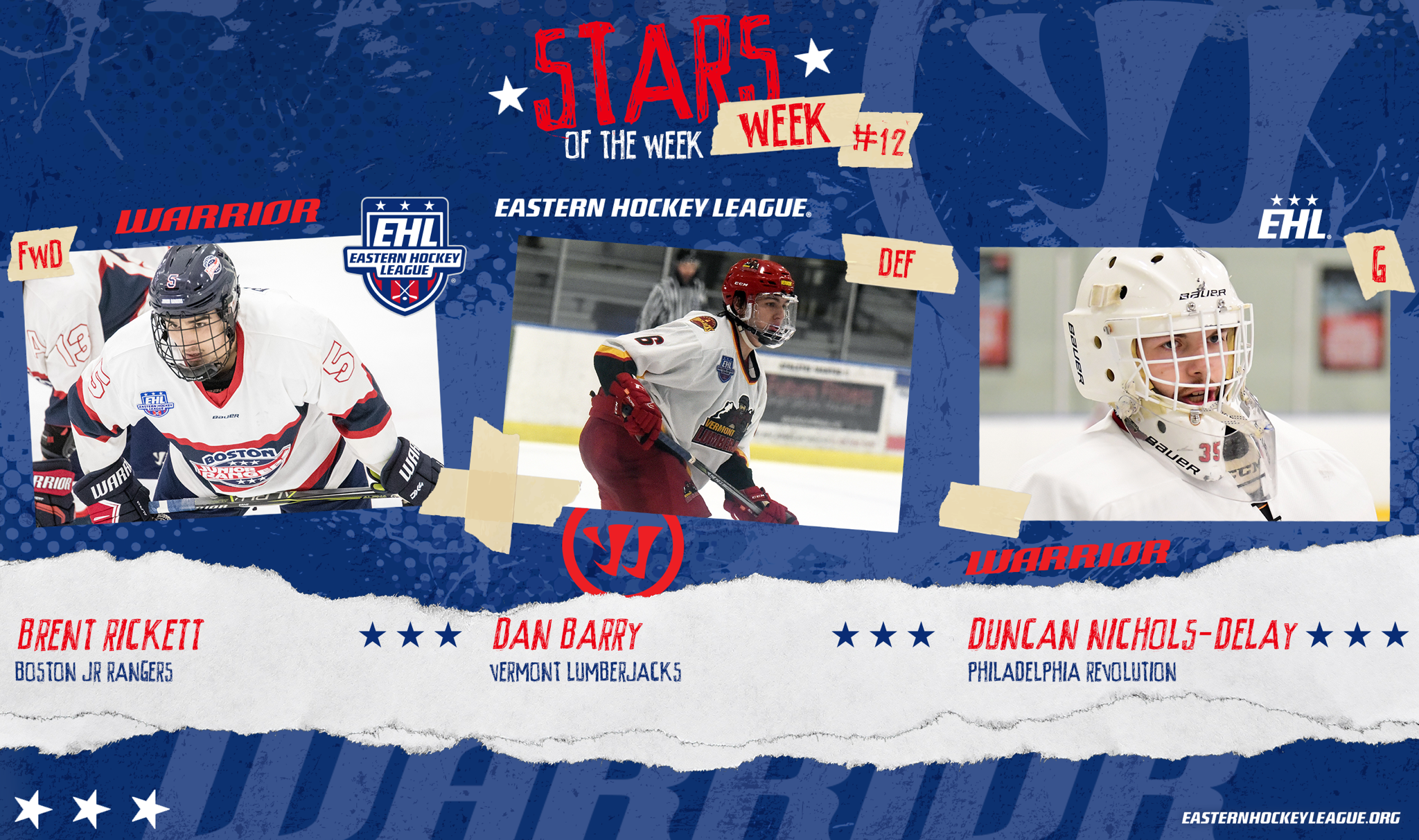 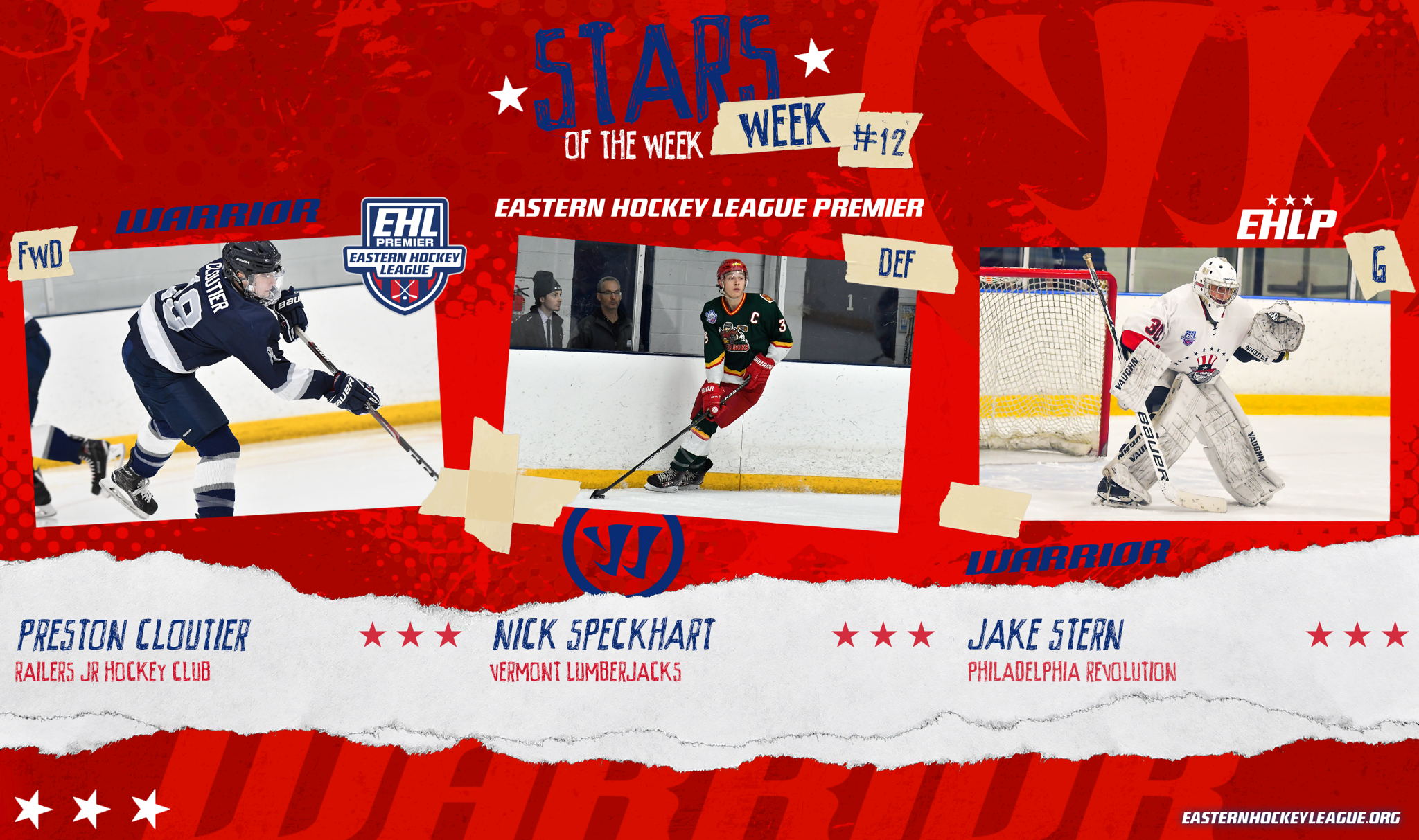