Warrior Hockey Stars of the Week #15

Below you'll find the 15th set of Warrior Hockey Stars of the Week from this past weekend in the EHL and the EHLP.

The EHL is pleased to announce that Cody Rumsey (Team Maryland), Trevor Cear (New Jersey 87s), and Duncan Nichols-Delay (Philadelphia Revolution) have been named the Warrior Hockey Stars of the Week.

Rumsey and the Team Maryland kicked-off the new year in a big way, snapping their seven-game losing streak with a 9-6 victory on Saturday over the Philadelphia Little Flyers. The '99 native of York, PA, turned in his best game of the season, notching five total points, which increased his season total up to 27 through 29 games. Rumsey led the Team Maryland offense by netting one goal and assisting on four others. With a great start to 2020, Team Maryland hopes to keep things moving in the right direction with a busy week ahead as they take on the Little Flyers again on Friday, before heading up to Exeter, NH for our final showcase of the season, where they will faceoff with the East Coast Wizards on Sunday and the Boston Jr. Rangers on Monday.

Cear and the 87's maintained their control over 1st place in the Mid-Atlantic Conference, with an overtime victory against the New York Apple Core on Saturday. The three-year veteran, who started in the EHLP (2017-18), has already surpassed his 2018-19 point total of 21 points.

Cear, the second-year assistant captain, was able to tally two assists, including the assist on the game-winning goal in overtime, bringing his overall total up to 23 points in 27 games for the year. The 87’s will face-off with the Applecore again on Wednesday, before taking on the Philadelphia Jr. Flyers on Friday, and the Railers Jr Hockey Club and Vermont Lumberjacks at the January Showcase.

Nichols-Delay and the Revolution swept their two-game series with the North Carolina Golden Bears, and climbed back up into 2nd place in Mid-Atlantic standings. As for the '01 native of Canada, Nichols-Delay turned aside 37 of the 38 shots that were sent his way, en route to his second weekly honor of the season (Warrior Hockey Stars of the Week #12).

For the year, Nichols-Delay now owns a record of 7-1-0 to go along with a 1.16 GAA and .943 save percentage. Philadelphia has also won seven of their last eight dating back to the beginning of December, with their only loss coming at the hands of the top-ranked Boston Jr. Rangers in a tough 2-1 battle. This weekend, the Revolution will take on the Valley Jr. Warriors on Sunday, and the Seahawks Hockey Club on Monday.

The EHLP is pleased to announce that Nick Graziano (New Jersey Renegades), Ryan Gosselin (Philadelphia Revolution) and Jeremy Connor (New Jersey 87s) have been named the Warrior Hockey Stars of the Week.

Graziano and the Renegades picked up two huge points over the weekend as they were able to take down the 1st-place team in the Mid-Atlantic Conference, the Philadelphia Little Flyers. The '01 native of Pennsylvania scored two of the six goals for the Renegades during their 6-4 victory on Saturday afternoon. Graziano currently ranks 2nd on the Renegades in scoring, as he's tallied 30 points in 20 games. With 15 more regular season games, Graziano could easily surpass his previous season total of 46 points. The Renegades resume action this weekend as they are set to face-off with the New York Bridgemen on Friday and Sunday, with a matchup against the Revolution sandwiched in the middle on Saturday.

Gosselin and the Revolution picked up four points over the weekend, as they swept their home-and-home series with the Bridgemen. With the pair of wins, the Revolution improve to 7-3-0 in their last 10 games, and extend their win streak up to three. Gosselin was able to tally three points against the Bridgemen scoring a goal and dishing out two assists over the course of the weekend.

Connor and the 87’s continue to remain the hottest team in the EHLP with another win over the Little Flyers. With this win, the 87’s are now tied for 1st place in the Mid-Atlantic Conference with three games in hand over their rival.

The ’01 netminder stood strong in net for the 87’s facing 32 shots on Sunday, only allowing a single goal. After dropping the first game of the season to the Little Flyers, the 87’s have not lost a game to their biggest rival since, and currently hold a record of 4-1-0 with three more contests left in the regular season. 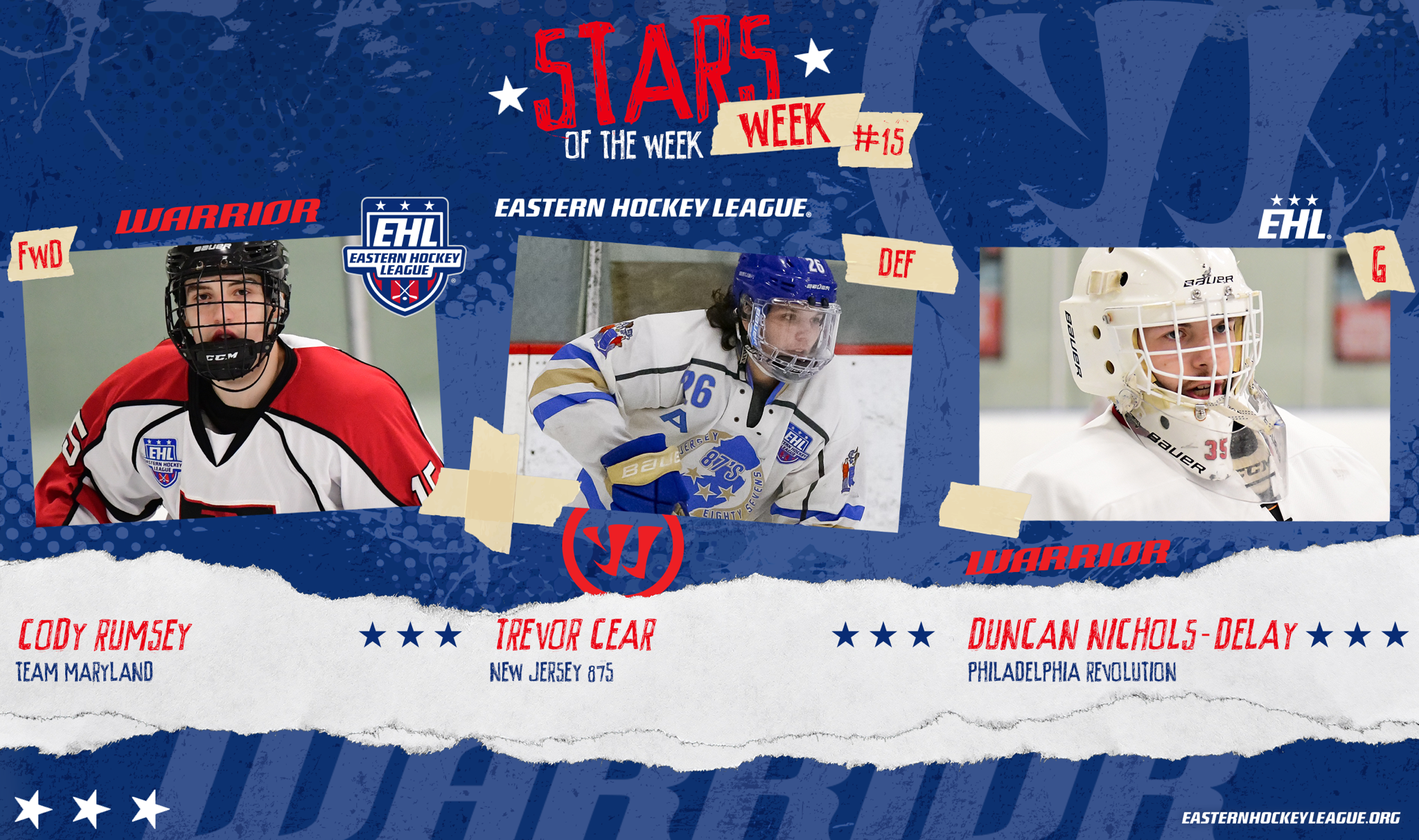 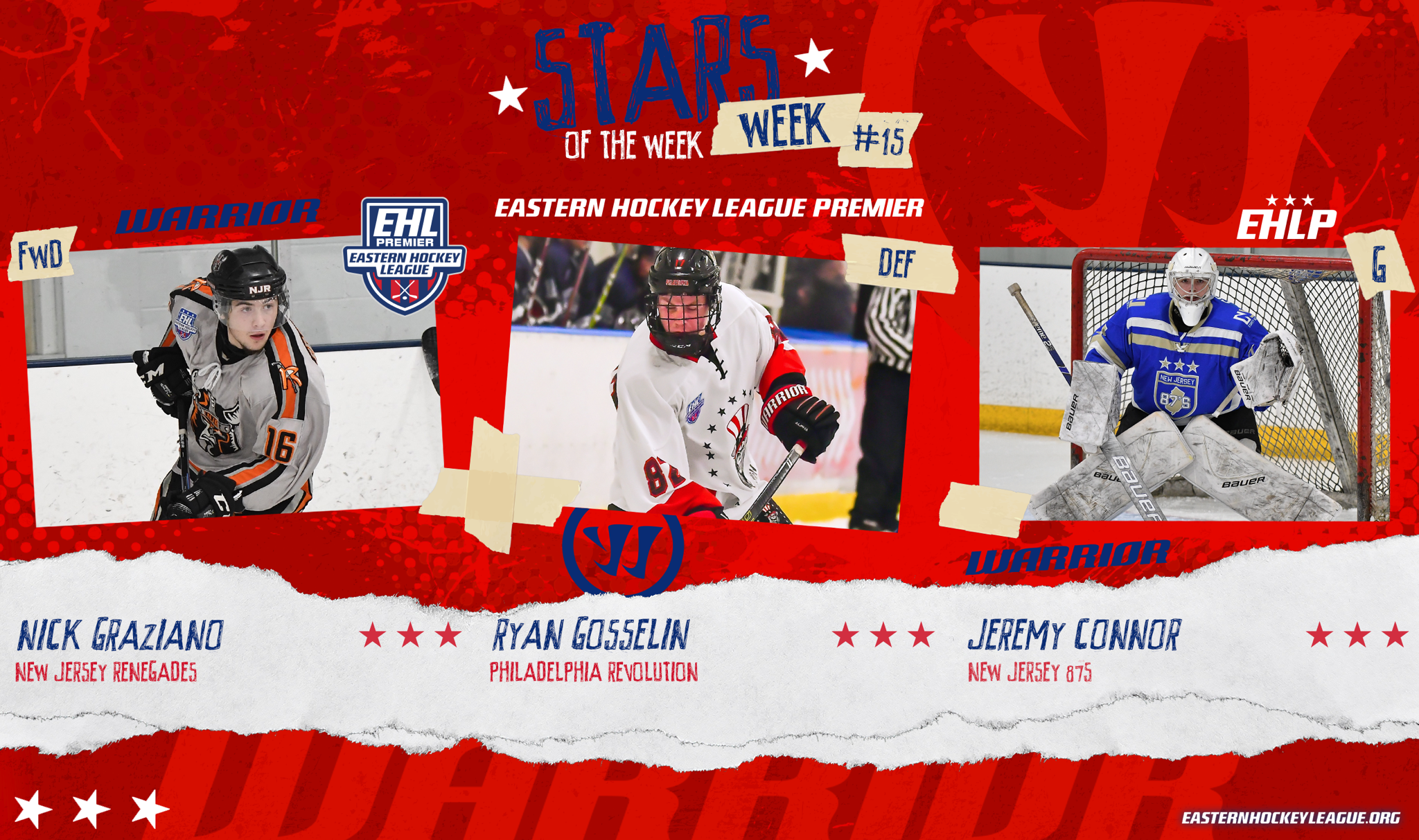