Warrior Hockey Stars of the Week #17

Below you'll find the 17th set of Warrior Hockey Stars of the Week from the past seven days in the EHL and EHLP.

Moroz and the Apple Core split their weekend series with the Philadelphia Revolution, who entered the week ranked #2 in the EHL Power Rankings. The '99 native of Ukraine leads the Apple Core with 37 points in 30 games, seven of which came this past weekend. Moroz started his point frenzy off in game #1 with the Revolution, as he was able to net one goal and one assist in a 5-2 loss on Saturday. It then became clear Moroz would be our Forward of the Week, after his performance on Sunday. Moroz was able to shine during game#2, scoring a hat-trick and tallying two additional assists. The Apple Core hope to build off of the momentum of their 7-6 shootout victory, when they take on the Connecticut RoughRiders in a home-and-home series this weekend.

Iida, Lane, and the Avalanche had a quiet but successful week, as they were able to take down the Seahawks Hockey Club on Thursday. With the win, the Avalanche now trail the Seahawks by just five points in the New England Conference standings, and on four games in hand on the current #3-seed.

Both Iida and Lane were major factors for the Avalanche in their 2-1 victory. Iida, the Tufts University commit, was able to assist on both goals in the contest, and meanwhile between the pipes, Lane was faced with 28 shots and only allowed a single goal. With the win, Lane improved his record up to 9-5-2 for the year, to go along with a 2.16 GAA and .931 save percentage. Iida, Lane, and the Avalanche have quietly allowed the fewest number of goals against in the EHL this season.

As the race for playoffs continues, the Avalanche will play 9 of their final 13 games on home ice at the Ice Den Arena. The important stretch starts this weekend with matchups against the Connecticut Chiefs and Railers Jr Hockey Club.

The EHLP is pleased to announce that Ryan Bailey (Boston Jr. Rangers), Sebastian Rominiecki (Philadelphia Little Flyers) and Alex Herman (Vermont Lumberjacks) have been named the Warrior Hockey Stars of the Week.

Bailey and Rangers went 3-0-0 this past weekend with wins over the Railers Jr. Hockey Club, Lumberjacks, and New Jersey Renegades, and they climbed up into 3rd place in the New England Conference. It's also worth noting that the Rangers have played the fewest number of games in their conference at 29.

The 2000-born native of Alaska led the way on offense for the Rangers, as he was able to rack up a whopping eight points over the course of the three games. Bailey started off the weekend against the Railers by scoring one goal and tallying one assist, before turning in identical performances against the Lumberjacks and Renegades where he was able to score a goal and notch a pair of assists in each matchup. With a total of 59 points in 27 games, Bailey sits in 5th place for total points in the league, and has proven to be a key part of the 2019-20 Rangers' offense.

Rominiecki and the Little Flyers went 2-1-0 this past weekend, snapping their four-game losing streak, and picking up four points in the Mid-Atlantic Conference standings. Philadelphia now sits just two points behind the New Jersey 87s for the top spot.

As for the 6'1" defenseman, Rominiecki has officially surpassed his point total of 11 from last year, as he now has 16 points in 31 total games this year. During game #1 of the weekend, Rominiecki netted a goal, before assisting on three more tallies in game #3. As the Little Flyers get back in the win column, they hope to keep things going in the right direction with matchups against the 87's and the New York Bridgemen on the docket for this upcoming weekend.

Wrapping things up between the pipes is the '01 native of New Rochelle, NY, Alex Herman. Herman and the Lumberjacks posted a 1-1-1 record in their three games over the weekend, with Herman picking up the victory on Saturday.

Herman set the tone for his team, while stopping 40 of the 42 shots that the 87's sent his way. Acting as an anchor in goal, Herman was able to help lead Vermont to a 4-2 victory that snapped New Jersey's winning streak at 11 games. With the victory Herman improved his record up to 6-3-0 for the year. The Lumberjacks will likely lean on Herman again this weekend, with two big games on the schedule against the Rangers. 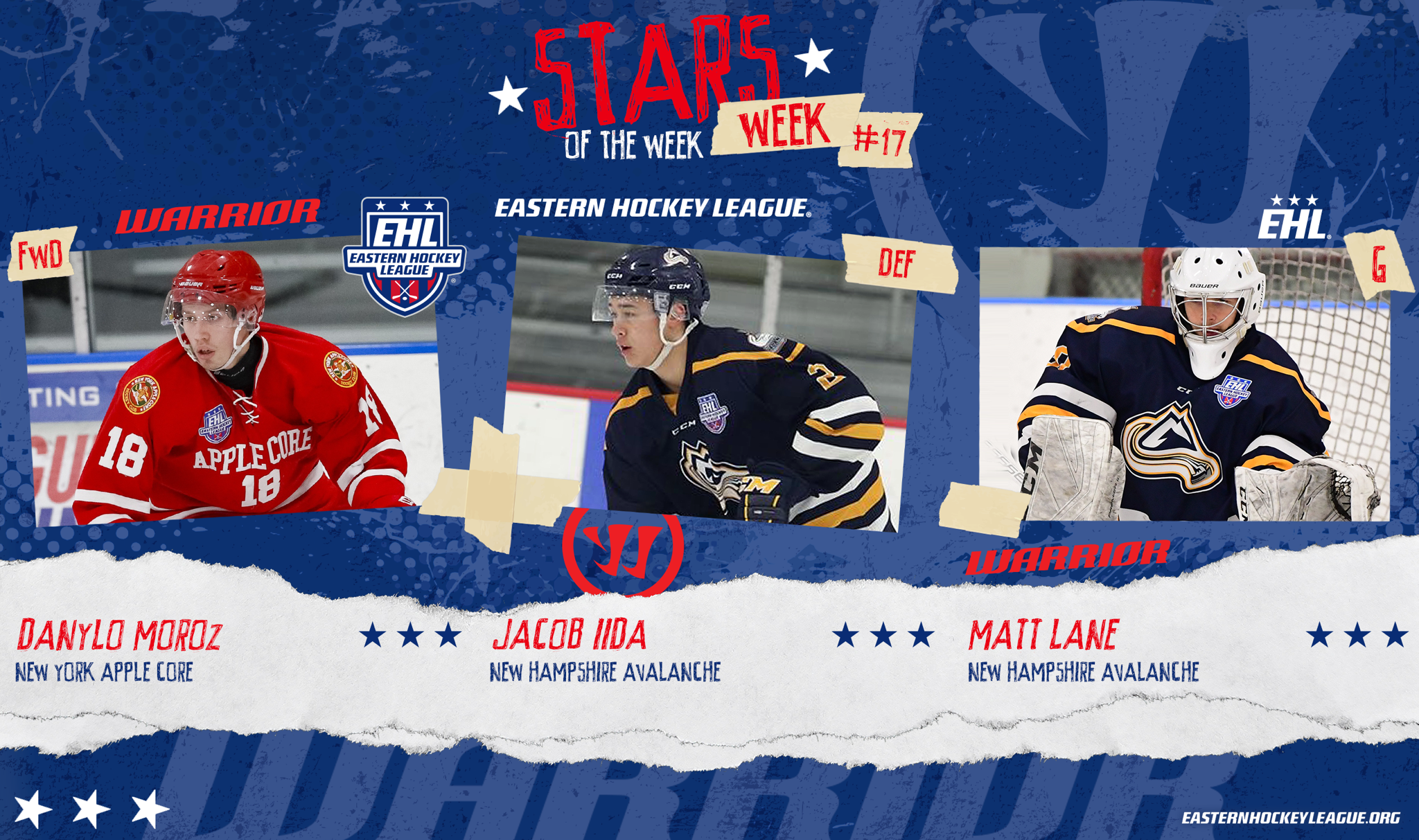 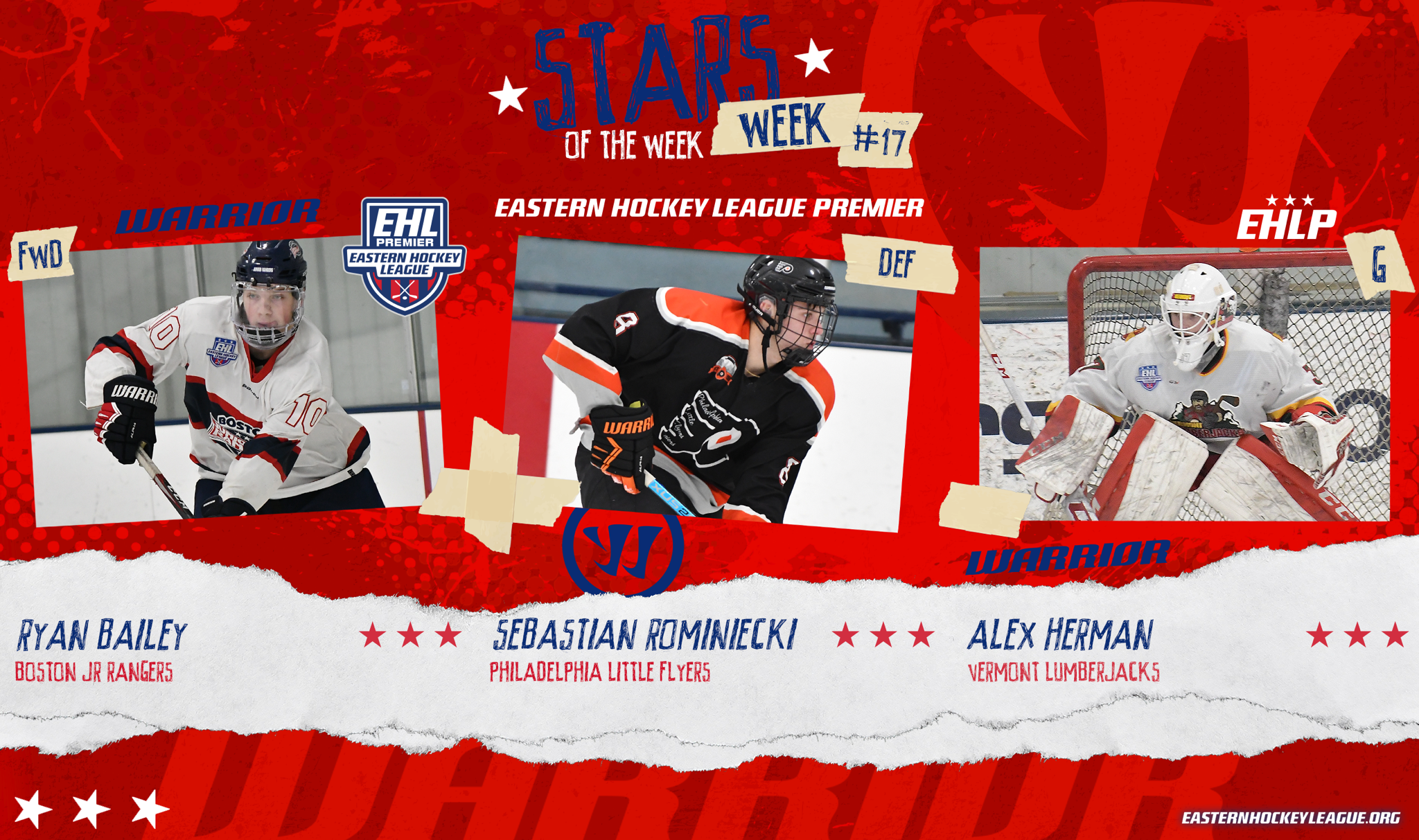