Warrior Hockey Stars of the Week #18

Below you'll find the 18th set of Warrior Hockey Stars of the Week from the past seven days in the EHL and EHLP.

The EHL is pleased to announce that Tim Cronin (New Hampshire Avalanche), Cam Roberts (Vermont Lumberjacks), and Tobias Falkenstedt (Walpole Express) have been named the Warrior Hockey Stars of the Week.

Cronin and the Avalanche had an explosive weekend, scoring a total of 17 goals over the course of two games against the Connecticut Chiefs and the Railers Jr Hockey Club. The ’99 veteran forward started his point frenzy on Saturday against the Chiefs, scoring two goals and tallying an assist. Things didn’t stop there for the native of Derry, NH,  as he was able to net a single goal and assist on three others during the 8-1 victory over the Railers on Sunday. The SUNY Brockport commit leads the Avalanche in points with 43 points in 31 total games. Action resumes for the Avalanche tomorrow, as they will host the New England Wolves before traveling to Exeter, NH on Friday to take on the Seacoast Spartans.

Cam Roberts and the Lumberjacks split their pair of games this past weekend against the 1st-place Boston Jr. Rangers, bringing their team point total up to 57, as they now sit just two points back of their rival.

Falkenstedt and the Express came out victorious during their one game of the week, as they were able to serve the Rangers their first loss since November 11th. During the 4-3 overtime victory for the Express, the Swedish netminder was faced with a whopping 44 shots, fending away a total of 41. Falkenstedt’s season record now improves to 15-10-1, and is tied for second place in the league for total wins. With the newest set of EHL Power Rankings released this morning, Walpole cracked into the top-five for the first time this year. It's also worth noting, that the Express have knocked off three of the four other teams inside the top-five. Action resumes for the Express on Wednesday as they travel to take on the Railers in Worcester, MA.

The EHLP is pleased to announce that Joe Minio (New Jersey 87s), Tyler Anastasi (Railers Jr. Hockey Club) and Hogan Nelson (Walpole Express) have been named the Warrior Hockey Stars of the Week.

Minio and the 87’s went 1-0-1 this past weekend, falling to the Philadelphia Little Flyers in overtime and finding victory against the New Jersey Renegades. During the tight-knit battle with the Little Flyers, the '01 native of Staten Island, NY, played a role in all four goals scored by his team, finding the back of the net twice and assisting on the two others. The following day Minio had an identical performance against the Renegades, tallying four more points. With this eight-point weekend, Minio now leads the 87’s in scoring with 36 points in 29 total games. The 87’s also slid back into 1st place in the Mid-Atlantic Conference with 49 points to date, which puts them one point ahead of the rival Little Flyers.

Anastasi and the Railers were able to split their home-and-home series with the New Hampshire Avalanche, with each team finding victory on the road. The ’02 defenseman was a large factor in the Railers' victory on Sunday, as he was able to net two goals and tally an assist. In 32 games played the native of North Andover, MA, has 34 points and leads his team in scoring, despite being a defenseman. As we continue down the road towards the EHLP Playoffs, Anastasi will a player to keep an eye on for this season's Defenseman of the Year honor. The Railers have eight games left in regular season, and currently sit in 4th place in the tight New England Conference, just four points behind the 1st-place Boston Jr. Rangers.

The Express split their home-and-home with the Connecticut Chiefs, as Nelson stood strong between the pipes in the victory on Sunday. It is no surprise that Nelson has been an important asset to this year's Express team, with this being his 3rd league honor of the season (Warrior Hockey Stars of the Week #13 -- December Star of the Month).

During the 7-1 victory the Smithfield, RI netminder saw a total of 35 shots, notching a save percentage of .972. Nelson’s record for the season now stands at 7-8-1. The Express resume action on Friday, with their only game of the weekend, as they New Hampshire Avalanche at 7:40pm. 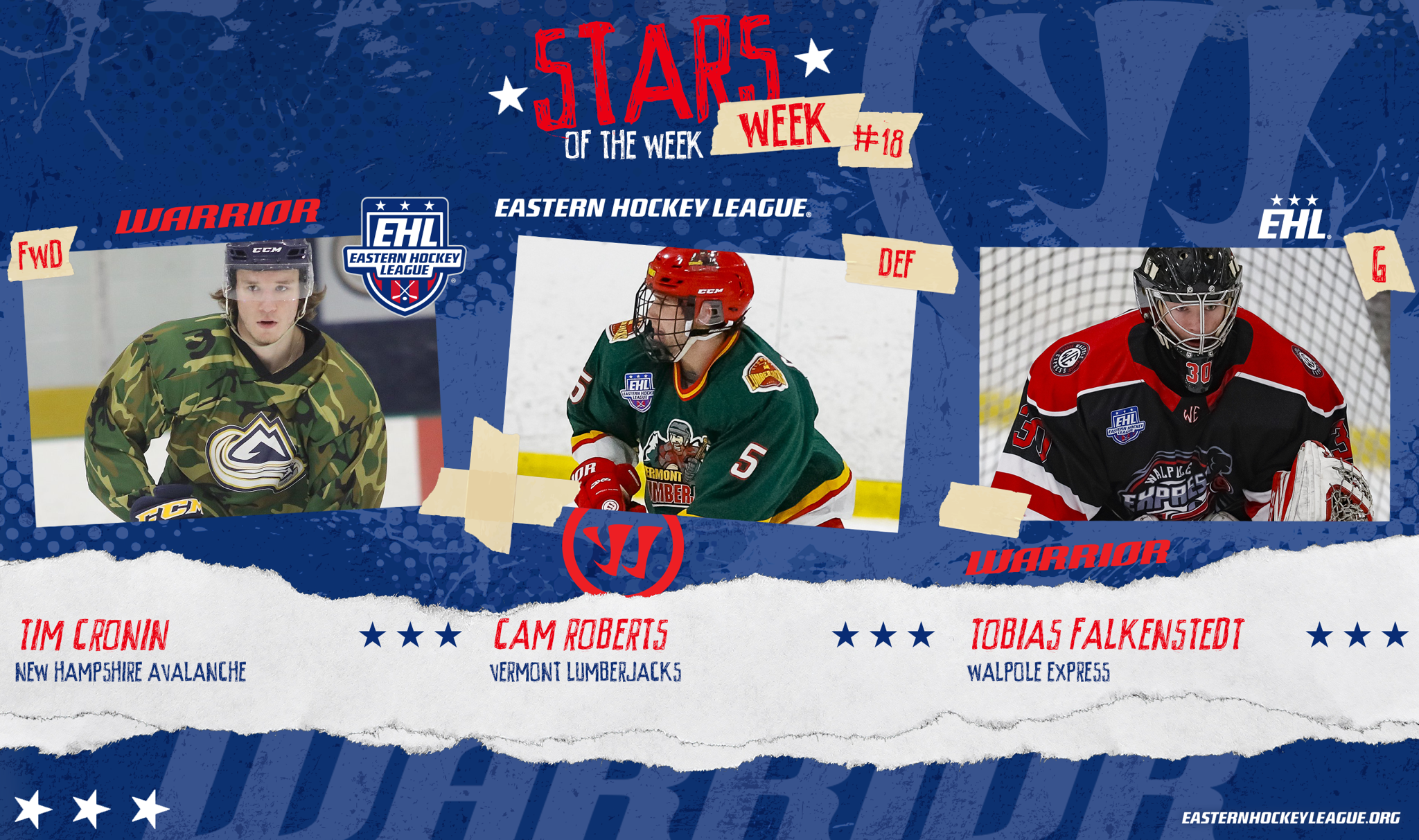 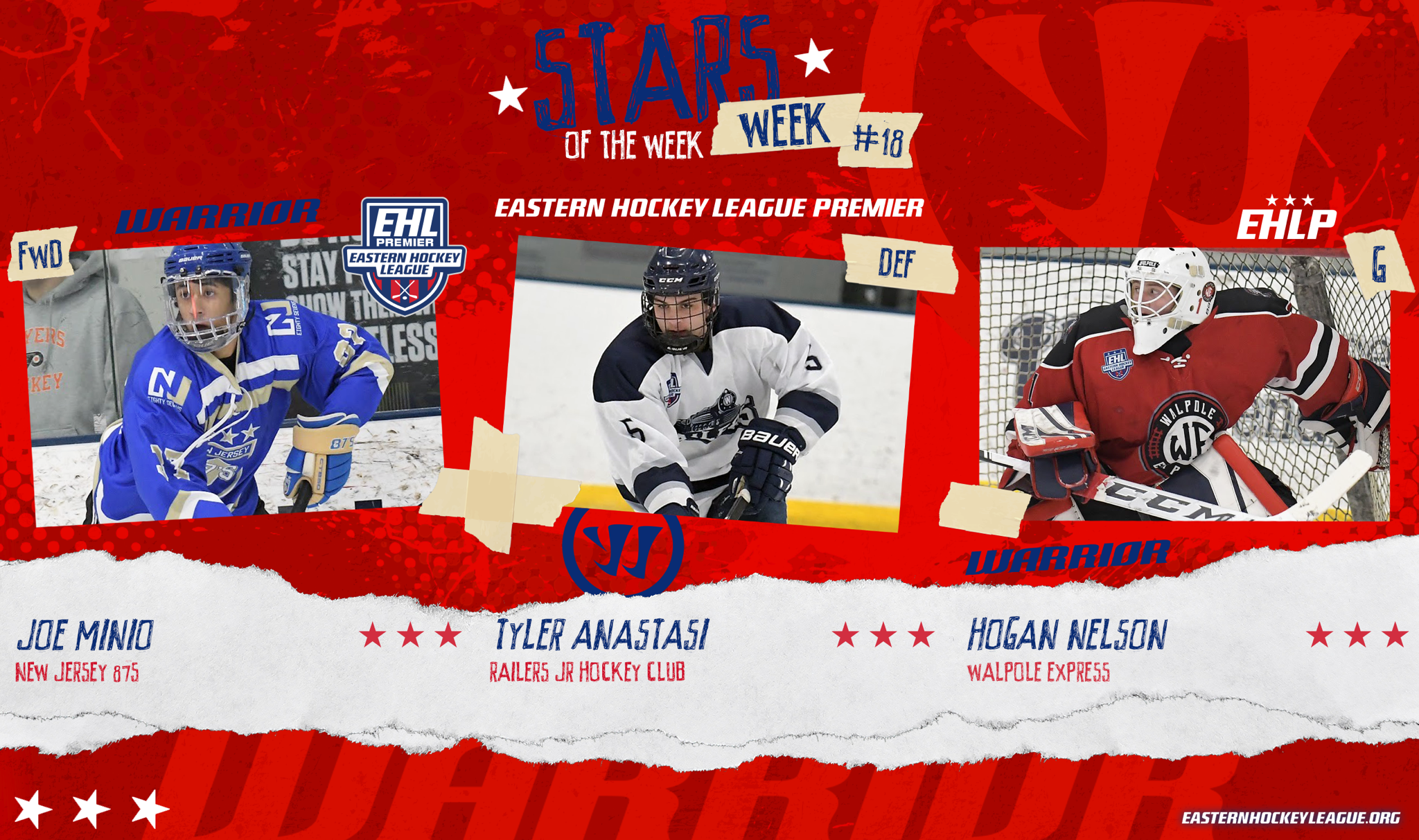