Warrior Hockey Stars of the Week #21

Below you'll find the 21st set of Warrior Hockey Stars of the Week from the past seven days in the EHL and EHLP.

With a win over the Connecticut RoughRiders this past Wednesday, followed by a pair of victories over the North Carolina Golden Bears on Saturday and Sunday, the 87's officially clinched the top seed in the Mid-Atlantic Conference.

Lane was the offensive catalyst for the 87’s, as he was able to tally a total of nine points throughout the three contests. The ’99 native of South River, NJ started things off against the RoughRiders by scoring a goal and dishing out three assists. Lane continued to excel against the Golden Bears, as he was able to add five more assists to his season totals. The 87's have three games left in the regular season, which includes matchups against the Philadelphia Jr. Flyers, RoughRiders, and Philadelphia Revolution.

The Express continue to chug along and prove they are a team not to be slept on, entering the postseason. This past week alone, Walpole defeated the Seahawks Hockey Club, Seacoast Spartans and New Hampshire Avalanche, picking up an enormous six points in the New England Conference standings. Both Mell and Falkenstedt were key players during the trio of victories for the Express.

With three huge wins between the pipes, there was no denying Falkenstedt another Goalie of the Week honor. Throughout the week, the 2000-born Swedish netminder was faced with 107 shots, only allowing six total goals, bringing his season record to 18-10-3. As Falkenstedt continues thrive down the stretch, his name is definitely one to keep in mind, as Goaltender of the Year conversation begins.

Lizotte and the Railers picked up six out of a possible six points this past week, earning victories over the Connecticut Chiefs, Vermont Lumberjacks, and Walpole Express. The 2000-born native of Franklin, MA had his best week of the season, as he was able to rack up a total of nine points throughout the three games. Lizotte started his point frenzy off against the Chiefs on Saturday, where he notched a goal and assisted on three others, before scoring two goals and tallying three assists against Vermont. Despite being held scoreless today, the Railers currently sit in a tie for 2nd place in the New England Conference.

Lizotte and the Railers have a big game on the schedule this weekend, as they host the Boston Jr. Rangers on Saturday night at 7:00pm.

Benedict and the Little Flyers continue to be the hottest team in the
Mid-Atlantic Conference, as they extended their winning streak out to 10 this past weekend, with victories over the New Jersey Renegades and Philadelphia Revolution.

The 2000-born defenseman tallied five total points, including an assist against the Renegades, and two goals and two assists against the Revolution. Benedict's 2nd tally against the Revolution came in overtime on Monday afternoon. With just two games remaining, the Little Flyers will look to stay hot and in contention for the top seed in their conference.

Gates and the Wolves have not slowed down, as they took down the conference-rival New Hampshire Avalanche in a shootout on Sunday. With the win, the Wolves are now riding a 13-game streak, which puts them three behind all-time record set by the 2017-18 Boston Jr. Rangers.

The 2000-born netminder continues to be a vital player in the Wolves lineup, as he was faced with a whopping 56 shots during the 5-4 shootout victory on Sunday. Despite being outshot 56-23 the Wolves were able to escape the tight contest with the win, proving that Gates was the true #1 star of the hockey game. The Wolves have four regular season games remaining, three of which put them back up against the Avalanche. 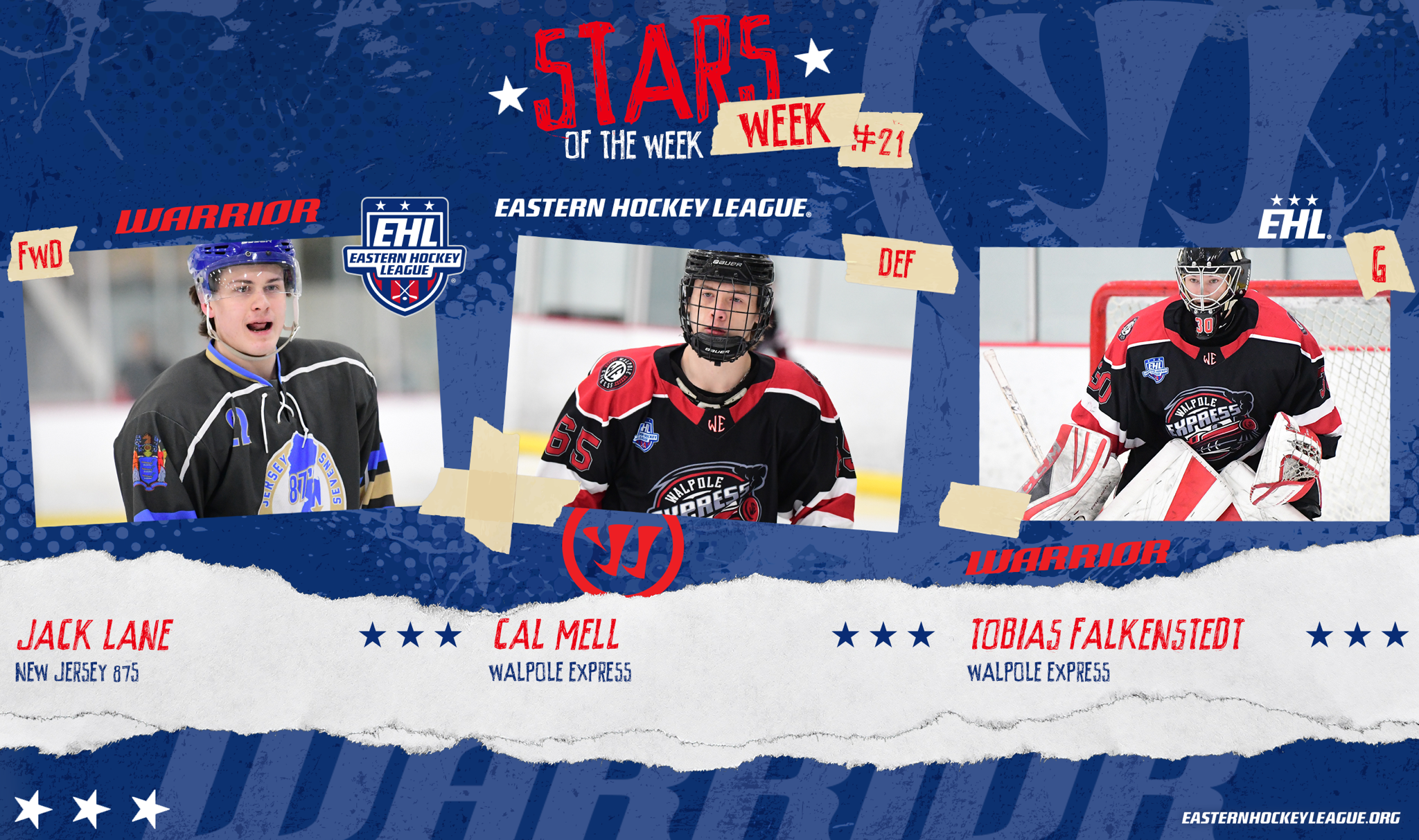 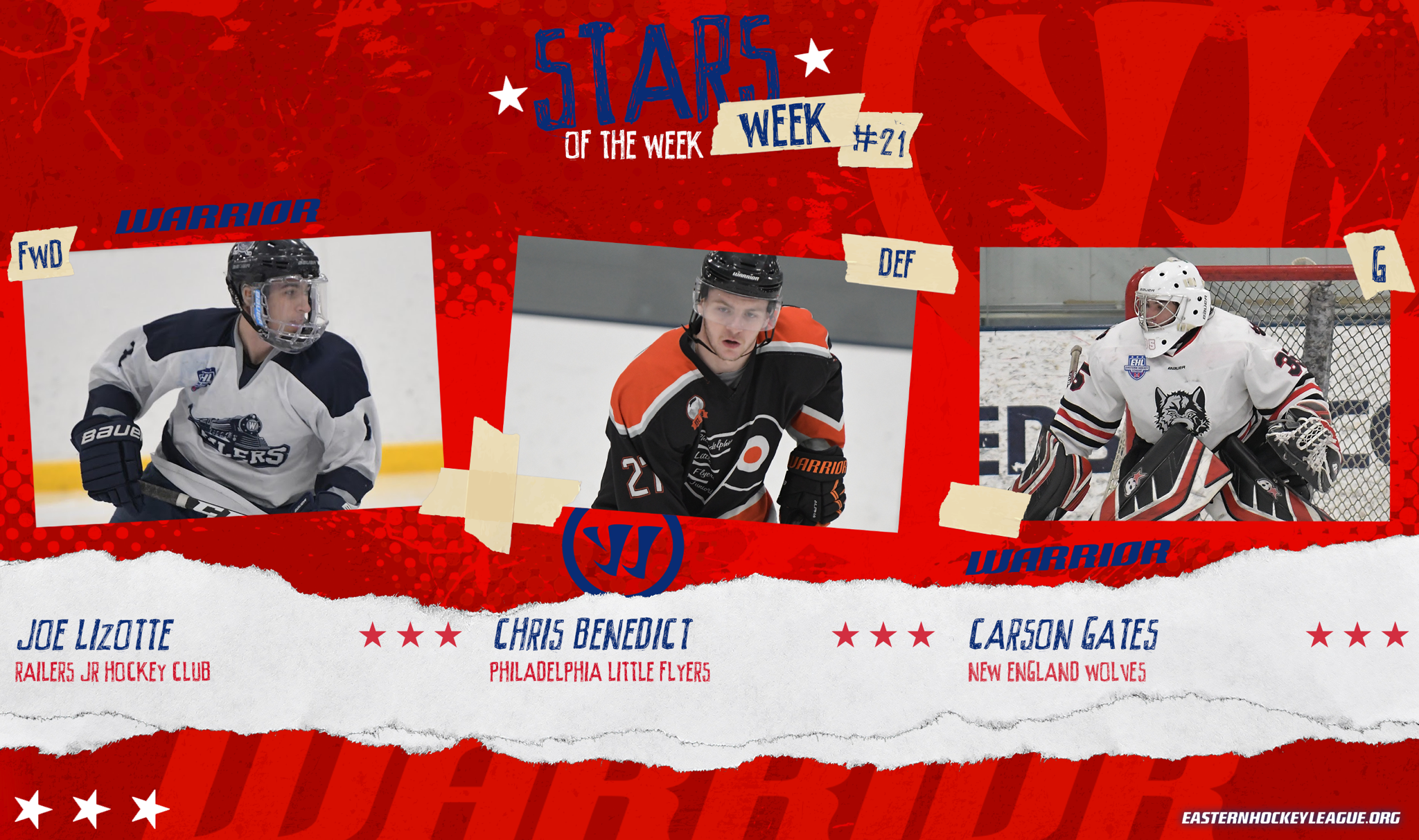