Warrior Hockey Stars of the Week #22

Below you'll find the 22nd set of Warrior Hockey Stars of the Week from the past seven days in the EHL and EHLP.

The EHL is pleased to announce that John Pearson (Philadelphia Revolution), Tim Lazouski (New Jersey 87s), and Karlis Reinis Riba (Boston Jr. Rangers) have been named the Warrior Hockey Stars of the Week.

Pearson and the Revolution have essentially clinched the #2 seed in the Mid-Atlantic Conference with a victory over the Philadelphia Jr. Flyers last Wednesday, and then a two-game sweep of Philadelphia Little Flyers on Saturday and Sunday.

The 2000-born EHL All-Star forward tallied a total of five points over the course of three games. During the contest with the Jr. Flyers and and the first game with the Little Flyers, Pearson was able notch a single assist in each contest. Pearson then secured the Forward of the Week honor, when he notched all three goals for the Revolution against the Little Flyers on Sunday. Following their First Round bye, the Revolution face the highest remaining seed that advances to the Second Round. The potential opponents include either the Little Flyers, Team Maryland, and the Connecticut RoughRiders.

Lazouski and the 87’s swept the weekend with victories over the Jr Flyers and RoughRiders. Although they have already clinched the top seed in their conference, it's still to be determined who New Jersey will face with a trip to Providence, RI on the line.

The 2000-born native of Belarus notched three assists throughout the two contests. Lazouski now has a season total of 29 points in 42 games, and has officially surpassed 20 total points he tallied through all of last year. The 87’s will wrap-up the regular season on Friday, as they host the Revolution at 12:30pm.

Riba and the Rangers extended their wining streak out to six, with victories over the Connecticut Chiefs and New Hampshire Avalanche. The ’01 netminder remains perfect for the season, as his record now stands at 8-0-0. Throughout the course of the two games, Riba picked up a shutout against the Chiefs where he was faced with a total of 27 shots. The native of Latvia was really put to the test against the Avalanche, where he was faced with 44 shots in a game that eventually ended in a shootout. Similar to the 87’s, the Rangers will rest up with a First Round bye, as they await to learn their opponent for the Second Round.

Wagenmann and the Revolution split their weekend series, falling to the rival Philadelphia Little Flyers on Saturday, and then defeating the New York Bridgemen on Sunday.

Despite coming up short against the Little Flyers, the 2000-born native of Holland, PA, was able to tally two of three possible points, netting a goal and assisting on another. Wagenmann delivered his noteworthy performance on Sunday, recording an unbelievable nine points throughout 60 minutes of play. Not only was he able to score a hat-trick, but he was also able to assist on six other goals for the Revolution. With just two more games left in the regular season, the Revolution are locked into the #3 seed, and are patiently awaiting to see who they will face with a trip to Providence, RI on the line.

Strauss, Ward-Brown, and the Avalanche picked up four huge points in the standings this past week, earning victories over the 1st-place Boston Jr. Rangers and defending champion New England Wolves Strauss, the ’02 defenseman from Canada, continues to prove he is a vital member of the Avalanche on the back end, as he tallied five points throughout the two games. The native of Alberta assisted on one goal against the Rangers, and had a huge four-point afternoon against the Wolves. During the contest with the Wolves, Strauss netted and even two goals and two assists. Strauss leads his team in defensive scoring, and he will be leaned on heavily down the stretch and into the playoffs.

Ward-Brown stood strong between the pipes for both Avalanche victories, improving his season record up to 9-2-0. Throughout the two contests the 2000-born netminder was faced with a total of 59 shots, allowing just four goals. The noteworthy performances by Ward-Brown and Strauss helped snap the Wolves winning streak at 13 games, and also hand the Rangers just their 6th regulation loss of the season.

New Hampshire is currently in 2nd place in the New England Conference, with two more games remaining this week against the Wolves. The Avalanche will have to win at least one, if they want to secure their position and earn a First Round bye in the playoffs. 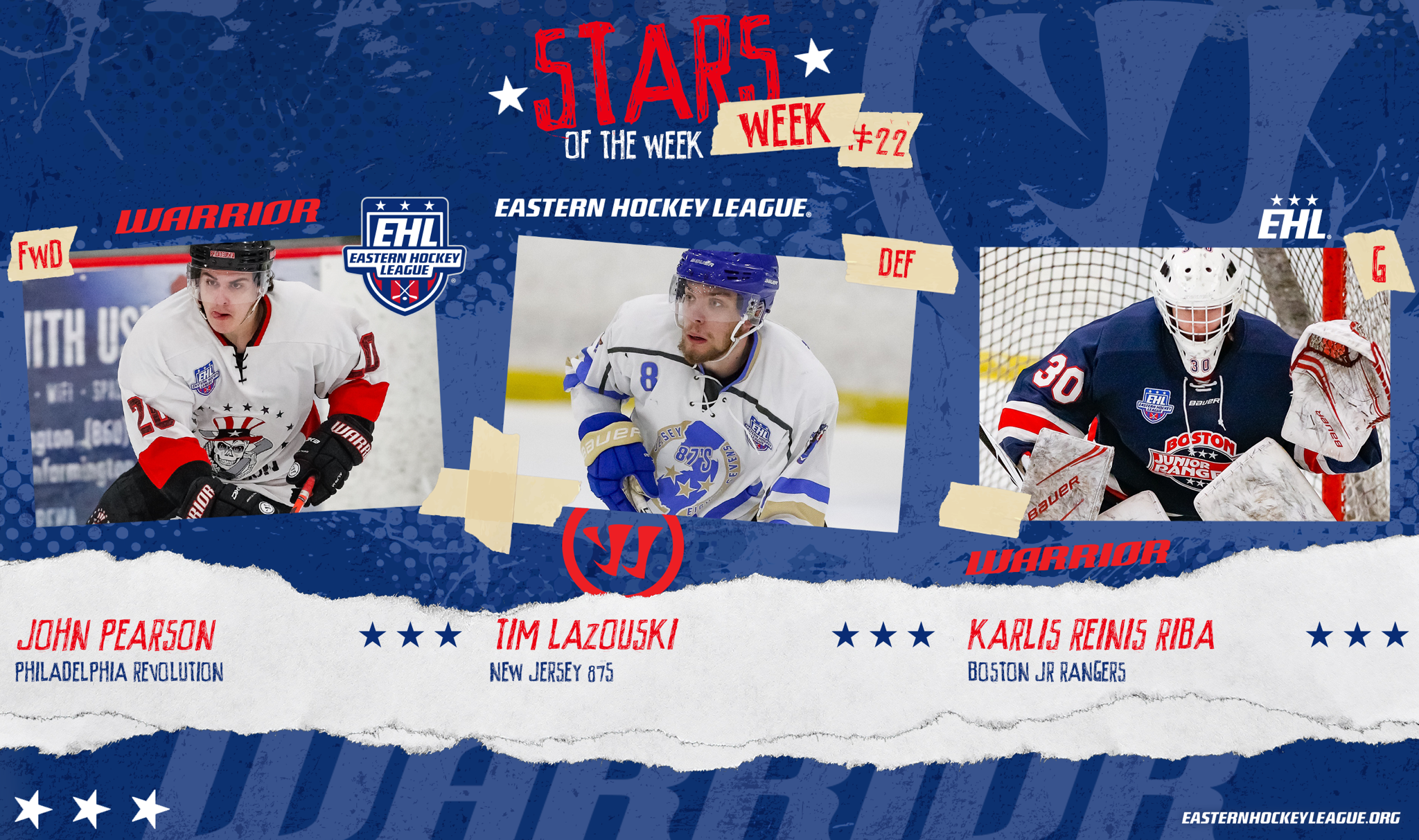 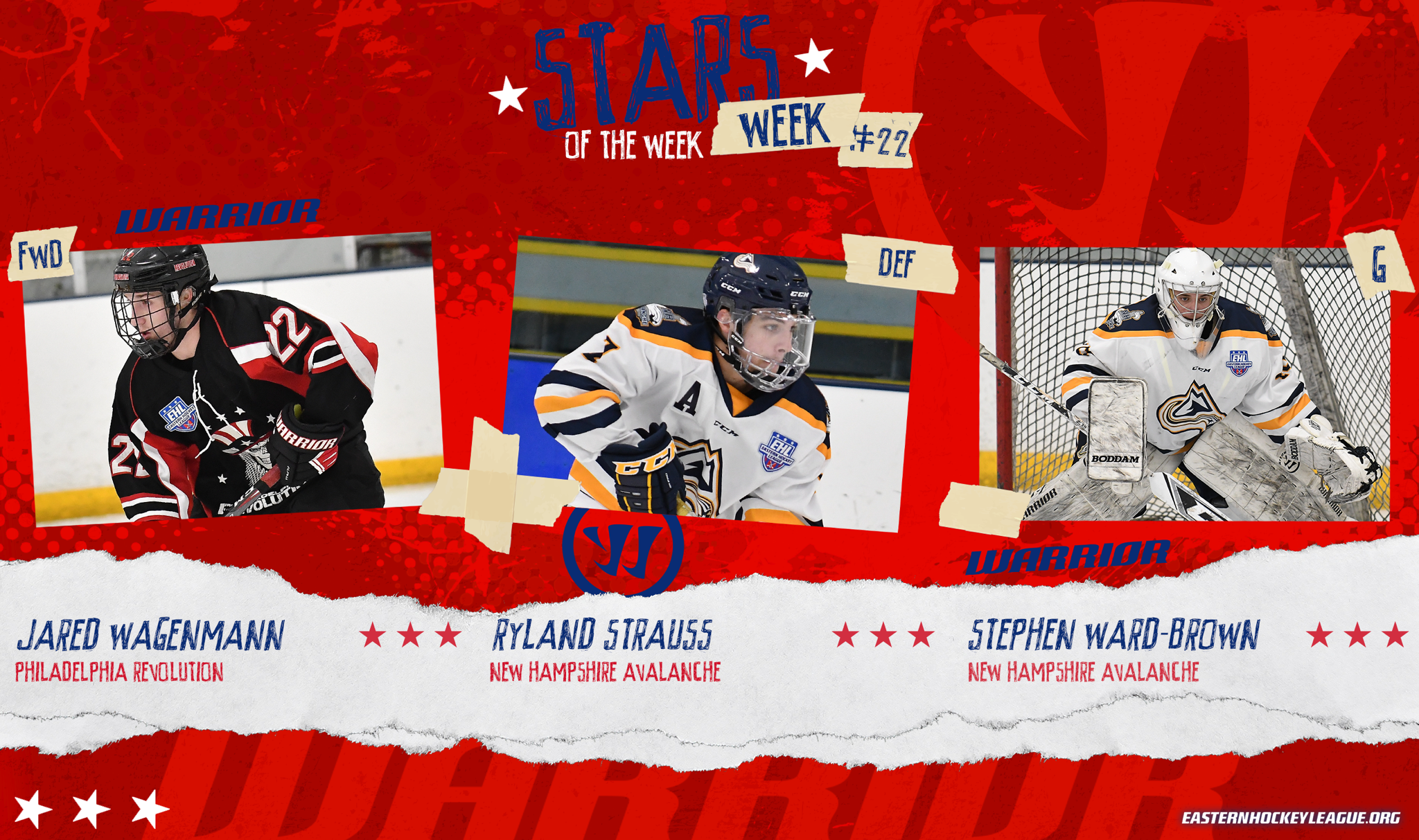