Warrior Hockey Stars of the Week #23

Below you'll find the 23rd set of Warrior Hockey Stars of the Week from the past seven days in the EHL and EHLP.

The EHL is pleased to announce that Andrew Keith (Boston Jr. Rangers), CJ Kline (Seahawks Hockey Club), and Jon Kopack (New Jersey 87s) have been named the Warrior Hockey Stars of the Week.

Keith and the Rangers wrapped-up the regular season with one final game against the Walpole Express that resulted in a 4-3 win in overtime. The SUNY Fredonia commit was able to net two goals in the first period for the Rangers, and then completed the hat-trick with the lone goal scored in the 2nd period. Keith ended the regular season with 39 points in 46 games, surpassing his previous record of 35 points from last year. As the playoffs begin, the Rangers are still unsure of who they will play in the Second Round, but are prepared to take on whoever they draw.

CJ Kline and the Seahawks are officially locked into the 4th seed in the New England Conference with a sweep over the Seacoast Spartans. The '99 candidate for Defenseman of the Year and MSOE commit, tallied six points throughout the two contests. Kline was able to tally a goal of each of the games and notched four total assists, three of which came in the first matchup. By earning the 4th seed the Seahawks skip over the Play-In Round and will face-off with either the Express, East Coast Wizards, or New England Wolves in the First Round.

Kopack and the 87’s officially ended their regular season with a 7-1 victory over the Philadelphia Revolution, going 3-1-0 against their Mid-Atlantic Conference rival this year. The 2000-born netminder from Ramsey, NJ was faced with a total of 27 shots throughout the 60 minutes, only allowing a single goal. Kopack finishes off the regular season with an overall record of 10-2-0 in 12 total starts. Now, Kopack and the 87's will await to find out their opponent in the Second Round of the EHL Playoffs.

Bailey and the Rangers have officially been crowned the EHLP Regular Season Champions with a weekend sweep of the Valley Jr. Warriors. The Rangers now become the first organization in league history to win both the EHL and EHLP Regular Season Champions in the same season. Bailey also had a record-setting weekend as he was able to reach the 100-point milestone with 11 points throughout the two games. The native of Alaska began his point frenzy on Saturday when he was able to net a pair of goals and assist on four other tallies. Things didn’t slow down there, as he was then able to net yet another pair of goals and notch three more assists during Sunday’s contest. With a First Round bye, the Rangers will await to find out their opponent for the Second Round, with a trip to Providence, RI on the line.

Carter, Connor, and the 87’s have officially clinched the 1st seed in the Mid-Atlantic Conference with a weekend sweep of the Philadelphia Revolution. Carter was able to shine on the backend during the first game, notching three assists in a 9-3 victory. The 2000-born defenseman ends the regular season with 20 points in 41 games, and is a strong candidate to earn a spot on an All-Conference team this season.

Connor proved once again to be one of the top goalies in the EHLP, with his dominating performance during Sunday's 6-1 victory. In total, the '01 netminder turned aside 40 of the 41 shots he faced, allowing just a single goal. For the regular season, Connor owned a 15-7-0 record in 22 total starts. Connor and the 87's are now set to face-off with the New Jersey Renegades, and if they can advance, New Jersey will earn its 1st-ever appearance Frozen Finals. 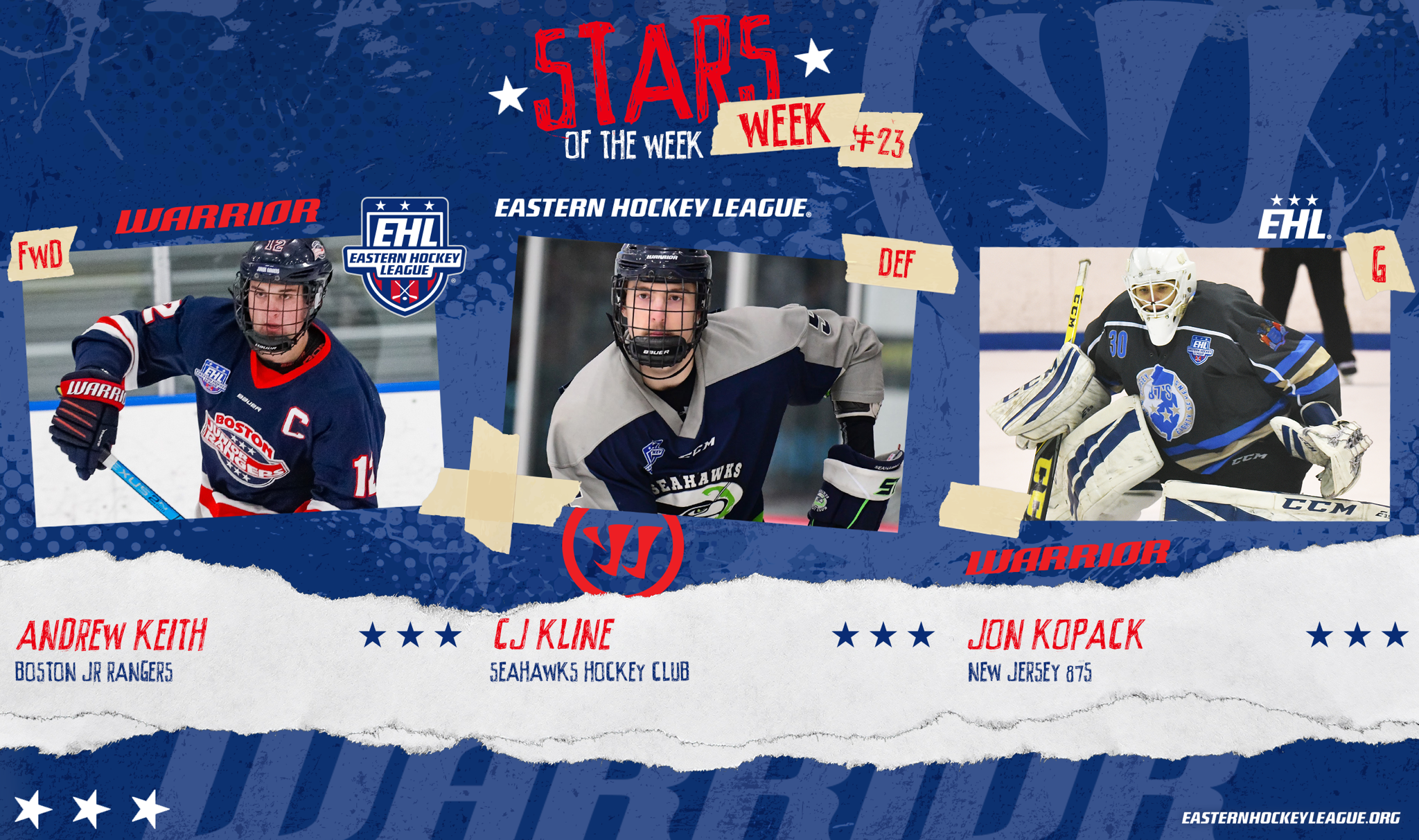 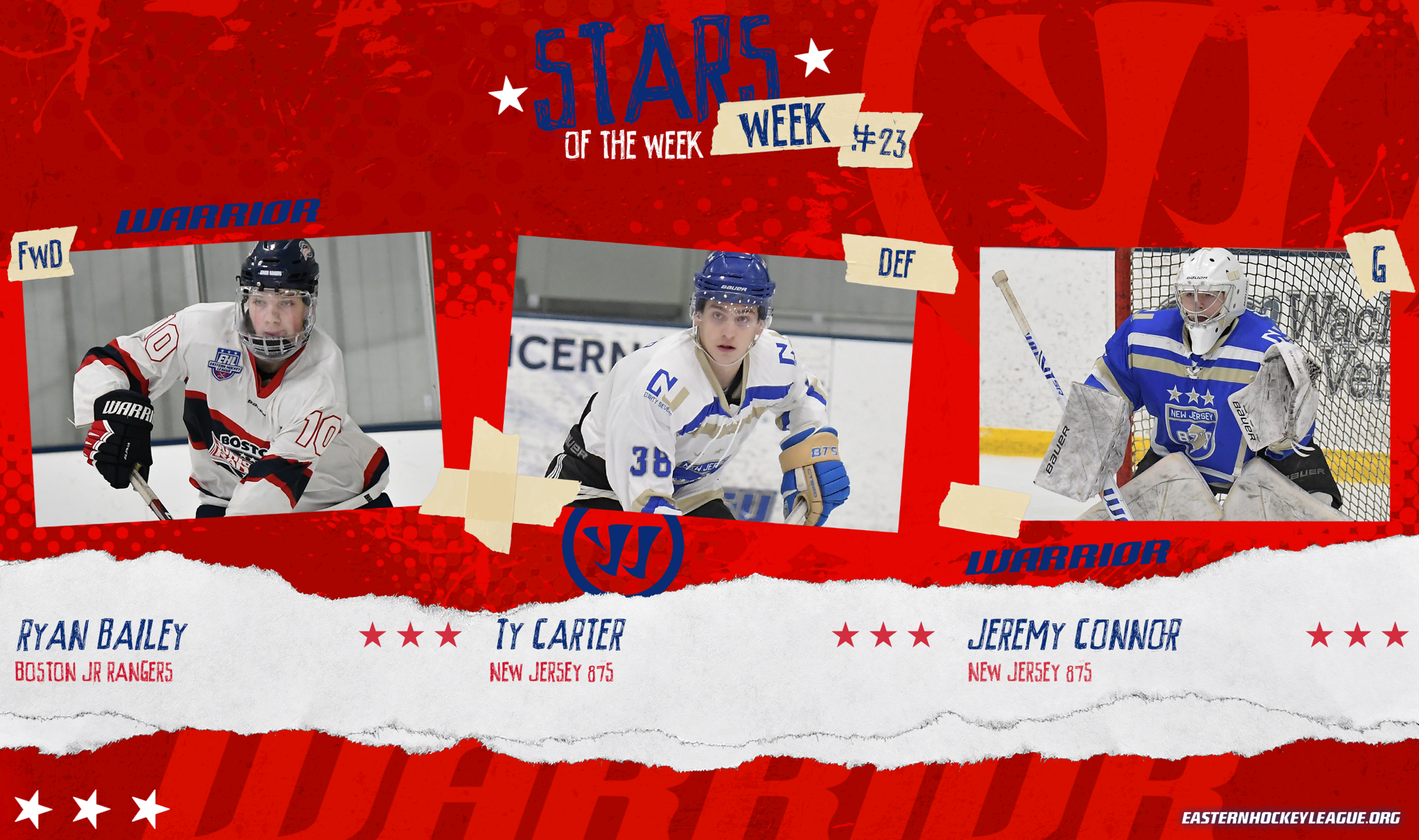