Rangers and 87's Named Organizations of the Year

Top Program Recognized in Each Conference

BOSTON, MA -- To wrap-up the end of the season awards in the Eastern Hockey League (EHL) and the Eastern Hockey League Premier (EHLP), we would like to recognize the top-ranked team from each conference. While the Boston Jr. Rangers and the New Jersey 87's didn't have a chance to win a playoff championship, they each are being recognized for what they accomplished in the regular season. Each program proved to be a top contender in both the EHL and the EHLP, and look no further than the Rangers controlling the #1 seed at both levels of the New England Conference, and the 87's following suit at both levels of the Mid-Atlantic Conference.

"The conclusion of the 2019-20 season is something that we've never seen before in the EHL, and quite frankly, no sports league has ever seen before," said Neil Ravin, the league's Director of Communications. "In the days following the cancellation of the remaining playoff games, including the Frozen Finals, I felt similar disappointment to that of many players, coaches, and owners throughout the league. While we will never crown a champion for the 2019-20 season, these two programs need to be recognized for what they accomplished throughout the year. Never before has a single program owned the top playoff seed in their conference at both the EHL and the EHLP levels, but this year, these two teams did just that."

As far as the Regular Season Championships at both levels, each of those was taken home by the Rangers, but even they will tell you that it came down to the wire with the 87's.

"To be honored as the Organization of the Year in the New England Conference is a nice accomplishment for our program," said Rangers head coach and general manager Rich DeCaprio. "While we will forever be asking ourselves the 'what if' question, we are also still very proud of what we accomplished this past year."

In the EHL, the Rangers began the season with a record of 1-2-0 in their first three games, and only scored four goals combined in those contests. From there however, the Rangers led the EHL from wire-to-wire, going 38-3-2 in their next 43 games, including a 15-game winning streak. With 208 goals for and 104 goals against, the Rangers featured a balanced scoring attack, while also holding their opponents in check throughout the year. Leading the way on each end of the spectrum were Brent Rickett and Billy Girard. With 66 points in 45 total games, Rickett was the leading scorer for the Rangers during the 2019-20 season, and was recently named the Forward of the Year in the EHL. As for Girard, in his 2nd year with the Rangers, the talented netminder flourished while setting a new league record with 28 wins in the regular season. Rickett and Girard account for 2 of the 12 NCAA Commitments so far for the Rangers program.

As for the Rangers' EHLP team, the numbers were pretty similar, starting with the overall record of 34-6-2 during the regular season. With 260 goals for and the 105 goals against, the balance was truly consistent throughout the program. Johnny Malandruccolo gave the Rangers their 2nd Forward of the Year honor to go along with Rickett, but the '01 scorer was also named MVP of the EHLP, after putting up an impressive 112 points (league record 60 goals) in the regular season. Malandruccolo wasn't the only forward that shined however, as Ryan Bailey also reached the 100-point mark with 41 goals and 59 assists.

Overall the Rangers program took home an MVP award, both Forward of the Year honors, a Co-Goaltender of the Year award, and six different players claimed spots on either All-League or All-Conference teams.

Congratulations to this year's Organization of the Year in the New England Conference. 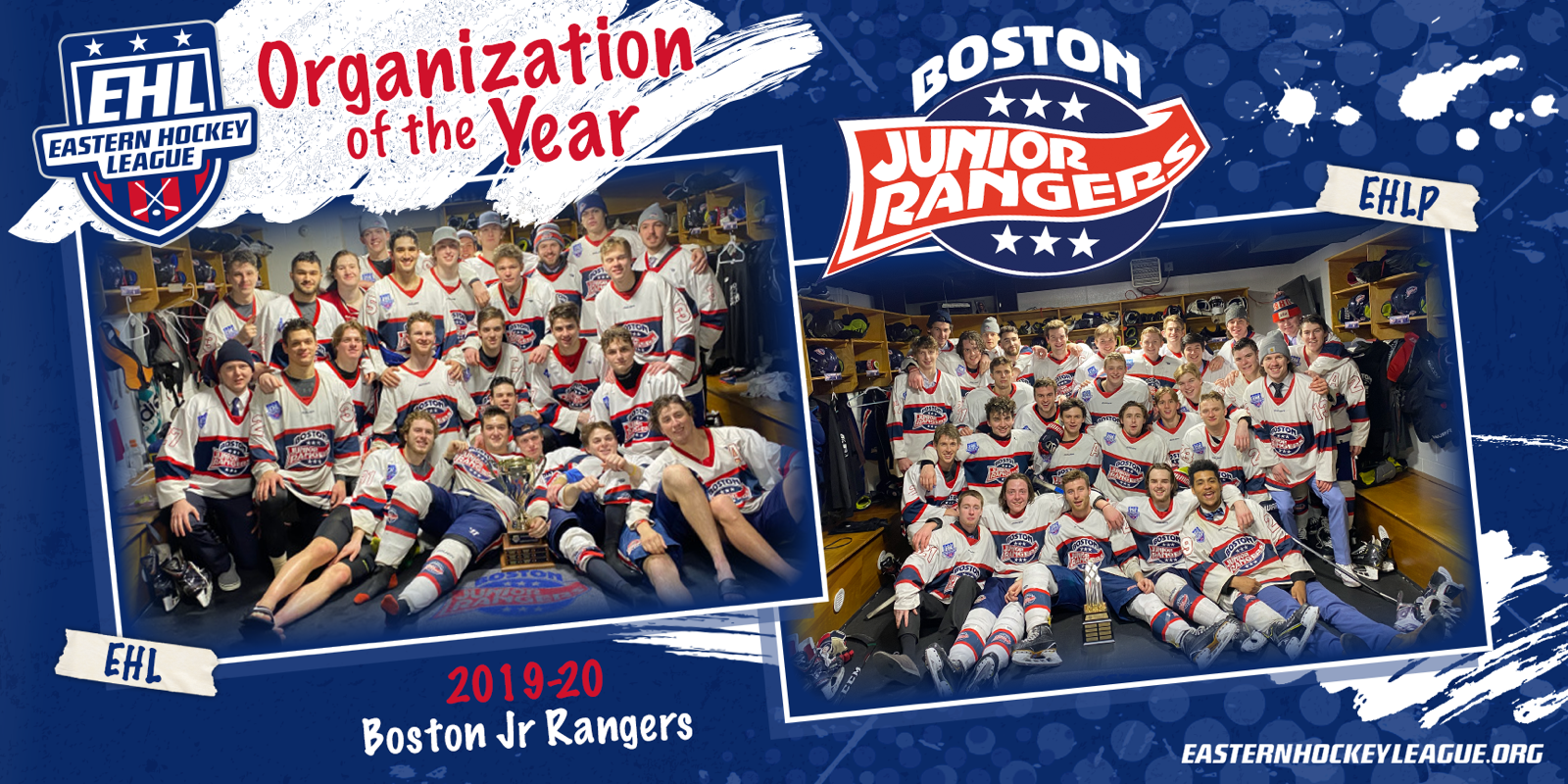 "We are humbled and honored to receive this recognition," said 87's head coach and general manager Adam Houli. "Matt [Kiernan] and I are proud of what we've built in just three years in the league. While we continue to set higher goals for the program, we know this past year was far and away the best we've ever had. Now it's a matter of picking up where we left off when we return to action this fall."

Starting off with the EHL team, and the 2019-20 squad led the way in their conference from the beginning to the end of the regular season. At 36-8-2, the 87's weren't far behind the Rangers for the Regular Season Championship, and riding a seven-game winning streak to end the year, New Jersey was primed for a deep playoff run.

As for the top performers from the 2019-20 team, Andrew Maynard led the team in scoring with 61 points, and also earned a spot on the All-EHL roster. Right behind Maynard was Dante Terramani, whose 55 points led the 2000-born forward to being named the Rookie of the Year. Two more players that earned recognition were Trevor Cear and Ian Graiff, who were each named to the 1st Team in the Mid-Atlantic Conference.

As for the EHLP team, the 87's had actually completed the opening game of their Second Round series when the season was cancelled. New Jersey was just a single victory away from reaching Providence for the first time in program history. At 32-6-3, just like the EHL team, the EHLP team was right behind the Rangers for the Regular Season crown.

Ryan Crane was named to the All-EHLP team, and then the 87's claimed a pair of spots on both the 1st and 2nd All-Conference teams. Thomas Swartwout and Jeremy Connor took home 1st Team honors, while Payton Jones and Ty Carter were named to the 2nd team. In total, the 87's scored 218 goals in the regular season, due in large part to six different players tallying 40 points or more.

Also, as far as records are concerned, Connor climbed his way up the charts throughout the year, and now sits alone at the top as the all-time winningest goalie in EHLP history with 35 total wins.

Congratulations to this year's Organization of the Year in the Mid-Atlantic Conference. 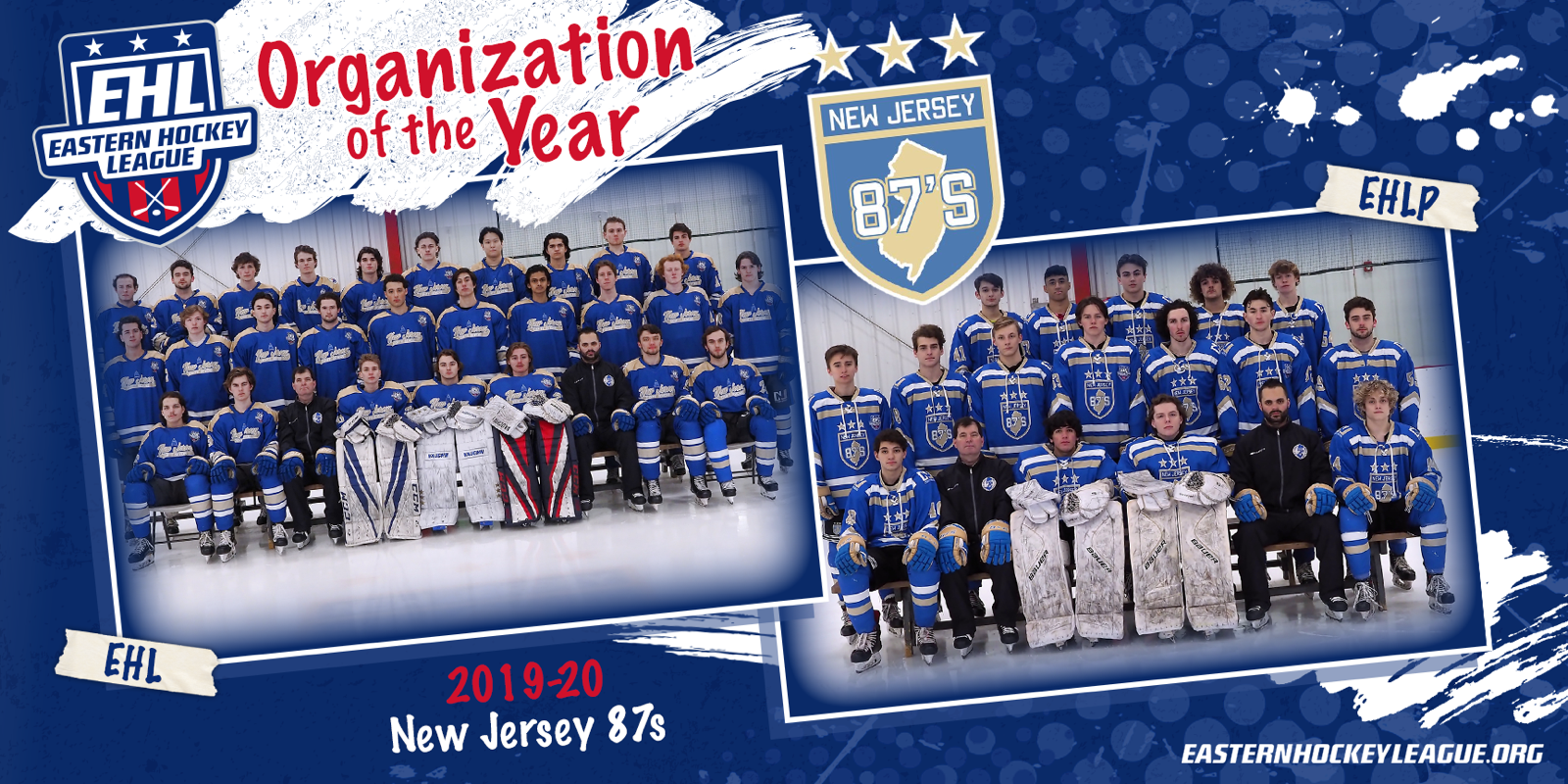 The common saying throughout all of the sports world next year will be 'unfinished business', and that will surely be the case for both of these programs.

While it won't be easy, both the Rangers and the 87's will look to pick up right where they left off, and get back on the road to the 2021 Frozen Finals.