BOSTON, MA -- The Eastern Hockey League (EHL) is pleased to announce the addition of Joe Bertagna to the league's staff. After serving as a commissioner in the NCAA ranks for 38 years, Bertagna will now become the Executive Advisor of the EHL. 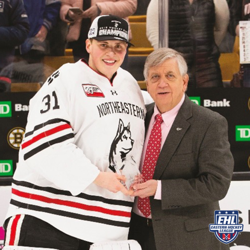 Bertagna poses with Cayden Primeau following the 2019 Hockey East Championship. Primeau was named the EHL Goalie and Rookie of the Year at the end of the 2015-16 season.

"I am thrilled to be offered this opportunity,” said Bertagna. “I look forward to learning as much as I can in a short period of time. And I hope I can contribute to the continued growth of the EHL as the owners envision. I appreciate the confidence they have invested in me.”

Bertagna has enjoyed a unique and distinguished career as a player, a coach, and an administrator. A native of Arlington, MA, he was an outstanding goaltender at Arlington High School before moving on to Harvard University, where he played for Hall of Fame coaches Ralph “Cooney” Weiland and Bill Cleary. He also played one year in Cortina d’Ampezzo, Italy, and for the Milwaukee Admirals.

As a coach, he began a summer goaltending school in 1974 (still active), while working with Tim Taylor, who went on to coach for Yale University and the 1994 U.S. Olympic Team. Bertagna teamed up with Taylor again in 1991 and 1994, serving as Team USA's Goalie Coach for the Canada Cup and Winter Olympics, respectively. He also served six seasons as the goalie coach for the Boston Bruins from 1985 to 1991.

Throughout this period, Bertagna’s primary occupation was as an administrator and he became the longest-serving college hockey commissioner in NCAA history. His 38-year career as a commissioner began with 15 years with ECAC Hockey, followed by 23 years with the Hockey East Association. He was also named the first Executive Director of the American Hockey Coaches Association (AHCA) in 1991, and maintains that position today.

His efforts have been recognized with numerous awards, most notably the USA Hockey Distinguished Service Award and Hall of Fame recognition from Massachusetts Hockey, the Eastern College Athletic Conference, the Women’s Beanpot Tournament, and the Massachusetts High School Hockey Coaches Association.

Located in the Northeast and Mid-Atlantic regions of the United States, the EHL and its 20 organizations celebrate its 8th season in 2020-21.

Please join the EHL in welcoming Joe Bertagna to the #Eshow.