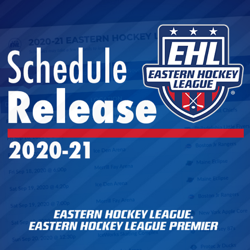 Located in the Northeast and Mid-Atlantic regions of the United States, the EHL and its 18 teams celebrates its 8th season in 2020-21. For the past five years, the EHL has finished as the leader in the Direct-To-College Advancement at the Division II and III levels. This past season alone, the EHL accounted for nearly 1 in every 5 freshmen on Division II and III rosters.

To go along with the NCAA Commitments, the EHL has also helped over 80 players work their way up the USA Hockey Ladder of Development to the North American Hockey League (NAHL) and the United States Hockey League (USHL). This area of advancement is also not limited to just players, as the EHL has seen a number of coaches make the jump up the ladder as well.

The EHLP serves as a sub-division for the EHL. This fall, the EHLP will kick-off its 6th season under the EHL, with 13 teams split up between 3 different divisions. While the name has changed a couple of times, the model remains the same; to help players develop and prepare for the next step in their journey.

The EHL's sub-division has done a great job promoting players up the ranks of junior hockey, and is responsible for a number of the league's NCAA Commitments. Over 200 players have developed at this level and then made their jump up to the EHL. From there, over 75 players have advanced onto college hockey.

While this offseason has been tumultuous to say the least, the #Eshow remains focused on completing full seasons this upcoming year in both the EHL and EHLP. With a players-first mindset, the #Eshow is also committed to making its NCAA Commitments and helping every player advance their careers to the next level.

Stay tuned for more news and updates from the EHL and EHLP, as we gear up to drop the puck on Friday, September 18th.