New Organization Ready to Get Started

BOSTON, MA --  We near closer towards the end of our Team of the Week features with another program that will be working their way through their inaugural campaign this season in the Eastern Hockey League (EHL). 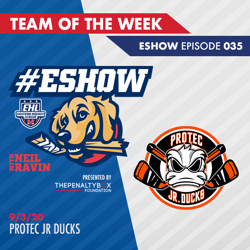 Terry Watt and the Protec Jr. Ducks will be kicking off their inaugural season on Monday, September 21st against the New York Apple Core. A former junior hockey player, Watt was the captain of the Walpole Express back when they had Chris Cerrella, the current Head Coach of the New Hampshire Avalanche, behind the bench. After juniors, Watt followed through with his NCAA Commitment to Buffalo State and then enjoyed a nine-year pro career. Shortly after calling it a career as a player, Watt jumped right into coaching, and it has now all come full circle for him to end up back in the spot that he benefited from the most during his playing days.

When the puck drops in 18 days, the Ducks will become the EHL's 2nd team in the state of New Jersey, joining the 87's. A hockey hotbed, the EHL is proud to have two programs playing out of what has become one of the top junior hockey states on the east coast.

Below you'll find a link to listen to the latest episode of the #Eshow featuring Terry Watt, the Head Coach and General Manager of the Protec Jr. Ducks.