WALL TOWNSHIP, NJ -- Michael Hertzberg, a forward for the New Jersey 87's, has committed to Arcadia University for the fall of 2021.

The 2000-born native of Sewickly, PA, is in his 2nd season with the 87's, and now has a huge weight off of his shoulders, as he works his way through his final year of junior hockey. To date this year, Hertzberg has a goal and an assist through his first four games, which puts him on a good pace to surpass the totals he put up this past season.

"Michael is a perfect example of someone who believed in what we had to say about his game, wanted to get better, and develop," said 87's head coach and general manager Adam Houli. "He worked his butt off all summer and was focused from the start. He had a great training camp and performed when Coach Vin skated with our team. He is a great get for the program and he will excel in college. I’m excited to watch him continue to get better, each and every day."

The Arcadia University Knights are a new program, that will kick-off their inaugural season in October of 2021. Competing out of the United Collegiate Hockey Conference (UCHC), Arcadia will jump right in with some of the top teams in all of NCAA Division III hockey. Hertzberg is excited about helping to set the foundation for the new program.

"Committing to a prestigious academic school like Arcadia with a coach who has worked at the Division I level is an honor," said Hertzberg. "Coach Pietrangelo's knowledge about the game of hockey and what it takes to excel in the collegiate level both on and off the ice illuminates the school and their hockey program at the Division III level, as well as in their conference."

Hertzberg went on to thank the 87's program for helping him reach this accomplishment.

"Last season, Coach Houli and Coach Kiernan helped me understand the systems in all three zones of the ice and how 87's hockey is played," added Hertzberg. "I was not in the lineup for every game, but I just told myself to keep working on and off the ice, to ask the coaches detailed and honest questions about what is expected, and to also watch and try to emulate the veteran players who have experienced the process and understand what it takes to get to the next level in hockey and as an athlete." 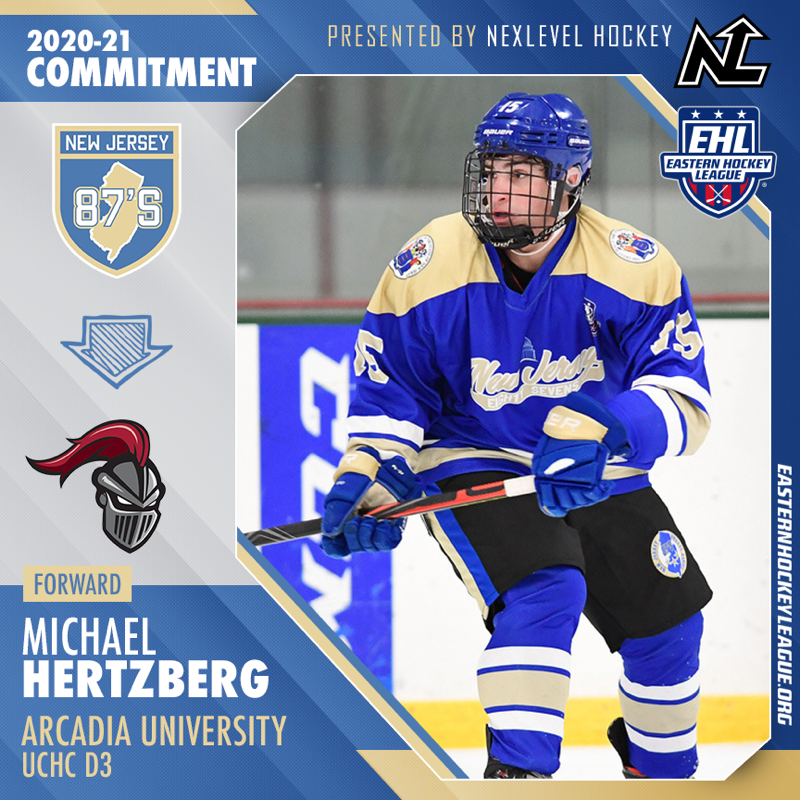