Below you'll find the 3rd set of weekly top performers in the #EShow. The forward and defenseman awards are presented by Verbero Hockey, while the goalie honors come courtesy of Vaughn Custom Sports.

Swain and the 87's improved their record up to a perfect 6-0-0 for the year, after picking up wins over the Philadelphia Little Flyers on Friday and Monday. The 2000-born native of Jackson, NJ registered multi-point outings in each contest, including both game-winning goals. Overall, Swain scored three goals total in the two games, and added in four assists as well.

For the season, the veteran forward now has an even seven goals and seven assists through six games, which ranks him 5th on the league scoring charts. After joining the 87's in mid-December this past year, Swain tallied 16 points in 25 total games. Now in his final year of junior hockey, Swain will likely surpass those totals before the end of the 2nd month of the season. Coming up this week, Swain and 87's face-off with the New York Apple Core in a home-and-home series on Thursday and Monday.

Minnig and the Avalanche got back on track this past week, picking up a 4-1 win over the Seahawks Hockey Club on Wednesday. In that contest, the '01 native of Reading, PA notched his first two assists of the season for the Avalanche. With the win, New Hampshire improved their record up to 4-1-0 for the year, which puts them in a tie with the New England Wolves for 2nd place in the New England Conference.

Coming up this week, Minnig and the Avalanche have a busy schedule that starts with a top-five matchup against the #2 Vermont Lumberjacks on Wednesday. Following Wednesday's showdown, the Avalanche will host the Railers Jr Hockey Club on Thursday, and Seahawks for meeting #2 on Sunday.

Finishing things off between the pipes, Pryymak and the Eclipse picked their first win in franchise history this past Thursday, by the score of 4-1 over the Seacoast Spartans. The victory came nearly a week after the Spartans had come back to beat the Eclipse in a 6-5 overtime thriller. However, with Pryymak in net this time around, Maine was able to close the door, and grab their first win.

The '01 native of Summit, NJ was simply spectacular between the pipes, turning aside 48 of the 49 shots that he faced from the 1st-place Spartans. The schedule doesn't get any easier for Pryymak and the Eclipse, as they take on the Seahawks in a two-game set, Tuesday and Wednesday in Exeter, NH.

Borisov and the 87's split their pair of games against the Philadelphia Little Flyers this past weekend at the IceWorks Skating Complex. The '03 native of Metuchen, NJ scored a trio of goals combined between the two games, running his season total up to 10 points in five games to date. When you compare to this past year, Borisov's first season of the junior hockey, the young playmaker is on a pace to surpass the 45 points he notched in 42 total games.

Coming up this week, Borisov and the 87's will travel to take on the New Jersey Renegades on Friday, a team they've beaten by scores of 9-4 and 5-2 so far this year.

Schmidt and the Avalanche won both of their games this past weekend, beating the Valley Jr Warriors by the scoring of 6-2 on Saturday night, and then knocking off the top-ranked Boston Jr Rangers yesterday afternoon in overtime (5-4). The '02 native of East Northport, NY was huge for his team all weekend long, scoring a pair of goals and dishing out three assists.

For the season, Schmidt now has nine points through five total games, which ranks him 1st overall in the EHLP for defensive scoring. At 5-0-0, the Avalanche have a busy week ahead that includes a matchup with the Vermont Lumberjacks tomorrow at 12:30 pm, a rematch with the Rangers on Friday at 3:20 pm, and the first meeting of the season with the Walpole Express on Saturday at 4:50 pm.

In between the pipes, Herman earned some revenge over the Renegades, whom he lost to back in September. This time around, the '01 native of New Rochelle, NY was unbeatable, stopping all 41 shots that were sent his way. With the win, Herman is now 1-1-0 through his first two starts, and owns a 1.50 GAA and a .952 save percentage.

Coming up this week, the Chiefs are set to host the Valley Jr Warriors on Friday night, the 6th game of the year in a stretch that keeps them at home for the first 10 games of the season. 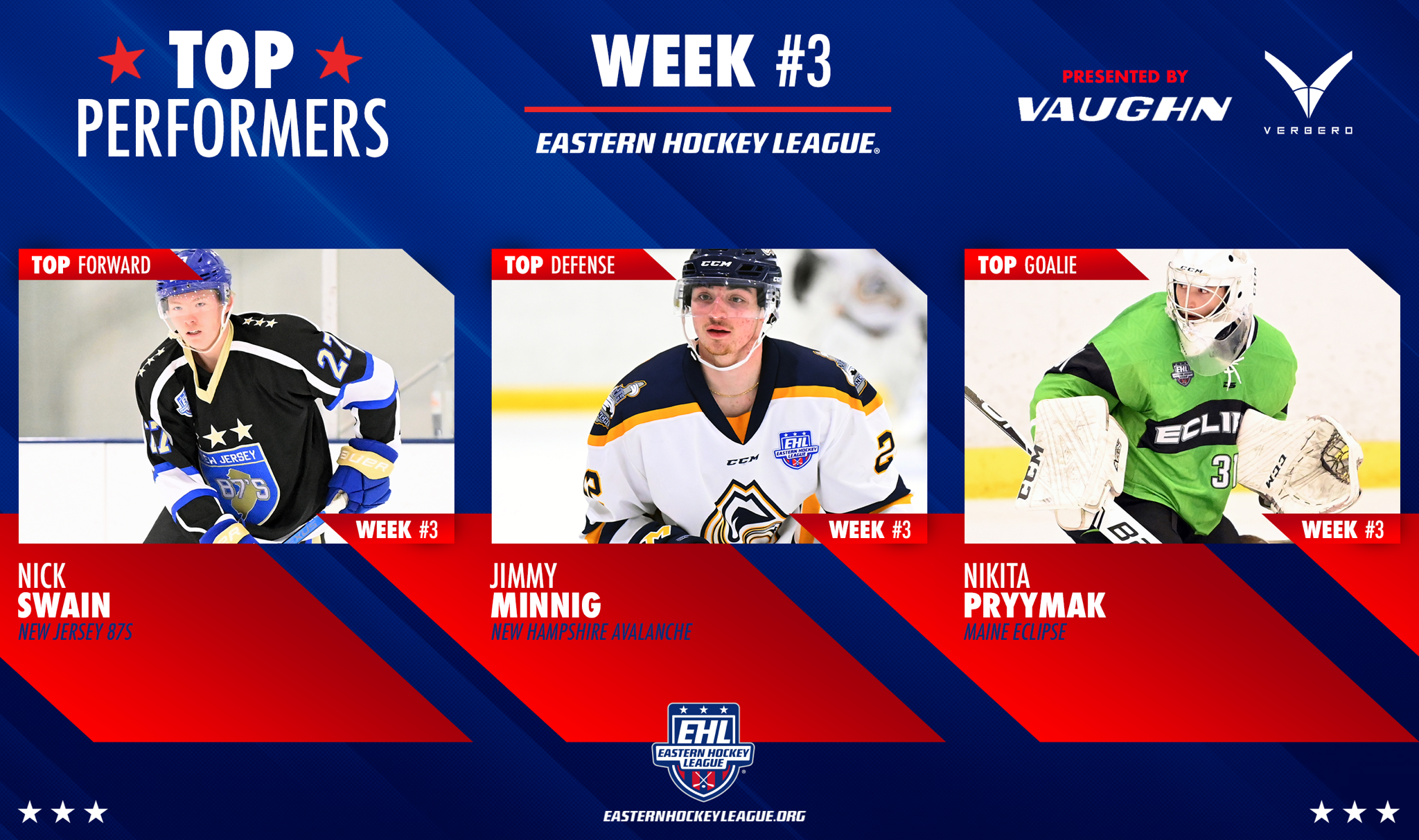 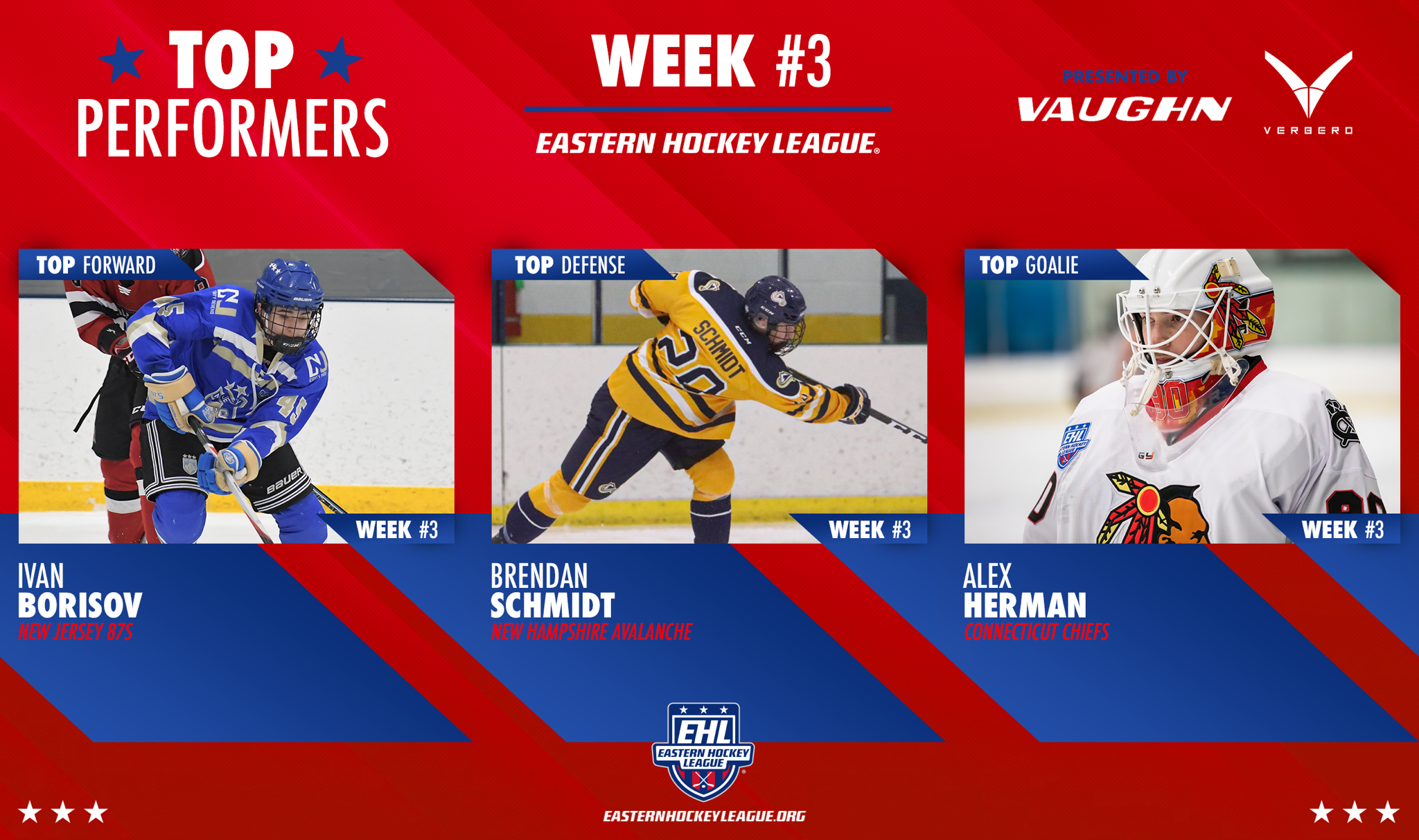