TEWKSBURY, MA -- Jackson Legro, a defenseman for the Boston Jr. Rangers, has committed to Lebanon Valley College (LVC) for the fall of 2021.

The 2000-born native of Brentwood, NH is in his first and last season with the Rangers, as he chose to come to the Eastern Hockey League (EHL) for his final year of junior hockey. In four total games so far this season, Legro has tallied three goals and one assist to his name.

"We've enjoyed working with Legro so far this season," said EHL head coach and general manager Rich DeCaprio. "He’s a big, strong kid that can skate and defend. After signing him, and speaking with coach Parsons, we were confident he would have a major impact on our program and league. [Keith] Aucoin and I look forward to helping him develop into a player that can make an immediate impact for Coach Parsons as a freshman."

Don Parsons is the head coach at Lebanon Valley College, and a big reason why Legro chose the Rangers for his final season of junior hockey.

"LVC is fortunate to have received a commitment for the 2021-22 season from Jackson Legro," said Parsons. "I first saw Jackson at the 2019 Chowder Cup tournament in Boston. I immediately noticed his skill set, size, and skating ability. As I continued to watch him that game I couldn’t help but notice his demeanor and body language that he demonstrated every shift. As it so happened, I was standing with an old friend of mine at the time who knew Jackson and his family.  Those are the moments we look for as coaches on the recruiting trail. Moving forward a bit, I kept a close eye on him as he went up and played in the NOJHL. He made a huge impact right away for his team, and on myself and our staff. Jackson will undoubtably be a huge impact player for us at Lebanon Valley College when he arrives in August of 2021. For this year, he will be playing for Coach DeCaprio with the Boston Jr. Rangers, and I am confident that not only will Jackson lead their d-core, but Coach DeCaprio and Coach Aucoin will further develop Jackson and his skill set. I wish Jackson and the entire Rangers team the best of luck this season!"

To have that feeling of confidence from a future coach, along with the weight of the commitment off his shoulders, is something that Legro is very thankful for. Now the 2020-21 season can be focused primarily on developing as a player both on and off the ice.

“I really look forward to playing college hockey at Lebanon Valley College," said Legro. "Playing for Coach DeCaprio the Jr. Rangers will be the perfect place to develop my game and get me ready for college hockey."

Learn more about the Rangers on the team's official website, and check out the full 2020-21 NCAA commitment list. 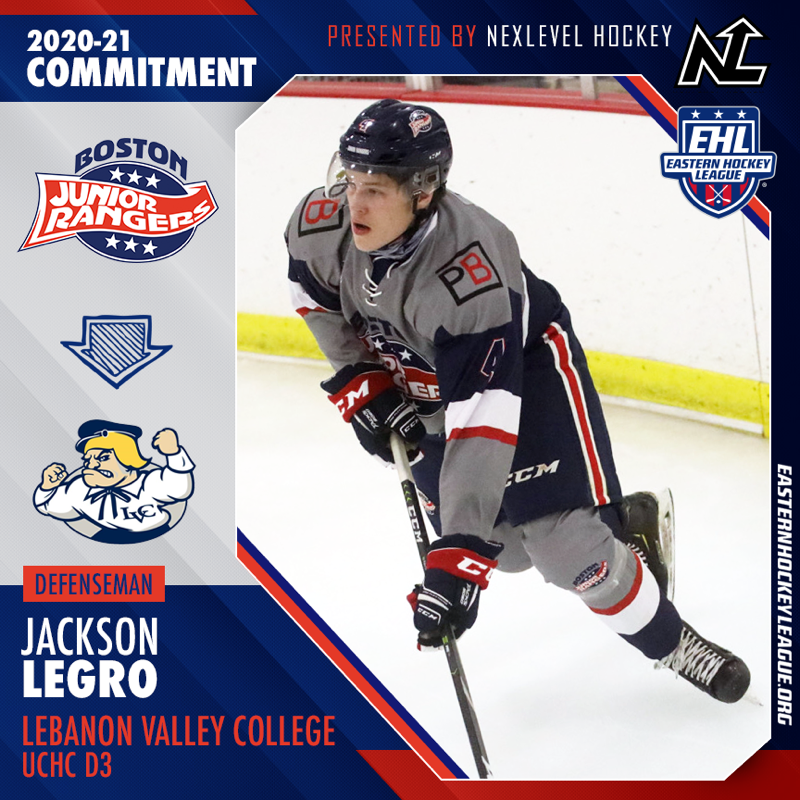