Simon Headlines Newest Set of Stars of the Week

Below you'll find the 5th set of weekly top performers in the #EShow. The forward and defenseman awards are presented by Verbero Hockey, while the goalie honors come courtesy of Vaughn Custom Sports.

The EHL is pleased to announce that Zack Simon (Walpole Express), Connor Nagy (Vermont Lumberjacks), and Adam Faust (Connecticut RoughRiders) have been named the Top Performers for Week #5.

Simon and the Express won a pair of one-goal games this past week against the Maine Eclipse and the Connecticut Chiefs. The '01 native of Orono, MN was the offensive catalyst for his team scoring five goals in the two games, and adding an assist to his name as well. Included in Simon's hat-trick performance on Saturday night against the Chiefs, was the game-winning goal in a 5-4 victory.

Overall, Simon now has seven goals and four assists through his first eight games in the EHL. After a rough start with a handful of tough opponents to kick-off the year, Walpole has now won three straight games, with eight more contests currently scheduled between now and Thanksgiving.

On the blue line, the Nagy and the Lumberjacks also got things back on track this past week, with a three-game sweep of the Valley Jr Warriors. The '01 native of Trenton, MI notched a pair of assists in the 7-5 win on Tuesday, and then two more assists in the 5-3 victory on Wednesday. Those four points were Nagy's first of the season, who similar to Simon, is playing in his first year in the EHL.

Wrapping things up between the pipes, Faust and the RoughRiders won two of their three games this past week, with the 2000-born netminder in goal for each victory. Faust began the week by turning away 43 of 46 shots in a 4-3 shootout victory over the New Jersey 87s, handing the top-ranked team from the Garden State their first loss of the season. Faust then followed things up by stopping another 40 shots in a 3-2 overtime victory over the Chiefs.

For the season, Faust owns a perfect record of 5-0-0 to go along with a 2.76 GAA and a .929 save percentage. After falling at the hands of the New York Apple Core yesterday, Faust will look to get his team back on track with two more home games coming up this week.

The EHLP is pleased to announce that James Mattson (New Jersey Renegades), Dylan Stahl (Walpole Express), and Trevin Jensen-Rose (Valley Jr Warriors) have been named the Top Performers for Week #5.

Mattson and the Renegades won their only game of the week, in convincing fashion, by the final score of 6-0 over the Philadelphia Little Flyers. The '02 native of Randolph, NJ led his team offensively, registering a four-point night, including his first hat-trick of the season. For the year, Mattson now has 16 points through his first 11 games, and the Renegades are right in the thick of things with a record of 4-6-1.

Coming up this week, the Renegades will look to make it two in a row against the Little Flyers, when they host their South Division rival on Friday night at 7:55 pm.

We move up to the Central Division for our next two Stars of the Week, as Stahl and the Express beat the Connecticut Chiefs by the score of 5-2 on Saturday night. The '01 native of Newport, MA tallied three points in the contest, with a pair of goals plus a primary assist. For the season, Stahl now has five points through his first seven games, which puts him on a great pace to surpass the 11 total points he tallied this past season.

Wrapping things up between the pipes, Jensen-Rose and the Warriors split their two-game series with the Vermont Lumberjacks, and the '04 native of Sandy, UT was in net for the victory on Tuesday.

After turning away 38 of the 39 shots that the Lumberjacks sent his way, Jensen-Rose played a key role in leading his team to the 2-1 overtime victory, his first win of his junior hockey career.

With the current rink shutdown in the state of Massachusetts, the Warriors are off until November 11th, when they take on the 1st-place Boston Jr Rangers. 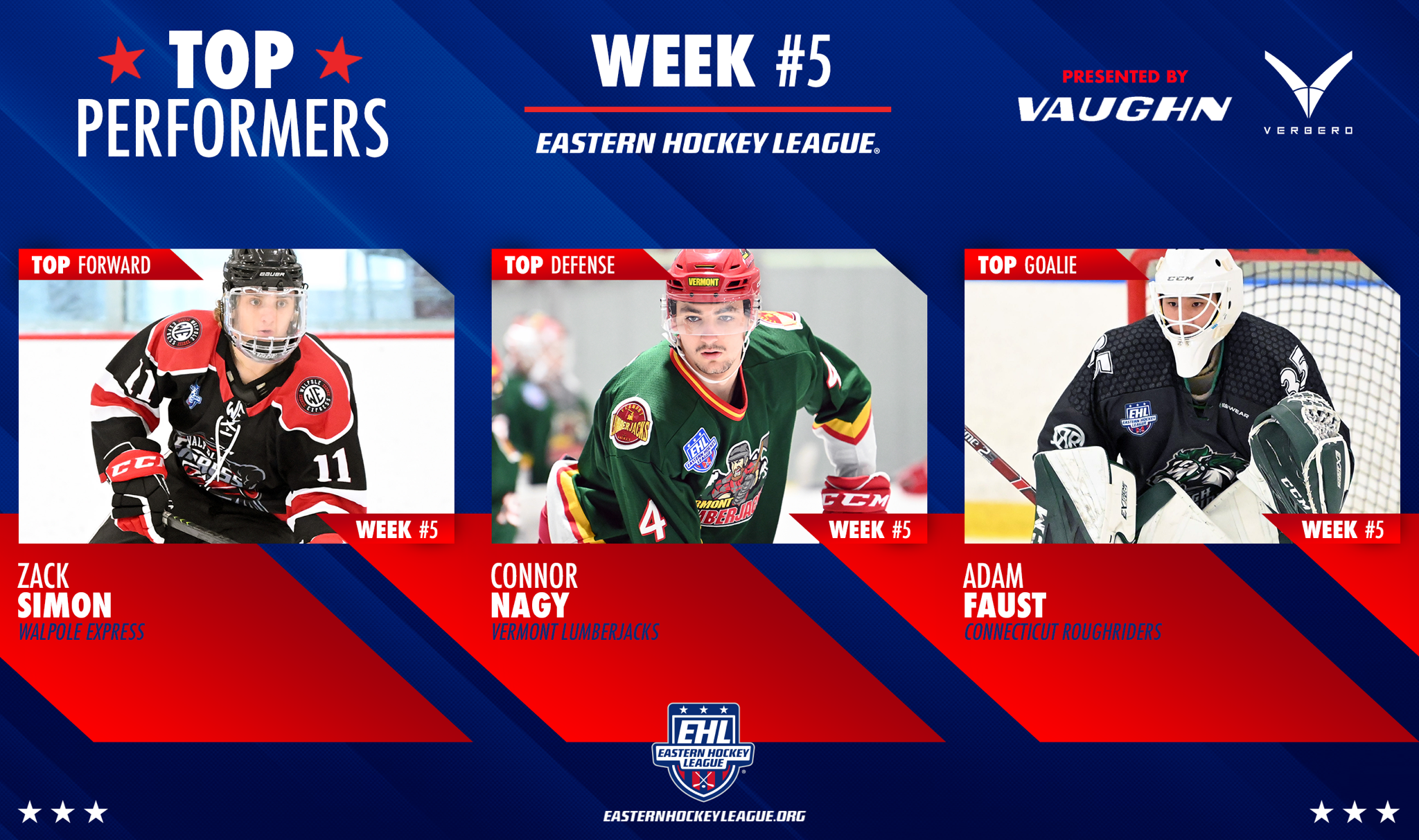 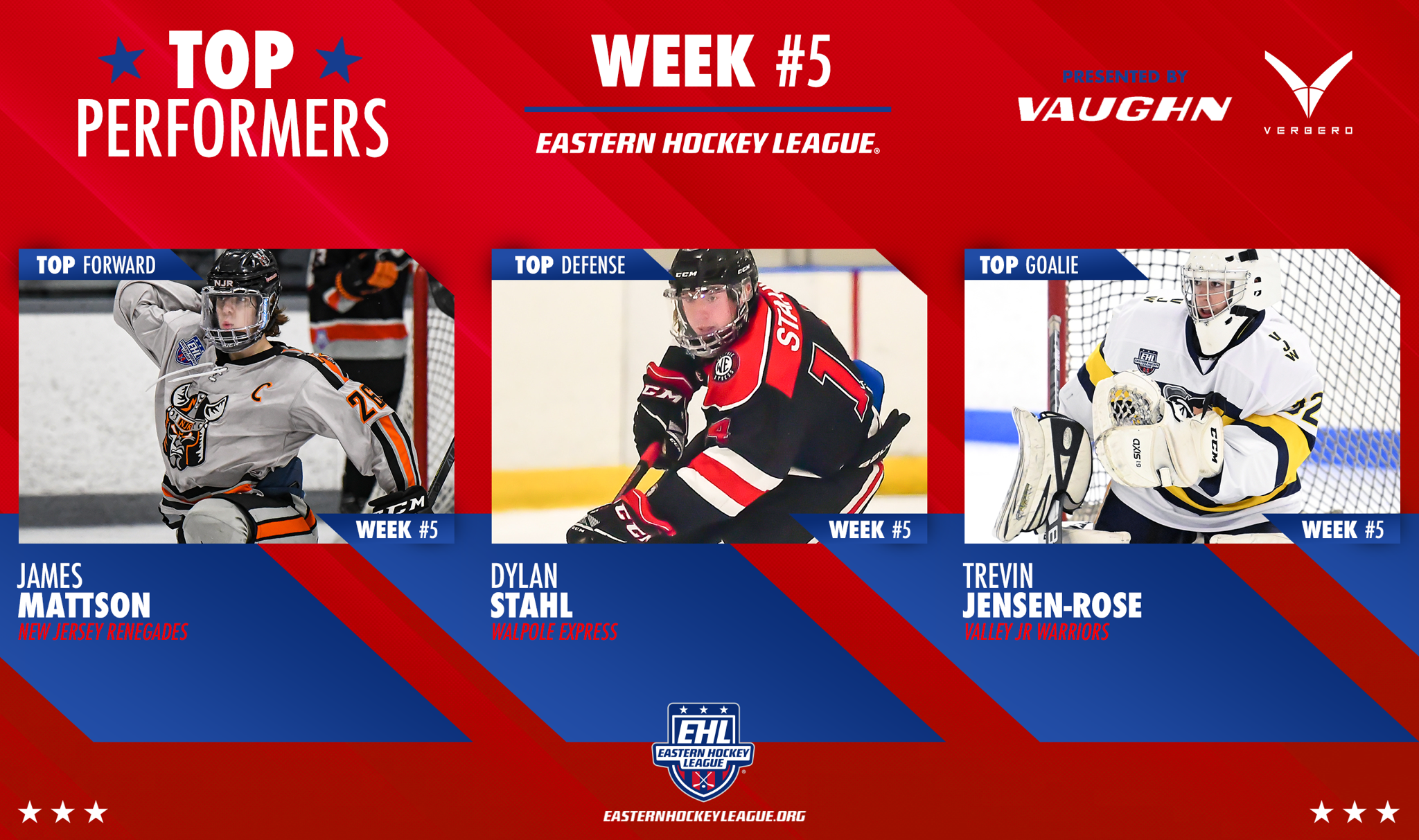