HOOKSETT, NH -- Connor Thomas, a defenseman for the New Hampshire Avalanche, has committed to Suffolk University for the fall of 2021.

"We are so very proud of Connor Thomas," said Avalanche head coach and general manager Chris Cerrella. "He is a great example that if you believe in the process and you compete for everything, you will find success in the end. He has stepped up in a big way after a great off-season, and is our Assistant Captain this season, after playing most of his games with our Premier team last year. Connor didn’t want to skip the steps, Connor conquered the steps. I think he is going to be a great addition to Suffolk University and a great addition to their hockey program. I am looking forward to seeing Connor play college hockey next season.”

Thomas goes in the books as the 20th player in league history to choose the Suffolk hockey program, and 4th Avalanche player to commit to the Rams. Thomas will join Nathan Pickett from the 2018-19 Avalanche squad, and Ryan Harrigan and Kyle Valiquette, from this past year's team.

“I’m extremely excited to announce my commitment to continue my athletic and academic careers at Suffolk University," said Thomas. "I would like to thank Coach Cerrella, Coach Martiniello, Coach Caligiuri, as well as the rest of the New Hampshire Avalanche organization, all of my former coaches and trainers, and all of my friends, family, and loved ones. No organization and league does a better job of preparing players for college hockey than the New Hampshire Avalanche and the EHL. I am very grateful to have the opportunity to play in such a high-class environment.”

With rinks re-opening in the state of New Hampshire, Thomas and the Avalanche are preparing their return to the ice this upcoming week. The team will return to game action on Wednesday, November 4th, when they host the Seacoast Spartans at 1:40 pm. 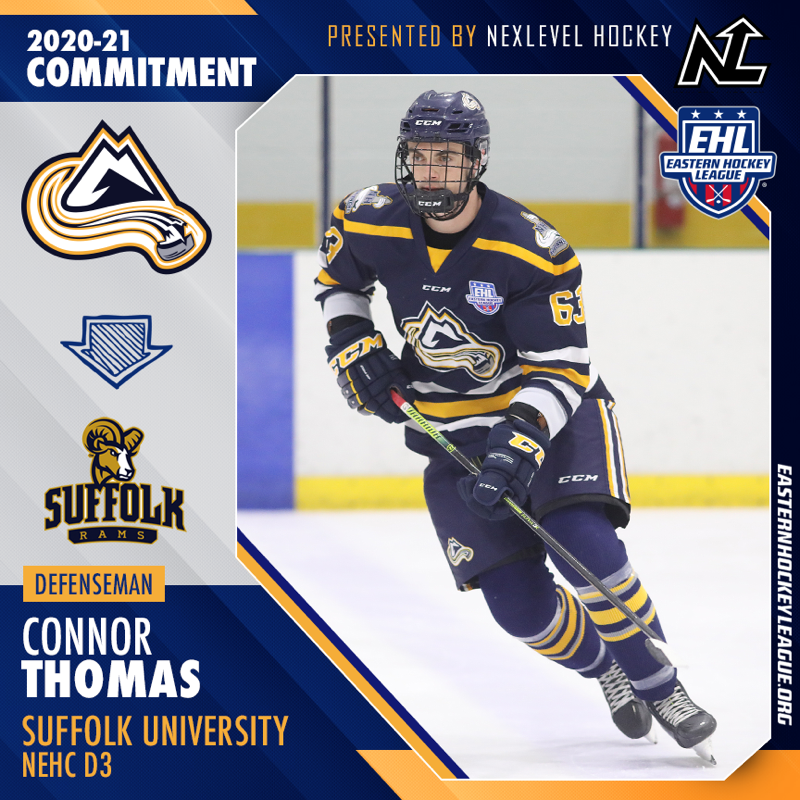