ODENTON, MD -- Halen Cookston, a forward for Team Maryland, has committed to Arcadia University for the fall of 2021.

The 2000-born native of Santa Clarita, CA is in his first season with Team Maryland, and in 11 total games to date, Cookston has tallied seven goals and five assists to his name. Cookston chose the Eastern Hockey League (EHL) for his final season of junior hockey, and it paid off for him almost immediately.

"Halen exemplifies hard work and dedication to the game, both on and off the ice," said Maryland head coach and general manager Josh Fusco. "He brings so much to a lineup and I am extremely happy for him and his decision to attend Arcadia to continue his hockey career and pursue/achieve his academic goals."

Halen joins what is becoming a strong incoming class at Arcadia for the fall of 2021, as there are four other players from around the EHL that have made the same decision. Cookston will be joined by his current teammates Kyle Peters and Mike Kocsis, and Mid-Atlantic Conference rivals Michael Hertzberg of the New Jersey 87's and Jake Frankenfield of the Philadelphia Little Flyers.

"Thank you to Team Maryland and Coach Fusco for the chance to play in the Eastern Hockey League this season," said Cookston. "It gave me the opportunity to showcase my skills and ended in my commitment to Arcadia University."

Cookston and Team Maryland are currently tied for 2nd place in the conference with the Connecticut RoughRiders, but they do own four games in hand over the south opponent. The upcoming schedule for Maryland includes a two-game series with the New York Apple Core on Monday and Tuesday. 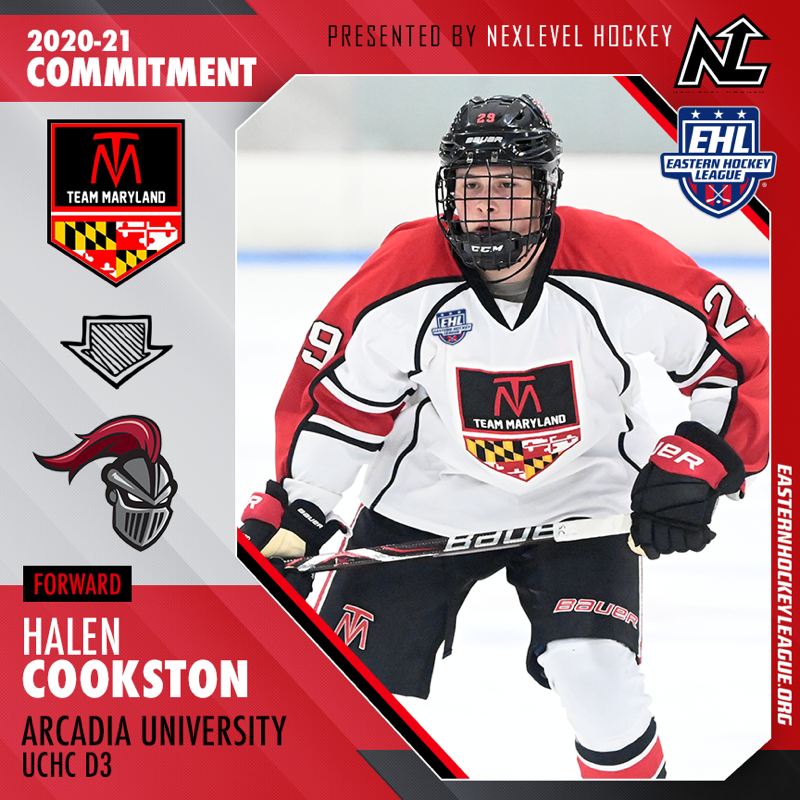