Despite Wild Week, No Changes at the Top

Kicking things off in the EHL, the top-ranked New Jersey 87's dropped their only game of the week in an overtime defeat at the hands of Team Maryland. The 87's remain the only team in the league yet to have lost a game in regulation so far this season.

The #2 Boston Jr Rangers beat the Seahawks Hockey Club on Tuesday, and then split their home-and-home series with #4 Walpole Express over the weekend. While the Rangers suffered their first regulation loss of the season to the Express, the defending Regular Season Champions still maintain a near-perfect record at 11-1-1 through their first 13 games of the season.

At #3, the New Hampshire Avalanche quickly avenged a loss on the 8th, with a trio of victories over the Vermont Lumberjacks, New England Wolves, and Seacoast Spartans this past weekend. At 11-2-0, and with an even number of games played, the Avalanche find themselves just one point behind the Rangers at the top of the New England Conference standings.

At #4, despite seeing their winning streak snapped at home against the Rangers, the Express returned the favor when the venues flipped on Saturday, and also shut-out the Railers Jr Hockey Club earlier in the week.

Wrapping things up at #5, Maryland is back after picking up a big win over the 87's, and then following things up with a victory over the Philadelphia Little Flyers.

Shifting down to the EHLP, the #1 New Hampshire Avalanche remain the only team with an immaculate record to date. At 11-0-0, the Avalanche have outscored their opponents 60-25 so far this season, and that includes a 5-2 victory over the New England Wolves yesterday afternoon.

Right behind the Avalanche, and following suit with their EHL team, the Boston Jr Rangers are ranked #2 in the EHLP with a record of 8-1-3. After dropping a shootout to the Walpole Express on Tuesday, the Rangers rebounded with a 4-0 shutout over the Valley Jr Warriors on Wednesday, and then a weekend sweep of their home-and-home series with Walpole on Saturday and Sunday.

Wrapping up the EHLP rankings, the #3 New Jersey 87's hold steady with a record of 9-3-1 at the top of the South Division. Then, last but not least, the #4 Railers Jr Hockey Club won both of their games this past weekend while outscoring their opponents 11-1. This is the Railers' first appearance in the top-four this season. 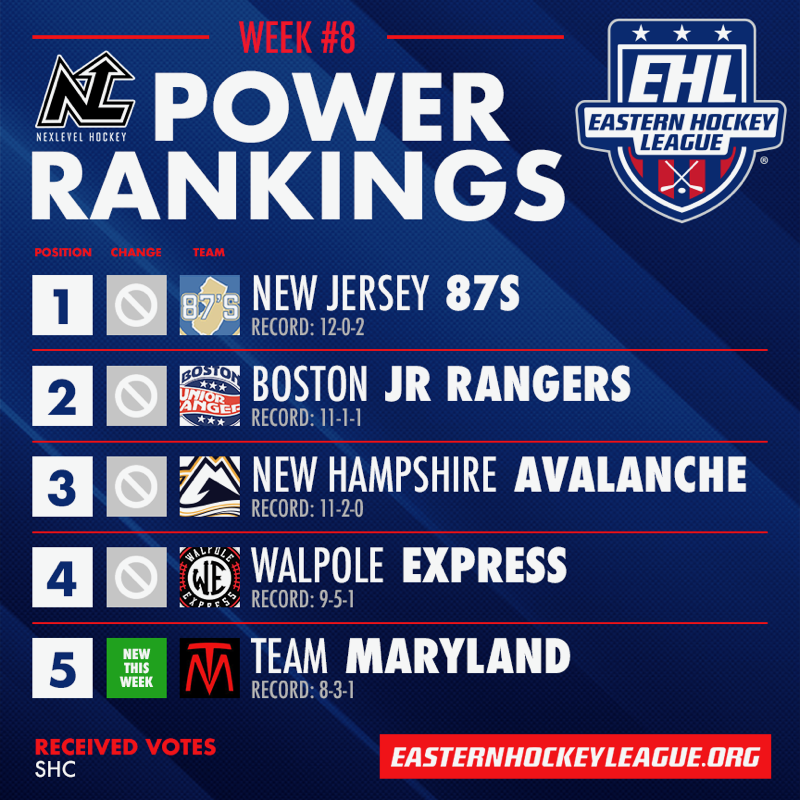 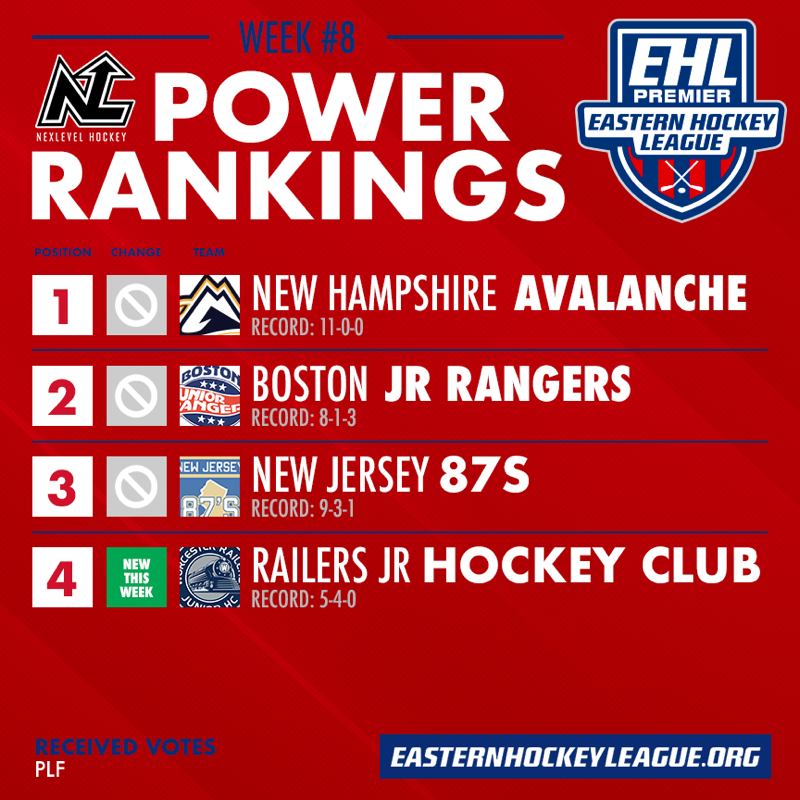