Avalanche Goaltenders Headline Newest Set of Stars of the Week

Below you'll find the 8th set of weekly top performers in the #Eshow. The forward and defenseman awards are presented by Verbero Hockey, while the goalie honors come courtesy of Vaughn Custom Sports.

Phillips and the Chiefs swept their home-and-home series this past week against the Connecticut RoughRiders. After picking up a 4-3 home victory at Newington Arena on Thursday, the series shifted down to SoNo Ice House on Saturday, and finished with a 6-2 Chiefs' win.

Moving back to the blue line, Halbig and the Avalanche bounced back with a trio of wins this past weekend against the Vermont Lumberjacks on Friday, the New England Wolves on Saturday, and the Seacoast Spartans on Sunday. The '01 native of Queenstown, MD scored the game-winner against the Spartans on Sunday, and also added in a couple assists over the course of the weekend. For the season, Halbig now has seven points in 13 total games, which puts him on a great pace to surpass the 16 total points he tallied throughout the entire 2019-20 season with the Philadelphia Revolution.

As for the netminder, McMichael stood tall between the pipes in the 4-0 shutout victory over Lumberjacks, and the 6-2 win against the Wolves. For the season, McMichael now owns a mark of 8-1-0 through nine total starts, to go along with a 1.44 GAA, a .953 save percentage, and 3 shutouts. The 2000-born native of Goldens Bridge, NY leads the league in wins and all three goaltending categories.

Bouchard and the Little Flyers took care of business this past weekend, completing a sweep of their home-and-home series with the New Jersey Renegades. Similar to his first Star of the Week honor (Top Performers - Week #6), the 2000-born native of Newark, DE served as the offensive catalyst for his team this past weekend. Combined between the two games, Bouchard tallied eight total points, notching an even four goals and four assists to his name. For the season, Bouchard now leads all EHLP scorers with 26 points through 14 total games.

On the blue line, Sacco and Railers won both of their games while outscoring their opponents by a combined margin of 11-1, and moving inside the EHLP Power Rankings for the first time this season. As for the '04 native of Shrewsbury, MA, Sacco scored his first career junior hockey goal against the Walpole Express on Friday night, and collected a pair of assists throughout the weekend. At 5-4-0 the Railers are right in the thick of things in the middle of Central Division, with a big matchup scheduled for Saturday night against the 1st-place and 2nd-ranked Boston Jr Rangers.

In goal, following in the footsteps of McMichael at the EHL level, Peremba led his team to a pair of wins this past weekend. the '02 native of South Park, PA began the weekend with a 30-save victory over the Vermont Lumberjacks on Friday, and then added 22 more saves in a win over the New England Wolves on Sunday. For the season, Peremba is now 4-0-0 and owns a 2.00 GAA and .929 save percentage. Alongside Nathan Burlew and Nick Maringola, the three young netminders have helped to lead the Avalanche to a perfect start at 11-0-0 through their first 11 games. 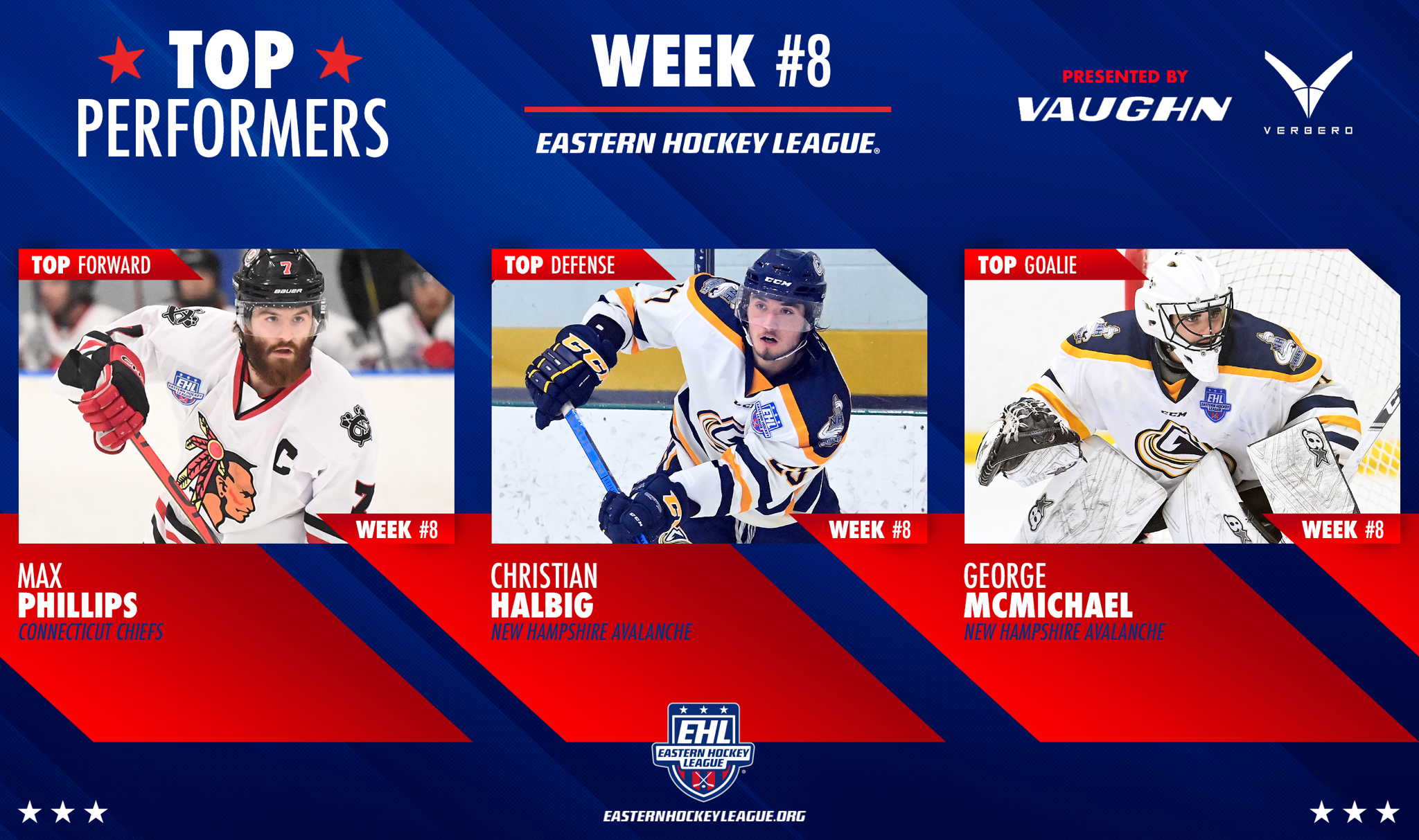 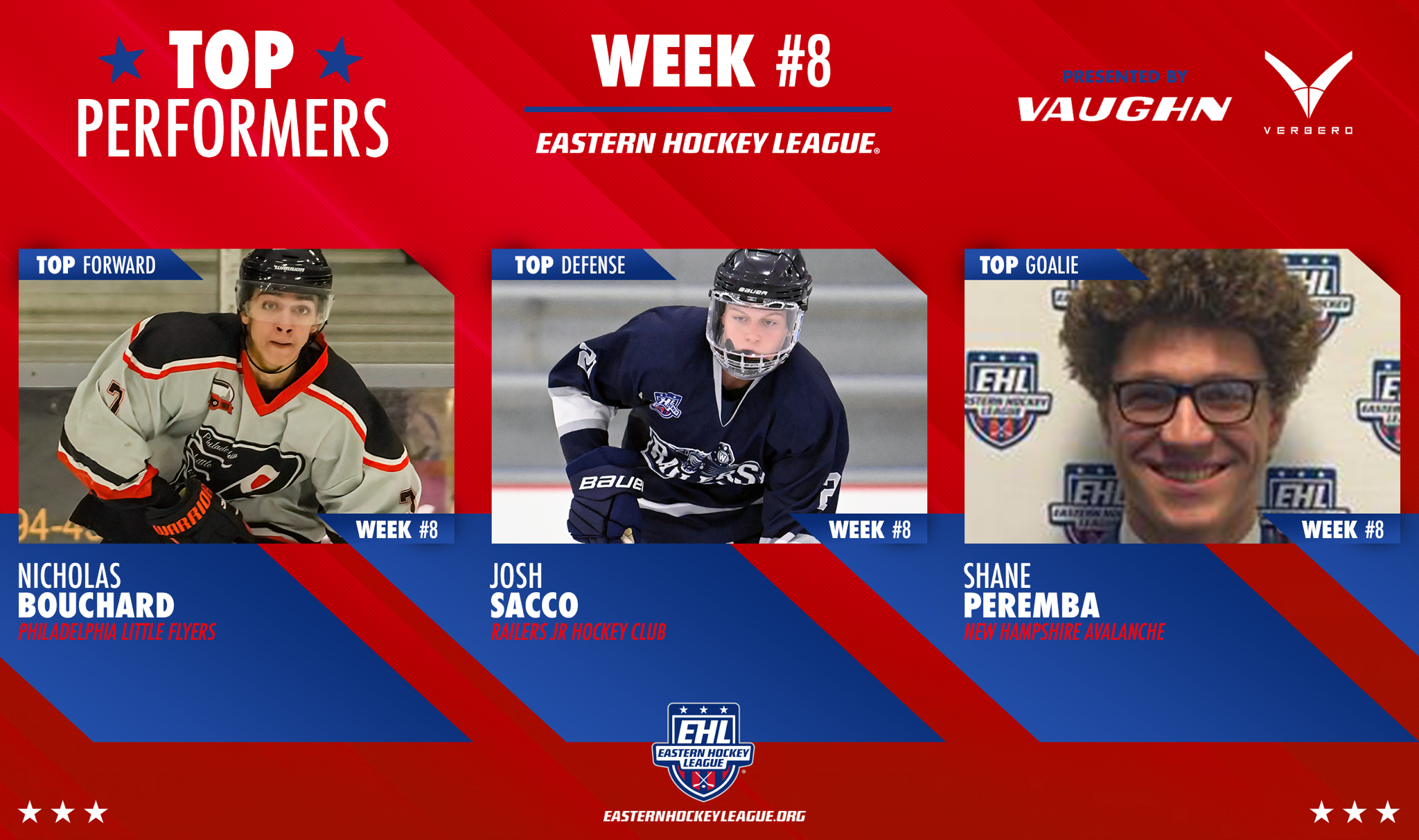