Rangers and Warriors Each Take Home Pair of Honors

Below you'll find the 9th set of weekly top performers in the #EShow. The forward and defenseman awards are presented by Verbero Hockey, while the goalie honors come courtesy of Vaughn Custom Sports.

Gattone and the Little Flyers took care of business this past weekend, completing a two-game sweep of the New York Apple Core. The 2000-born native of Havertown, PA tallied five total points over the course of the weekend, running his season total up to 14 points for the year. The veteran forward tallied 25 total points in 48 total games this past season, and 14 total points in 45 games the previous year. It's safe to say that Gattone is on a great pace to set a career high in his final year of junior hockey.

At 6-8-1, the Little Flyers are right in the thick of things in the Mid-Atlantice Conference, with a big two-game series coming up next week against the Protec Jr Ducks.

On the blue line, Biddle and the Warriors were as busy as any team this past weekend, playing three games in four days. Valley came away victorious in a pair of those contests, led in large part by the play of the 2000-born native of Andover, MA. Biddle tallied five total points in the three games, and is currently riding a five-game point streak.

With an even 13 points in 13 total games, Biddle is one of only a handful of defensemen that average a point per game or better in the EHL. The veteran defenseman will look to keep his team rolling when they wrap-up their home-and-home series with the East Coast Wizards later this afternoon.

Mueller and the Rangers hit the ice for just a single game this past week, but kept things rolling with a 4-1 victory over the Wizards on Friday. As for the '01 native of Rogers, MN, the 37-save performance earned himself his 8th win of the season. Overall, Mueller owns a mark of 8-1-0 to go along with a 1.78 GAA and a .947 save percentage.

The October Goalie of the Month now has two awards to his name for the season, on a Rangers team that is looking just as strong last year's group that won the franchise's first-ever Regular Season Championship.

EHLP STARS OF THE WEEK #9

Similar to their EHL team, Dewhurst and the Rangers took care of business in their only game on the schedule this past week. The '02 native of Andover, MA collected three points in an 8-1 victory over the Warriors this past Wednesday. The three-point game was the best output of the season for Dewhurst, who doubled his overall point in just a single game.

Dewhurst and the Rangers are back in action next on December 5th, when they host the Warriors at 7:30 pm.

Back on defense, this is the 2nd award of the season for Peiffer, and he's equally as deserving as when he earned his first honor (EHLP Stars of the Week #2). Peiffer and the 87's won both of their games this past weekend, sweeping their home-and-home series with the New Jersey Renegades. The '03 native of Montclair, NJ was far-and-away his team's best player tallying five total points in the two games. Included in the five-point weekend was the overtime winner on Saturday night in Randolph, NJ.

Wrapping things up between the pipes, Hanson earned revenge on Friday when his team picked up a 4-2 victory over the Railers Jr Hockey Club. After dropping his previous game with the Railers, the '01 native of Boxford, MA put together a great performance the 2nd time around. Hanson turned aside 29 of the 31 shots he faced en route to the victory.

Hanson and the Warriors will now look to keep the momentum rolling with a matchup against the Walpole Express on Saturday, and another meeting with the Railers on Sunday. 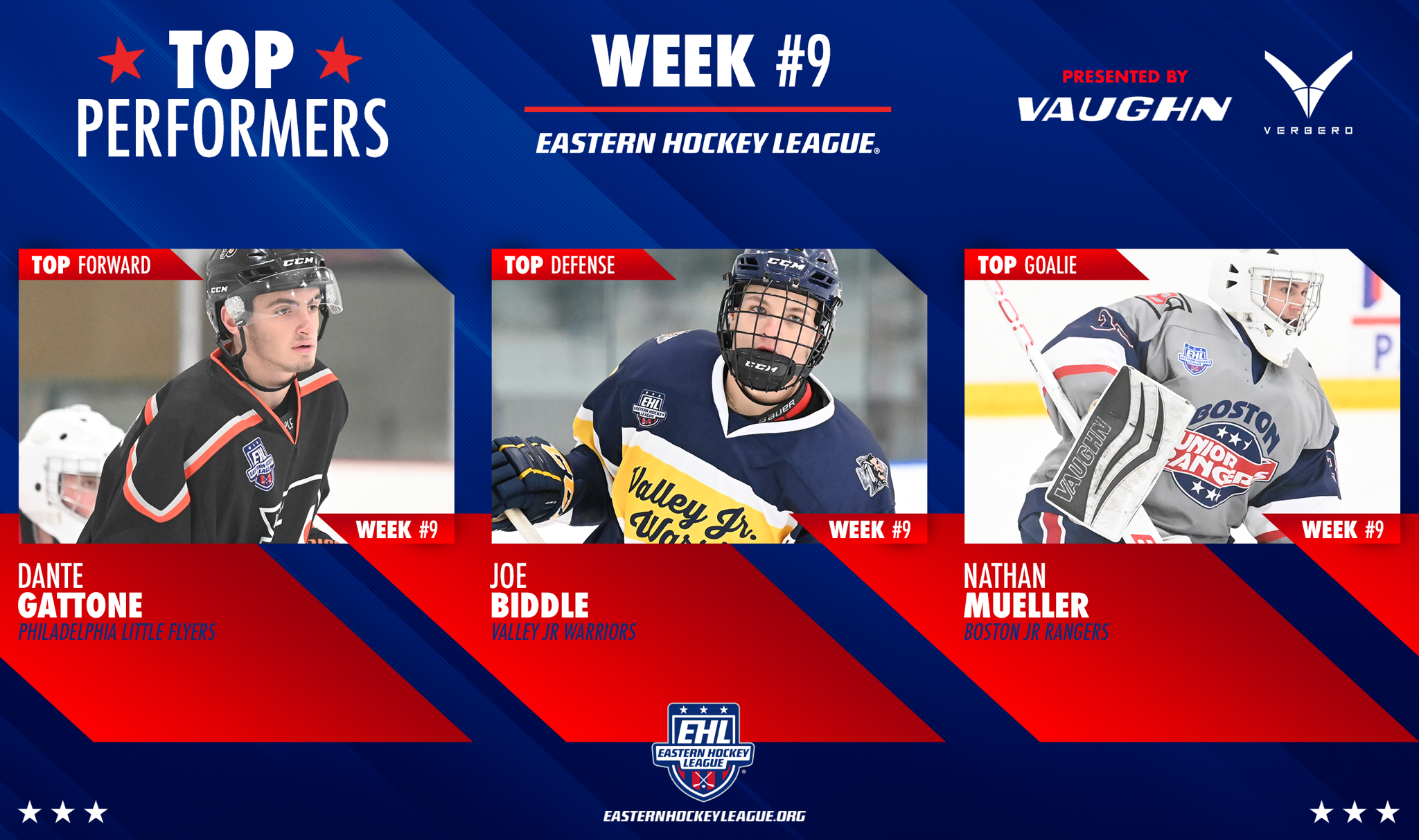 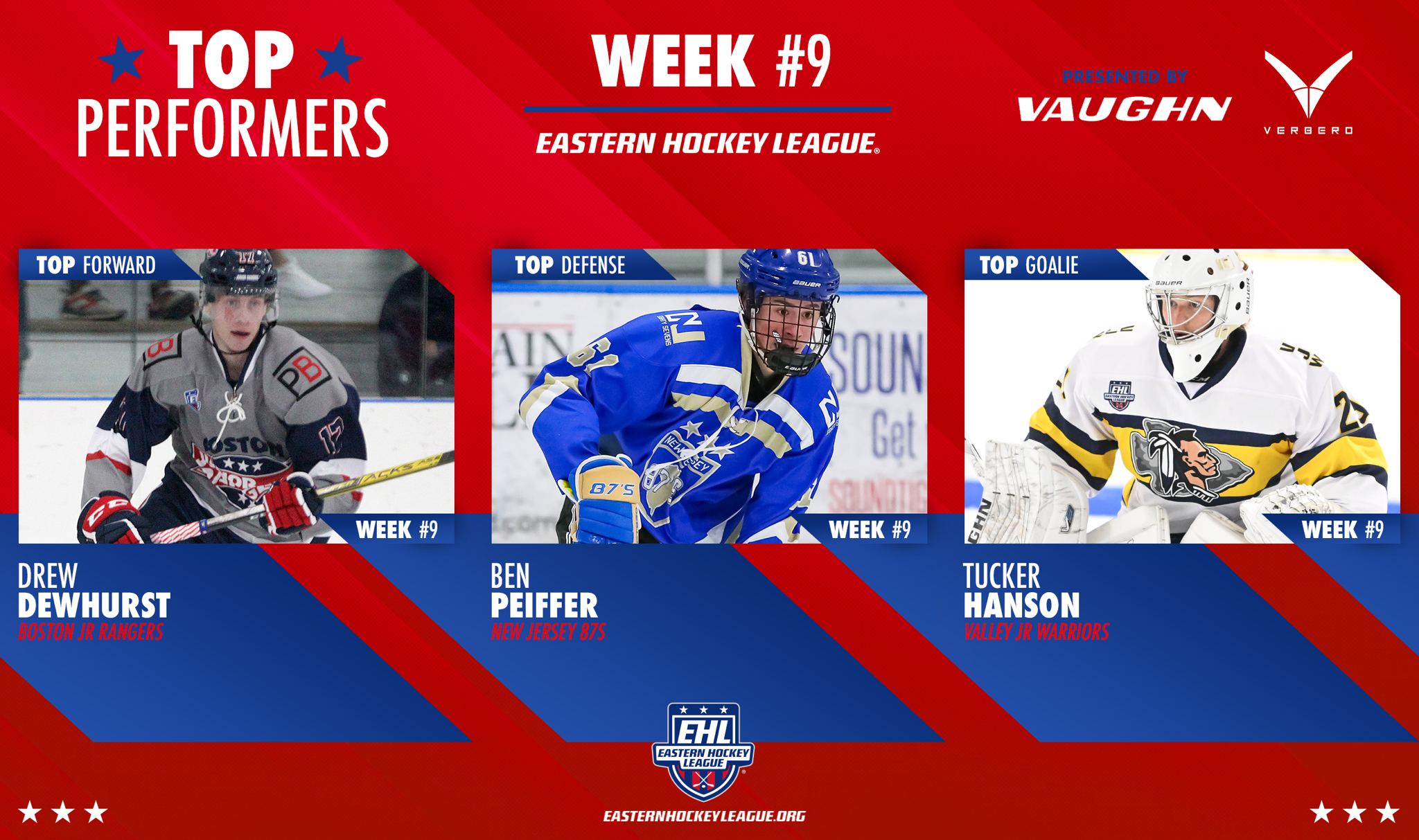