BOSTON, MA -- For the first time in league history, there will be a game played on Thanksgiving. This year, the annual holiday will feature a rivalry matchup in the Eastern Hockey League (EHL). The Seahawks Hockey Club is set to play host to the Walpole Express at 11:00 am, and the game will be streamed live and for free on HockeyTV. 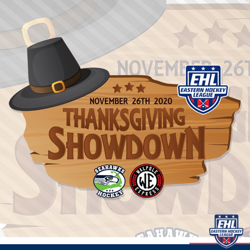 "To play on Thanksgiving, especially this season, is exciting for our players, as we are here together and thankful for the opportunity to play the game that we love," said Seahawks head coach and general manager Bill Zaniboni. "The EHL has done a great job with navigating through these times and keeping our players safety and advancement at the forefront."

Of the many headlines to watch out for in the game, one that stands out the most, points directly to Zaniboni and his counterpart for the Express, Cody Campbell. Campbell is the reigning Coach of the Year in the EHL, winning the honor a year after Zaniboni had done so himself. Just like Zaniboni, Campbell is excited about this year's special game.

"Playing on Thanksgiving is special," said Campbell. "To be a part of the first game the league has ever had on Thanksgiving makes it that much more meaningful. In a year that has tested everyone, our players are excited to have the opportunity to spend the day going to battle together and make the sacrifices we have all made to keep each other healthy throughout the season."

Since Campbell took over the helm in Walpole, the Express and Seahawks have faced off a total of five times, with tomorrow's matchup being the first of the 2020-21 season. In last year's five meetings, Walpole owned a slight 3-2 advantage over the Seahawks. All five matchups were close, with each team picking up a 3-0 shutout over their opponent. In the other three matchups, one game was decided by a two-goal margin, while the final two contests were each one-goal games.

The EHL is beyond pleased to be featuring a game on Thanksgiving this season, and hopes that you can tune in to watch what will surely be an entertaining matchup.