2017-18 Rookie of the Year Makes Division I Commitment

BEDFORD, MA -- Dylan Schuett, an alumni forward for the East Coast Wizards, has committed to Long Island University for the fall of 2021.

The 2000-born native of Alberta, Canada began his junior hockey career back in the 2017-18 season in the Eastern Hockey League (EHL). As a 16-year-old, Schuett played in 52 total games that year, scoring 33 goals and collecting 35 assists. Despite being the youngest player in the league, Schuett was amongst the league's leading scorers, playing alongside Devin Panzeca. While it was his linemate that earned Most Valuable Player honors, Schuett was unanimously selected as the league's Rookier of the Year.

"Dylan was such a good player for us that season," said Wizards head coach and general manager Kory Falite. "That was my second season serving as Freddy Meyer's assistant, and I just remember how dynamic of a duo Dylan and Devin were. Devin was an age-out player lined up with a true junior hockey rookie, but you never would have known. We were excited to help Dylan advance to the NAHL, and this Division I commitment comes as no surprise to me at all. Congrats to Dylan, I can't wait to watch what he does in the college ranks."

As Falite mentioned, you would have thought that Schuett was much older than he was, during his single season in the EHL. However, despite the youth, Schuett centered his line and never backed down from any opponent.

"My time in the EHL was the perfect introduction to Junior hockey," said Schuett. "Being 16 when I started in the league, playing Juniors was intimidating. With the help of some of the veteran teammates and the amazing staff with the Wizards, I not only developed as a player, but as a person as well. Many of the 97’s took me under their wing and guided me along the way. Freddy and Kory matured my game and taught me the importance of the small details that make a difference at the next level. Off the ice, Adrien increased my size and speed despite being in season, which helped me adapt to playing against much older and stronger players. My confidence increased as the season went on and I began to feel more comfortable at the junior level. When I played games in the NAHL that season, I was humbled by the experience and it only helped me in the rest of the season with the Wizards, and taught me what I needed to continue to improve on. Ultimately, the EHL prepared me for 3 more years of Junior hockey in the NAHL and was the necessary step in my career to reach my end goal of Division 1 college hockey. I can’t thank my teammates and coaches with the Wizards enough for their help in my development as a player and person and I’m excited for my future at Long Island University."

Schuett is the latest example of a player climbing the USA Hockey Ladder of Development onto college hockey, as the EHL has helped over 80 players work their way up to the North American Hockey League (NAHL) and the United States Hockey League (USHL).

Learn more about the Wizards on the team's official website, and check out the full 2020-21 NCAA commitment list. 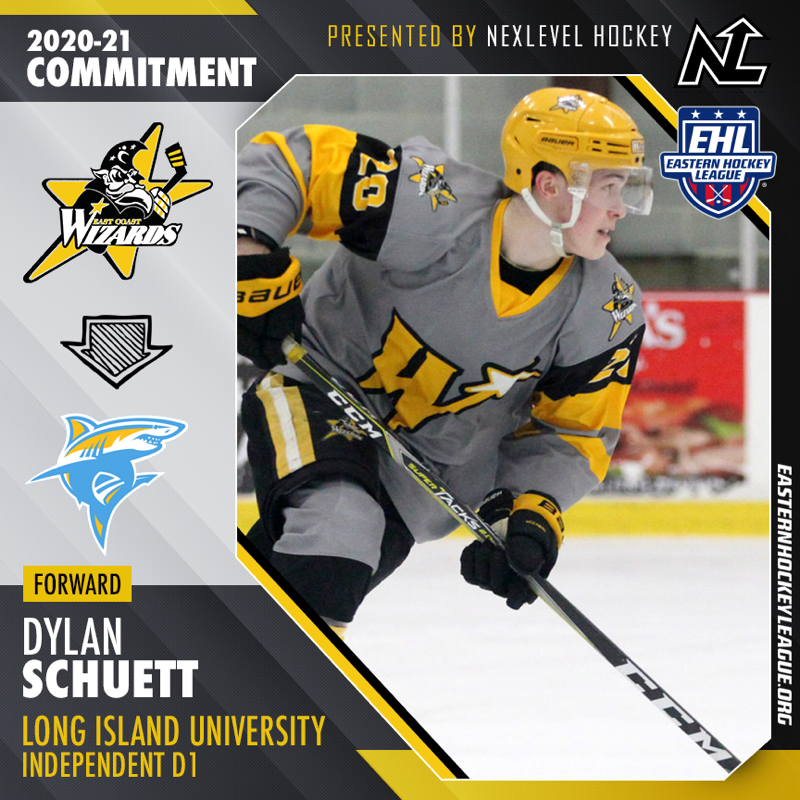