WALPOLE, MA -- Justin Sullivan, a forward for the Walpole Express, has committed to Gustavus Adolphus College for the fall of 2021.

The 2000-born native of Quincy, MA is in his second season in the Eastern Hockey League (EHL), and first with the Express. After posting 31 points in 46 total games last season with the Valley Jr Warriors, Sullivan headed to Walpole for his final year of junior hockey. To date this year, the talented playmaker is averaging just under a point per game, with eight goals and 14 assists through 24 contests.

"Justin has been an offensive threat for us all year long,” said Express head coach and general manager Cody Campbell. "He has also taken major steps in his play without the puck that has made him effective even if he isn’t producing points. We are thrilled for Justin as he has absolutely earned the opportunity he has to be a student-athlete at Gustavus.”

Sullivan is the latest in a steady line of Express players that have committed to the NCAA Division III program that plays out of the Minnesota Intercollegiate Athletic Conference (MIAC). Last season, there were three Express players that chose Gustavus Adolphus in Tim Lopez, Patrick McDonald, and Cole Cavey (current Walpole player committed for fall of 2021). Along with Sullivan from this season, Jake Galvin rounds the total up to five Walpole players that have chosen the Golden Gusties' program over the last two seasons.

“Academics have always come before hockey for me," said Sullivan. "So, when I was presented with the opportunity to go to such a prestigious academic school like Gustavus it really seemed like a no-brainer. As an athlete I know how much the coaches at Gustavus care about their players, and how hard they work to develop each player into the best that they can be."

Sullivan went on to talk about his decision to play for Campbell this year, and how grateful he is that it ultimately led to this moment.

"Playing for Coach Campbell and the Express has helped me reach my goal of playing college hockey in many different ways," added Sullivan. "He has given me the opportunity and the confidence to play to the best of my ability every time I touch the ice. Without his help I’m not sure where I would be as a player."

Sullivan was named an EHL All-Star back in mid-November, and he and his teammates have officially hit the break ranked as one of the top teams in the league with a record of 17-7-1. 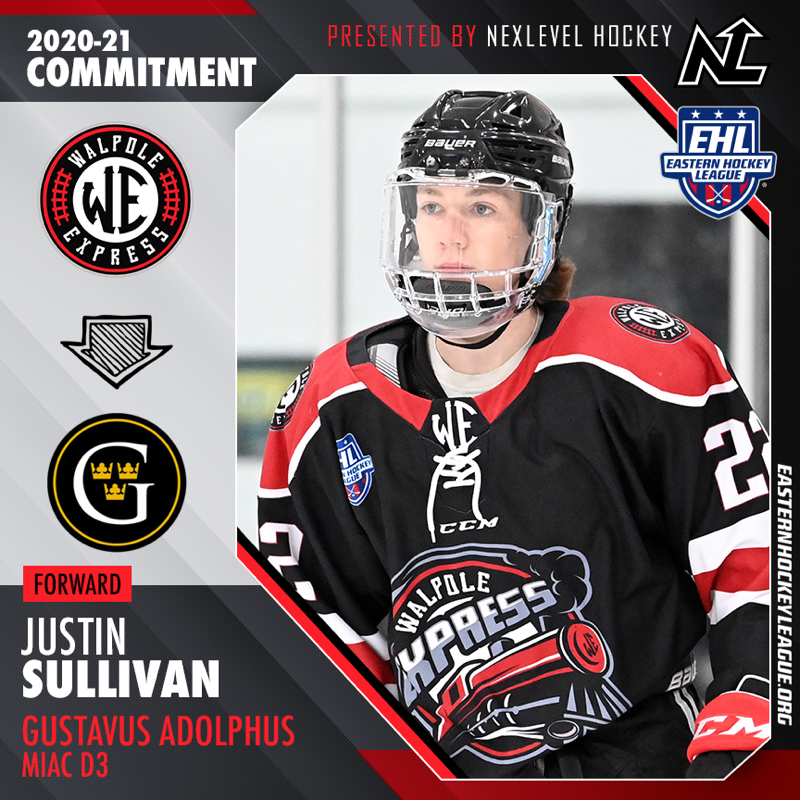