December Stars of the Month Presented By Vaughn and Verbero

Below you'll find the 4th set of monthly award winners in the #EShow. The forward and defenseman awards are presented by Verbero Hockey, while the goalie recognition comes courtesy of Vaughn Custom Sports.

The EHL is pleased to announce that Donnie Feldman (New England Wolves), Jack Johansen (East Coast Wizards), and Nathan Mueller (Boston Jr Rangers) have been named the December Stars of the Month.

Feldman and the Wolves posted a record of 4-2-0 in their six games that took place in December, and the team captain was an absolute force offensively. Feldman was held off the scoresheet just once over the course of the six games, but in the five remaining contests, he tallied at least two points in every matchup. Overall, the 2000-born native of Highland Falls, NY, finished the month of December with 13 total points.

For the season, Feldman now has 27 points in 20 total games, and the Wolves are right in the thick of things in the North Divison. New England will continue to lean on their leader down the stretch, with 18 games left on the regular season schedule.

Moving back to the blue line, and Johansen also wrapped things up with his best month of the season to date. After posting eight points in 15 total games stretching from September to November, the veteran defenseman put together a strong final month of the calendar year. The 2000-born native of Billerica, MA more than doubled his point production with 10 total points in nine games this past month.

For the season, Johansen now has 18 points in 24 games to date, putting the captain on a good pace to surpass the 26 total points he accumulated this past year. Staying similar to Feldman and the Wolves, Johansen and the Wizards also find themselves right in the middle of the standings, vying for playoff positioning in the Central Division.

Speaking of the Central, Mueller and the division-leading Rangers have made their case as the best team in the league so far this season. After losing their opener back in September, the defending Regular Season Champions posted a record of 19-1-0 in their next 20 contests leading up to the holiday break.

The near-perfect record includes five wins from the month of December, four of which were earned with Mueller between the pipes. At 12-1-0, Mueller is tied with George McMichael of the New Hampshire Avalanche for the league-lead in wins. As for his GAA and save percentage, Mueller stands alone at the top with respective marks of 1.54 and .952. Finally, Mueller is tied with McMichael again for the league-lead in shutouts (3).

This is Mueller's 2nd Star of the Month honor (October Goalie of the Month), as he looks to continue anchoring a program with the phrase 'Unfinished Business' plastered in their minds.

The EHL is pleased to announce that Conor Donovan (Railers Jr Hockey Club), Ben Peiffer (New Jersey 87s), and Logan Palmer (Boston Jr Rangers) have been named the December Stars of the Month.

Donovan and the Railers posted a record 4-2-0 in the month of the December, with the '01 native of Swampscott, MA leading the way offensively for his team. Donovan tallied at least a point in all six games, finishing the month with five goals and five assists to his credit. For the season, Donovan now has 18 points through 14 total games, and is riding a nine-game point streak into the 2nd half.

As for the Railers, the eight-point month solidified the team's grip on 2nd place in the Central Division standings. Donovan and the rest of his teammates will now look to remain consistent throughout the 2nd half, and into the upcoming postseason in March.

Peiffer and the 87's hit the ice for just a pair of games this past month, but that didn't slow the '03 down from notching a goal and three assists to his name. For the season, Peiffer is averaging just under a point per game, with 16 total points in 17 contests to date.

Peiffer and the 87's sit the top of the South Division standings and are ranked as the 3rd best team heading into the 2nd half of the season. The young defenseman will look to continue leading his team on the back-end, and into the playoffs, as the 87's make their push towards a division title and ticket to the Frozen Finals.

Palmer and the Rangers owned a mark of 5-0-1 this past month, with the 2nd year netminder standing tall for a trio of those victories. For the season, Palmer is now 8-0-2 and his 2.11 GAA and .924 save percentage rank him as one of the top goaltenders in the entire EHLP.

The Rangers have won three straight Regular Season Championships, and are playing like a top contender again this year, sitting at 14-1-4 in 19 total games to date. Action resumes for Palmer and his squad when they face-off against Donovan and the Railers on Friday, January 8th. 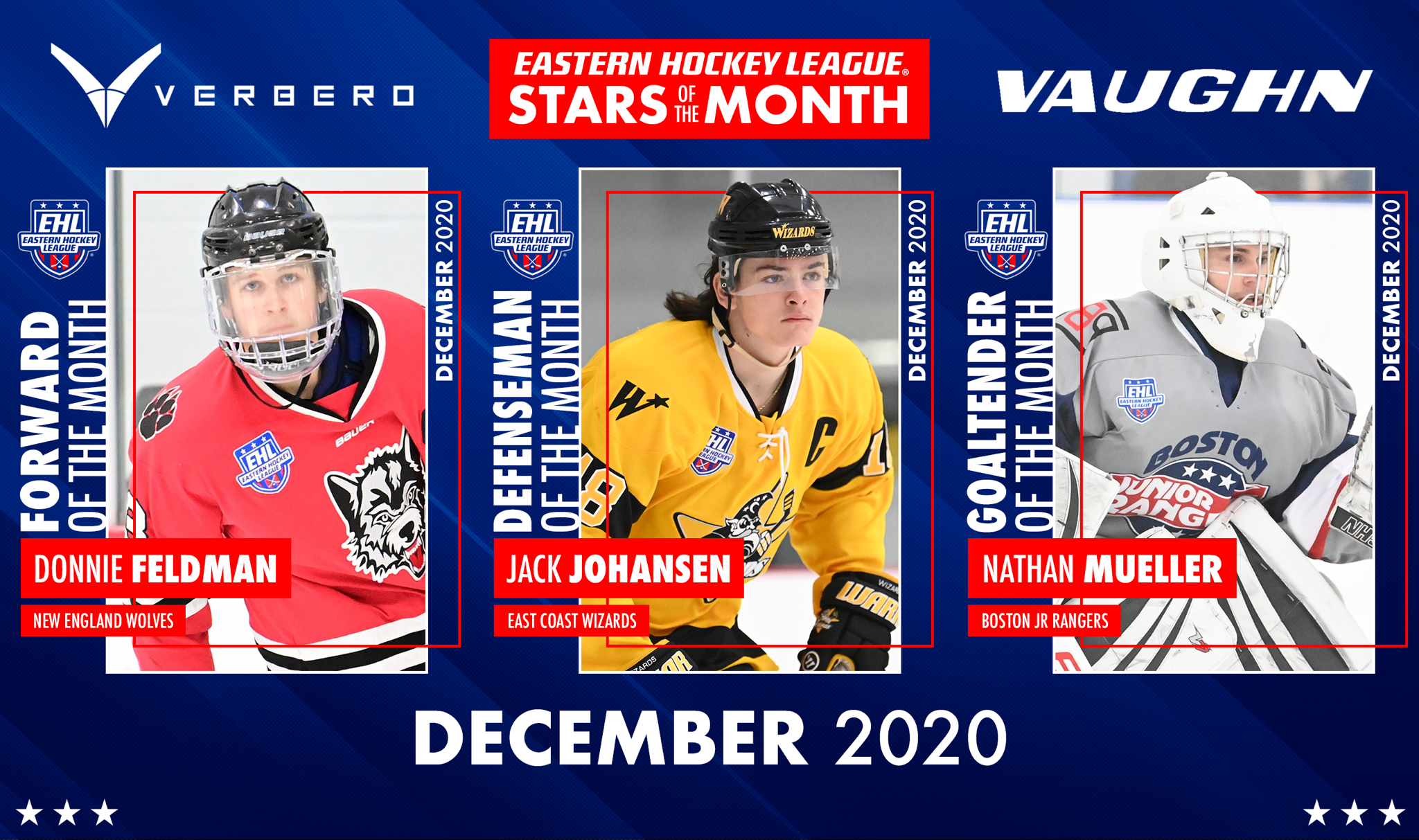 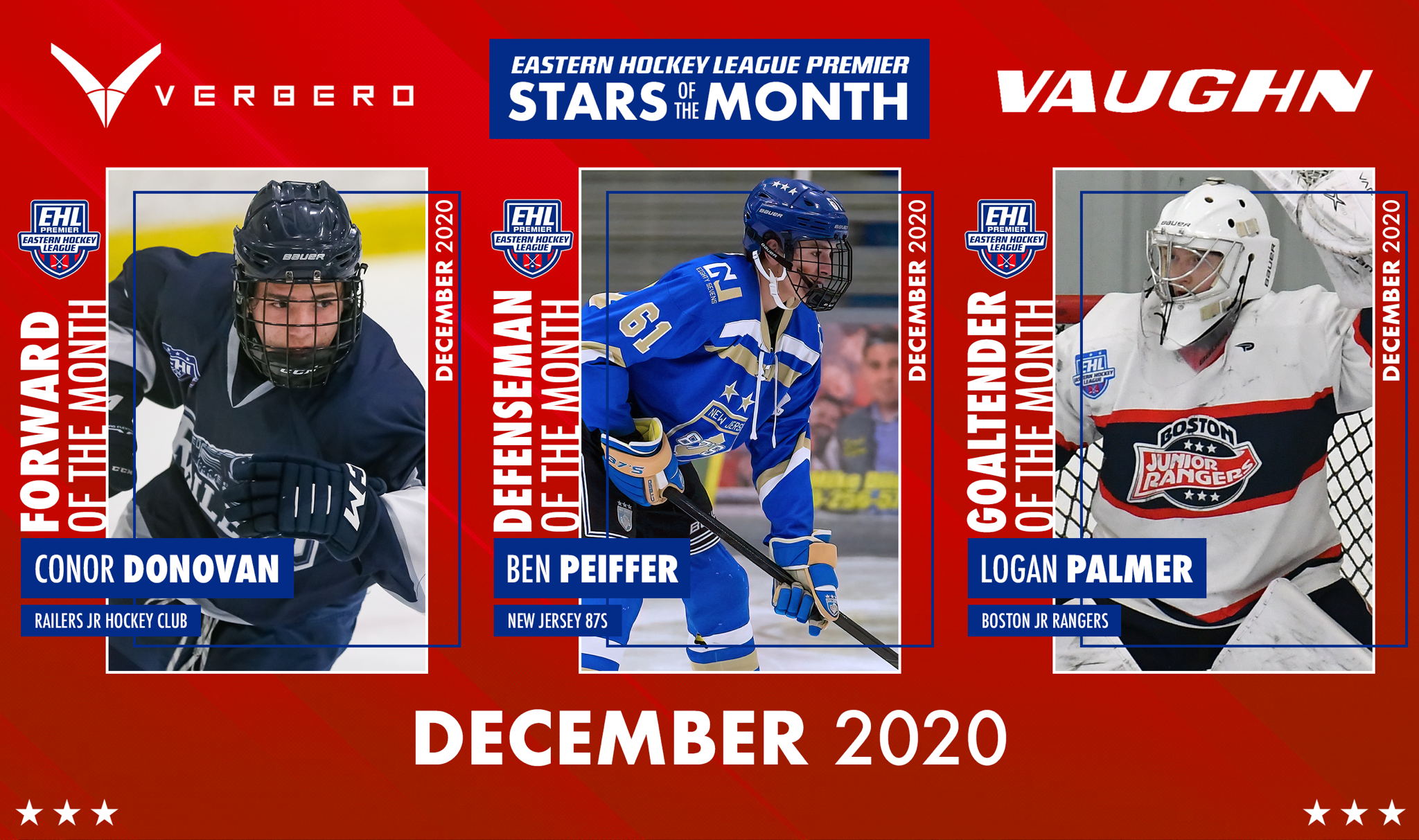