Road to the EHL: Brody Selman

SOMERSET, NJ -- It is no surprise that there are always obstacles for expansion teams at the Junior hockey levels. One ingredient and recipe for success with those types of organizations to excel is familiarity, believe it or not.

The Protec Jr. Ducks are the Eastern Hockey League’s (EHL) 2020-21 expansion squad, and Jr. Ducks forward Brody Selman not only shared his Road to the EHL, but why he’s an ideal fit for the new guys on the pond.

A Teammate Since Day #1

Selman, 20, is a twin brother who needed blood donated at birth due to complications. The adversity from ‘day one’ built a strong bond with Selman and his twin sibling, but over time potentially inspired his dedication towards leadership and the sport of hockey.

According to Selman’s mother, the twins were “born with hockey sticks in the incubator.”

When interviewed and asked about his youth hockey tenure, the Mahwah, NJ native always referred to his experiences with the pronoun “we”. The humble Selman laced up the skates in the Garden State with his twin for a number of years while the two dressed for teams like the North Jersey Avalanche and the New Jersey Hitmen at the higher levels.

Keep in mind that Selman’s older brother, Justin, skated in four seasons for the University of Michigan’s NCAA DI team. So, yes, Selman was born into a hockey culture while admiring his older brother skating alongside NHL caliber prospects. NHL skaters such as the Detroit Red Wings’ Dylan Larkin and Winnipeg Jets’ Kyle Connor were just two Wolverines that were close-knit with the Selman family, and the youngster often enjoyed watching them light the lamp at Michigan’s Yost Arena.

“I remember going to his [Justin] first game and Yost Ice Arena was packed, and you’re sitting there saying ‘hopefully I can do this one day.’ It was always a dream of mine to play college hockey.”

Prior to Selman’s Senior Year in High School in 2018, the left-handed shot received a tryout in Omaha, NE with Omaha “AAA” Hockey Club’s 18U team. Selman not only flew out west to Nebraska and pursued an admirable leap of faith but thrived with the program. It seemed that both the experience and exposure benefited the 5-foot-9 forward’s growth, overall.

“It was the best decision I’ve ever made,” said Selman. “I met life-long friends out there. We didn’t really have the best season, but we were ranked high for preseason polls, and it was awesome.”

Selman netted 20 goals and earned 25 helpers for 45 points in one season with Omaha – not bad, right? 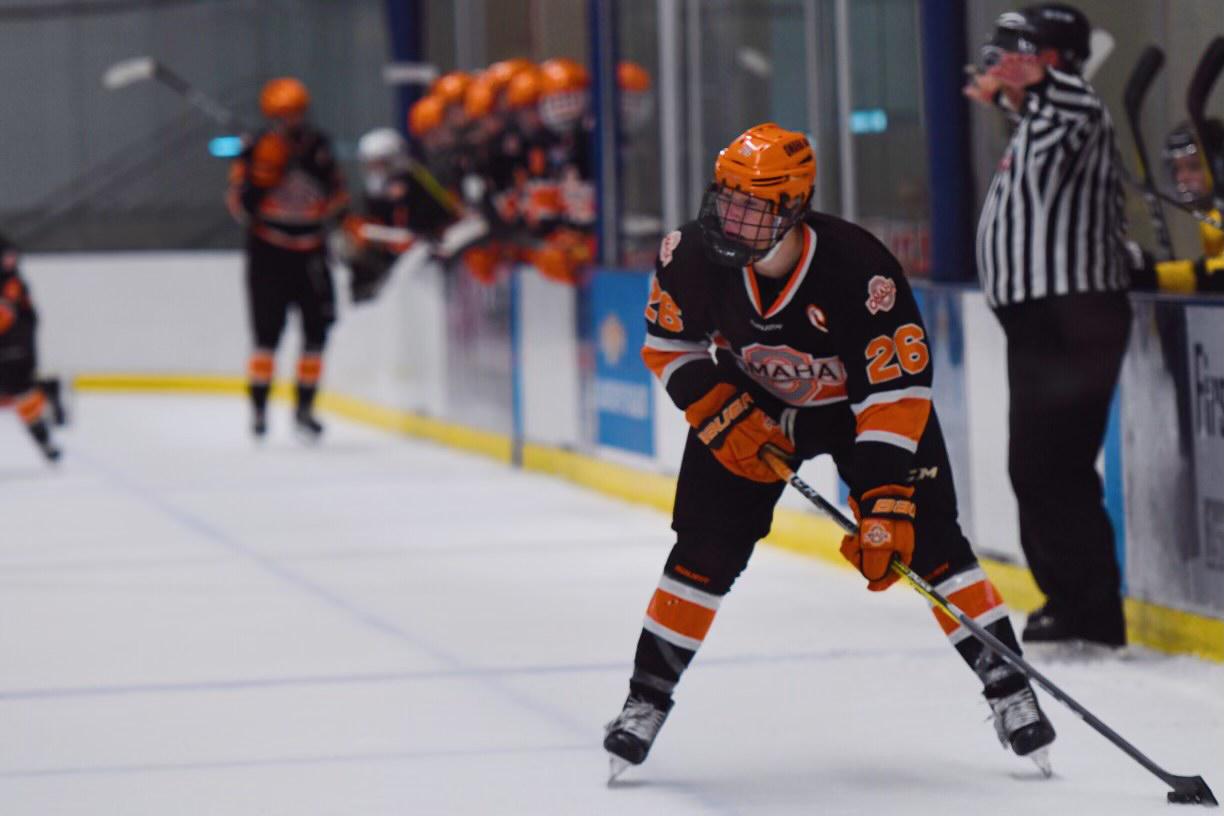 The native of New Jersey spent a season developing and serving as the captain of the Omaha AAA Hockey Club (18U). A total of 45 points in 52 games later, and Selman was ready to make the jump to juniors.

After spending time with Omaha, Selman and the expansion Jr. Ducks agreed to a contract during the 2020-21 offseason – it seemed like an ideal fit for both flocks.

“I mean, I’ve always been on teams that I thought required building a new identity,” said Selman. “And I was always brought in to help change the culture of a locker room and organization because I like to think of myself as a hard worker and try to rub that off on guys.”

“Because of Brody’s work ethic and dedication to the team, it was easy for our coaching staff to name him one of our team’s captains this year,” said Watt. “He simply does everything right. He competes every day in practice and in games. He’s doing the extra stuff off the ice every day, in the gym, extra ice time with our skills coach, going over video with our coaching staff, etc.”

There’s no doubt that Selman stands out and in a positive way on the ice for both the EHL and Protec. His skating abilities with and without the puck, plus Hockey IQ are apparent from puck drop.

After 14 games played, No. 8 leads the Jr. Ducks with six tallies and 11 helpers for 17 points on the year, but there’s more to just his skill sets at the Pond. 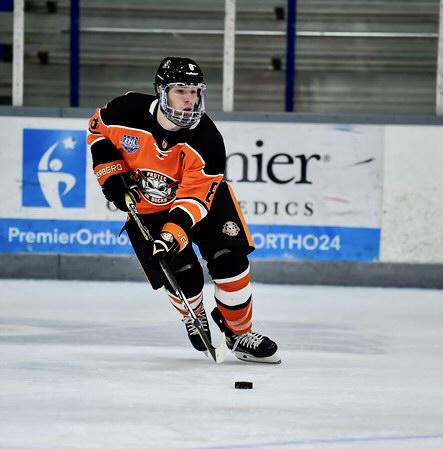 After 14 games played so far this season, Selman leads the Jr. Ducks with six tallies and 11 helpers for 17 points on the year. He is also still acting as a leader, repping an 'A' on his chest this season.

“Brody has earned everything he’s achieved because he puts the work in,” said Watt. “He is loved by his team and well respected by his coaches. As a coaching staff we use Brody in every situation during games and he is a well-rounded player with great hockey sense.”

While the New Jersey native has thrived with Protec, Selman admitted realities of joining a new club at the Junior “A” level.

“It’s been a challenge at times, but’s it’s also been a very cool experience and we’ve won games,” said Selman. “I honestly didn’t expect us to come out and be ‘quote-on-quote’ the best expansion team. Yet, when you sign with an expansion team, I would say it’s a risk, but the ‘risk’ is working out as of now.”

The Jr. Ducks enter Saturday, Jan. 9, with a 8-6-5 (21 points) record and are three points behind the third-placed ranked team for the South Division.

Away from the Rink

‘Working hard’ is easier said than done, but it’s apparent that Selman meets that expectation, especially given his background away from the rink.

“I actually had severe dyslexia growing up, so honestly nothing came easy to me with hockey and school,” said Selman. “I always had to work extremely hard at things, so I think in school they always placed us in music and theatre arts and I always liked the music.”

It’s fair to say that those obstacles not only inspired Selman to excel on the ice, but also discover new passions.

“I enjoyed music because it was a way ‘to get away’ from everything and if you sat there and practiced for 100 hours, well then you’re going to get better – just like anything else and in hockey.”

After Selman’s season ended in Omaha, he and a teammate would still wake up for up a 6:00 a.m. skate, workout off the ice and then go to school. Then, he saw a music institution on a drive back from the rink one day and thought ‘hey, let me pop my head in and just see how it is.’

“Let me tell you, as soon as I walked in there, I was like I had to sign up for lessons because I thought it was awesome."

So, yes, the Jr. Ducks leader is also a musician and eager to learn more in various aspects of life.

He originally gained interest in piano while watching his Grandmother play and he always enjoyed just sitting down and listening to her play, and thought, “hey I need to learn.”

Prior to returning to New Jersey, Selman wanted to challenge himself and learn a song on the piano without telling his family and perform in front of them once he returned. Thoughtful, right?

The chances are the hockey player’s piano debut went well. While the keyboard and hockey will always be there for Selman, playing in the EHL will expire. Still, the skater is embracing every moment in the league and with his fellow Jr. Ducks.

“I think the EHL has not only helped develop me on the ice as a player but in a leadership role, especially as a ‘2000.’ I can teach the younger guys what Junior hockey is all about and that the EHL is a development league to get kids to advance. I feel like it’s my job to teach the kids ‘like hey, there’s a lot of hockey in front of you and if you do ‘this and that’ then you have a shot.”

Selman plans on attending a four-year college after the 2020-21 season, while not only lacing up the skates for a new flock but studying business. Perhaps, he’ll find himself in a similar position after graduating and help jumpstart another new organization.