For all of their remaining organizations, their first respective games of 2021 will take place this week, and the push for the postseason is officially on.

Starting in the EHL, the top-ranked, Central Division-leading Boston Jr Rangers are one of the teams playing their first game of the 2nd half this upcoming week, as they travel to take on the Railers Jr Hockey Club tomorrow at 11:30 am. Following the matchup in Worcester, MA, the Rangers also have a pair of games scheduled against the #5 Western Mass Chiefs on Wednesday and Monday.

Coming in at #2, the New Jersey 87s kick-off the new calendar with four straight home games, including matchups against the Protec Jr Ducks (Wednesday) and the Connecticut RoughRiders (Friday) this upcoming week. New Jersey owns a comfortable cushion at the top of the South Division standings.

Continuing on with the #3 New Hampshire Avalanche, the 3rd and final team currently in 1st place in their division. Play resumes on Wednesday for the Avalanche, as they hit the ice at home against the New England Wolves. Following Wednesday's contest, the Avalanche will then face-off with their remaining North Division opponents (Seacoast Spartans and Lumberjacks Hockey Club), during the first two days of The Granite Cup on Sunday and Monday.

At #4, the Walpole Express are ready to pick up where they left off, when they host the Chiefs on Friday and Saturday night. The Express won a one-goal contest (5-4) over the Chiefs back on October 24th.

Closing out the rankings, the Chiefs have the hardest schedule of any team in the top-five, with the pair of matchups against two teams mentioned above, the Rangers and the Express. The four total games will take place over a six-day stretch.

Moving over to the EHLP, and the top-ranked New Hampshire Avalanche are ready to pick things up where they left off, as they stand at 13-1-0 to begin the 2nd half. This week's schedule includes a home matchup against the Lumberjacks Hockey Club on Thursday, and road date with the New England Wolves on Saturday.

At #2, the New Jersey 87s swept their two-game series with the New Jersey Renegades this past weekend, outscoring their South Division rival by a margin 16-2 over the weekend. The 87's will look to keep rolling when they travel to take on the Philadelphia Little Flyers on Friday, and match-up with the Renegades again on Saturday.

Behind the 87's, the #3 Railers Jr Hockey Club moved back inside the top-four after knocking off the Boston Jr Rangers on Friday, and the Western Mass Chiefs on Saturday. At 13-7-0, the Railers have won five straight games, dating back to a three-game sweep over the Walpole Express, just prior to the start of the holiday break. 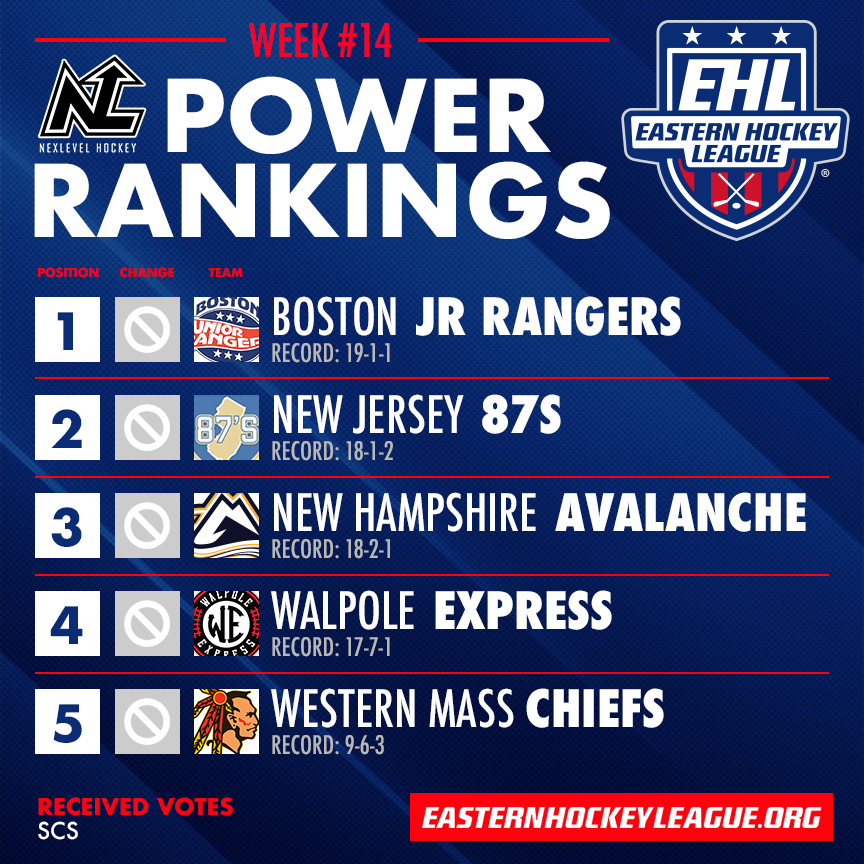 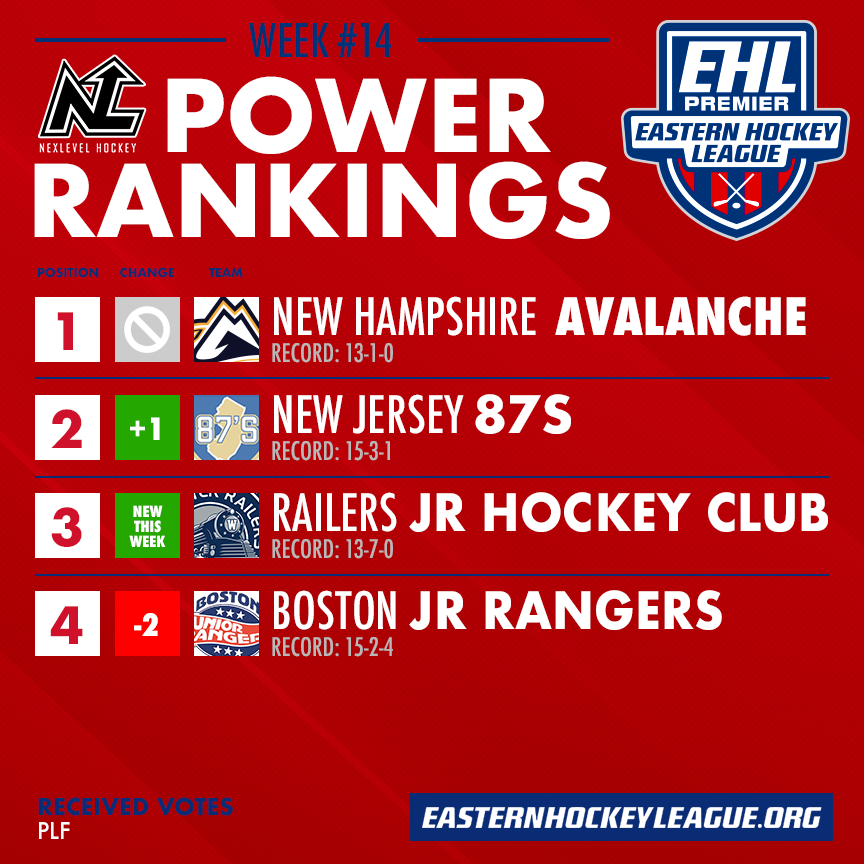