Spartans Move Back Inside the Top-Five

Kicking things off in the EHL, the Boston Jr Rangers remain the top-ranked team in the league, following a pair of wins over the Railers Jr Hockey Club (Tuesday) and Western Mass Chiefs (Wednesday). The Rangers outscored their opponents 16-5 in their first two games out of the holiday break, extending the team's winning streak out to 10 games. Coming up this week, the Rangers battle the Chiefs again this afternoon, and then travel to take on the Seahawks Hockey Club on Thursday and Friday.

Right behind the Rangers, the #2 New Jersey 87s maintained the one-point gap with the team at the top of the league standings. New Jersey also played two games in their return from the holiday break, beating the Protec Jr Ducks 6-4 on Wednesday and the Connecticut RoughRiders by the score of 6-2 on Friday. Looking forward, the 87's opponents don't change quite yet, with two more matchups this week against the RoughRiders (Wednesday and Friday), and a Sunday night showdown with the Ducks.

Despite dropping a 2-1 contest to the Seacoast Spartans yesterday afternoon, the New Hampshire Avalanche remained locked in at #3 with an overall record of 19-3-1. The Avalanche's lone victory of the week also featured a one-goal affair, with New Hampshire picking up a 4-3 overtime win against the New England Wolves on Wednesday.

Following suit at #4, the Walpole Express also suffered a loss this past week, by the score of 4-2 at the hands of the Chiefs on Friday night. However, Walpole quickly rebounded with a 6-4 comeback victory the very next day against the Chiefs. The Express sit in 2nd place in the Central Division, but more importantly, are ranked 4th overall in the league standings, which could prove to be very beneficial towards the at-large selection that will be added to the group of teams going to the EHL Frozen Finals.

Wrapping up the top-five, the Spartans victory over the Avalanche was their 5th in a row to start the 2nd half, propelling them back inside the top-five. Despite a sub-500 record at 12-13-3, Seacoast has quickly turned heads as a team primed to make some noise down the stretch and into the postseason.

As for the EHLP, the top-ranked New Hampshire Avalanche continue to cruise with a record of 15-1-0, which includes wins over both the Lumberjacks Hockey Club and the New England Wolves this past week.

Right behind the Avalanche, the #2 New Jersey 87s suffered an overtime loss (2-1) at the hands of the Philadelphia Little Flyers on Friday, but quickly rebounded with an emphatic 10-1 victory over the New Jersey Renegades on Saturday. Last week's pair of South Division road games are followed up with a pair of home games against the same two opponents this upcoming weekend.

At #3 and #4, the Railers Jr Hockey Club and Boston Jr Rangers are battling this morning, kicking-off a very busy week in the EHLP. Leading up to today's matchup, the Railers are coming off of wins over the Walpole Express and the Western Mass Chiefs, over the pass two days.

As for the Rangers, they enter the contest following a pair of wins over their own, against the Valley Jr Warriors and the Chiefs. 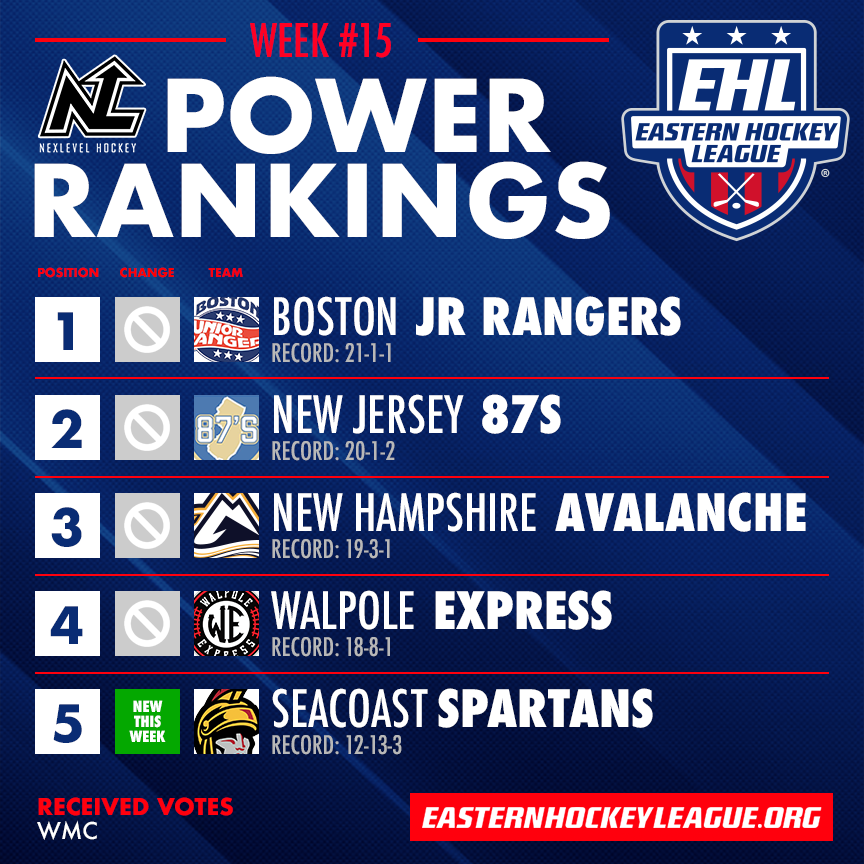 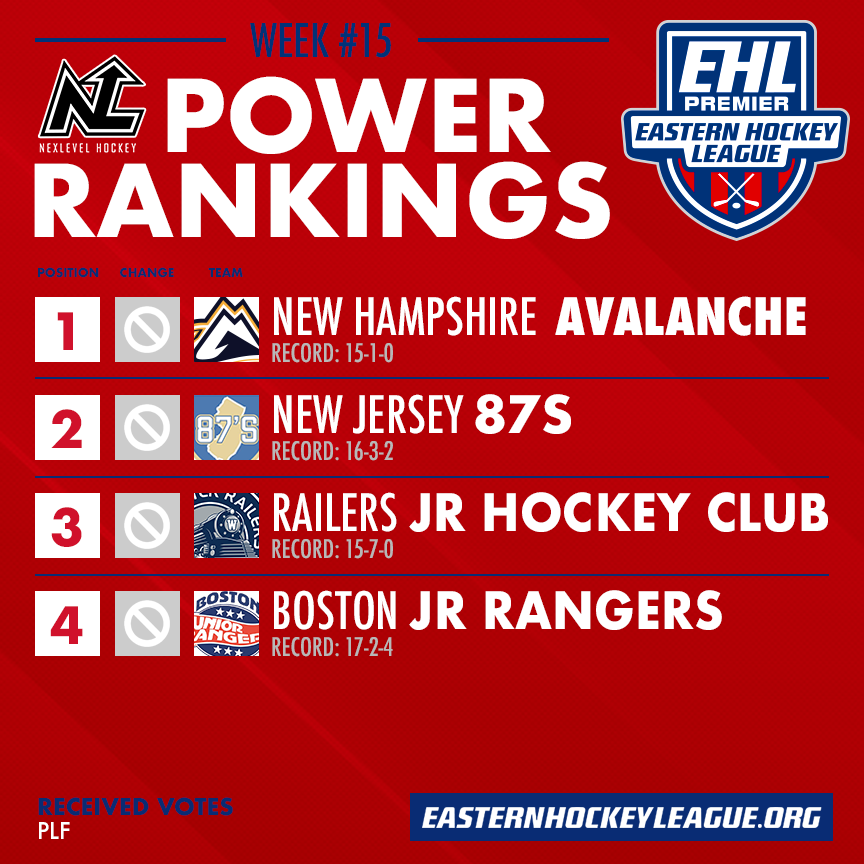