Giampapa Headlines Newest Set of Stars of the Week

Below you'll find the 15th set of weekly top performers in the #EShow. The forward and defenseman awards are presented by Verbero Hockey, while the goalie honors come courtesy of Vaughn Custom Sports.

The EHL is pleased to announce that Mikey Giampapa (Philadelphia Little Flyers), Dominic Chirico (Western Mass Chiefs), and Jakob Wepman (Seacoast Spartans) have been named the Top Performers for Week #15.

Giampapa and the Little Flyers returned from the holiday break with a pair of victories over Team Maryland on Friday and the Protec Jr Ducks on Monday. The 2000-born native of Ridley Park, PA led the way offensively for his team, scoring three goals and collecting four assists in the pair of games. Overall, the seven-point week doubled Giampapa's season total up to 14 total points in six games to date.

The 2018-19 EHL Forward of the Year has been a welcomed additional back to the Little Flyers lineup, and is a big reason why Philadelphia is feeling confident about securing one of two First Round playoff byes in the South Division. Coming up this week, the Little Flyers battle Maryland again tomorrow, looking to make it two in a row against their division rival.

Moving back to the point Chirico and the Chiefs had the toughest schedule of any team in the league this past week, facing off in a pair of games against both the top-ranked Boston Jr Rangers and the #4 Walpole Express. The Chiefs split the four games, and in the process, turned heads across the league.

The '01 native of Overland Park, KS played a huge role on the back-end, tallying five points throughout the week, including the game-winner against the Rangers yesterday. Coming up this week, Chirico and the Chiefs play host to the Valley Jr Warriors tomorrow, travel to face-off with the Railers Jr Hockey Club on Thursday, and take on the Express for another tough matchup on Sunday.

Wepman and the Spartans won both of their games this past week, stretching their winning streak out to five games since the team returned from the holiday break. A flip has definitely switched for Seacoast, as they ended 2020 on an eight-game losing streak. However, the hot stretch to start 2021 has the Spartans tied for the league-lead for the longest active winning streak.

As for the 2000-born native Studio City, CA, Wepman was in net for both victories over the Lumberjacks Hockey Club on Wednesday and the New Hampshire Avalanche on Sunday. The pair of victories were Wepman's 6th and 7th victories of the season, as he turned aside 63 of the 66 total shots that he faced. Wepman and the Spartans are right in the thick of things in the North Division, vying for the best seed they could possibly earn in the upcoming EHL Playoffs.

Sintiris and the Rangers won all three of their games this past week, outscoring their opponents 21-2 along the way. In total, the Rangers have scored 30 goals in five games since the team returned from the holiday break.

As for the '01 native of Andover, MA, Sintiris continued to produce, adding seven more points to his season totals this past week. Overall, Sintiris has 31 points in 22 games to date, and then includes 10 points so far in 2021. Coming up this week, the Rangers host the Western Mass Chiefs this afternoon, and travel to take on the Valley Jr Warriors on Sunday.

Damren and the Lumberjacks split their pair of games this past week, falling in a one-goal contest to New Hampshire Avalanche on Thursday, and then winning a one-goal affair over the New England Wolves on Friday. The '01 native of West Lebanon, NH notched three points in the victory on Friday, giving him eight points through 11 total games to date.

The Lumberjacks' captain is well on his way to setting new career highs this season, as he finished with 21, 15, and 8 respective points in each of the previous three years. This upcoming week puts the Lumberjacks back up against the Wolves and Avalanche, for a pair of games against each North Division rival.

Mattern and the Little Flyers won both of their games this past weekend, knocking off the #2 New Jersey 87s in overtime on Friday, and then beating the New Jersey Renegades on Sunday. The '03 native of Manahawkin, NJ earned the victory in each contest, turning aside 59 of the 62 total shots that were sent his way.

For the season, Mattern now owns a record of 7-3-0, to go along with a 2.97 GAA and .906 save percentage. The young netminder will be right back at it this week, with another matchup against the Renegades on Saturday, followed by a road showdown with the 87's on Sunday. 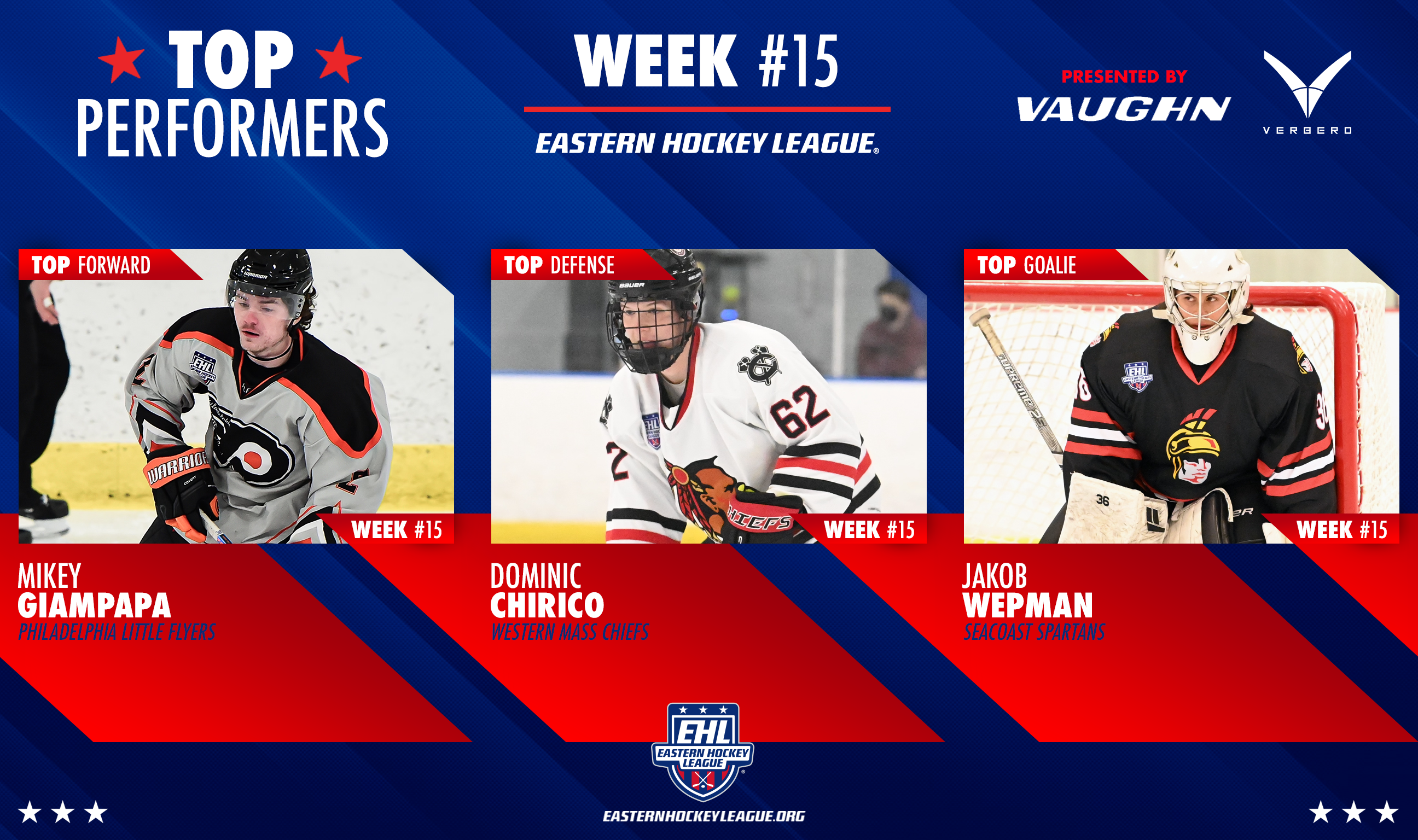 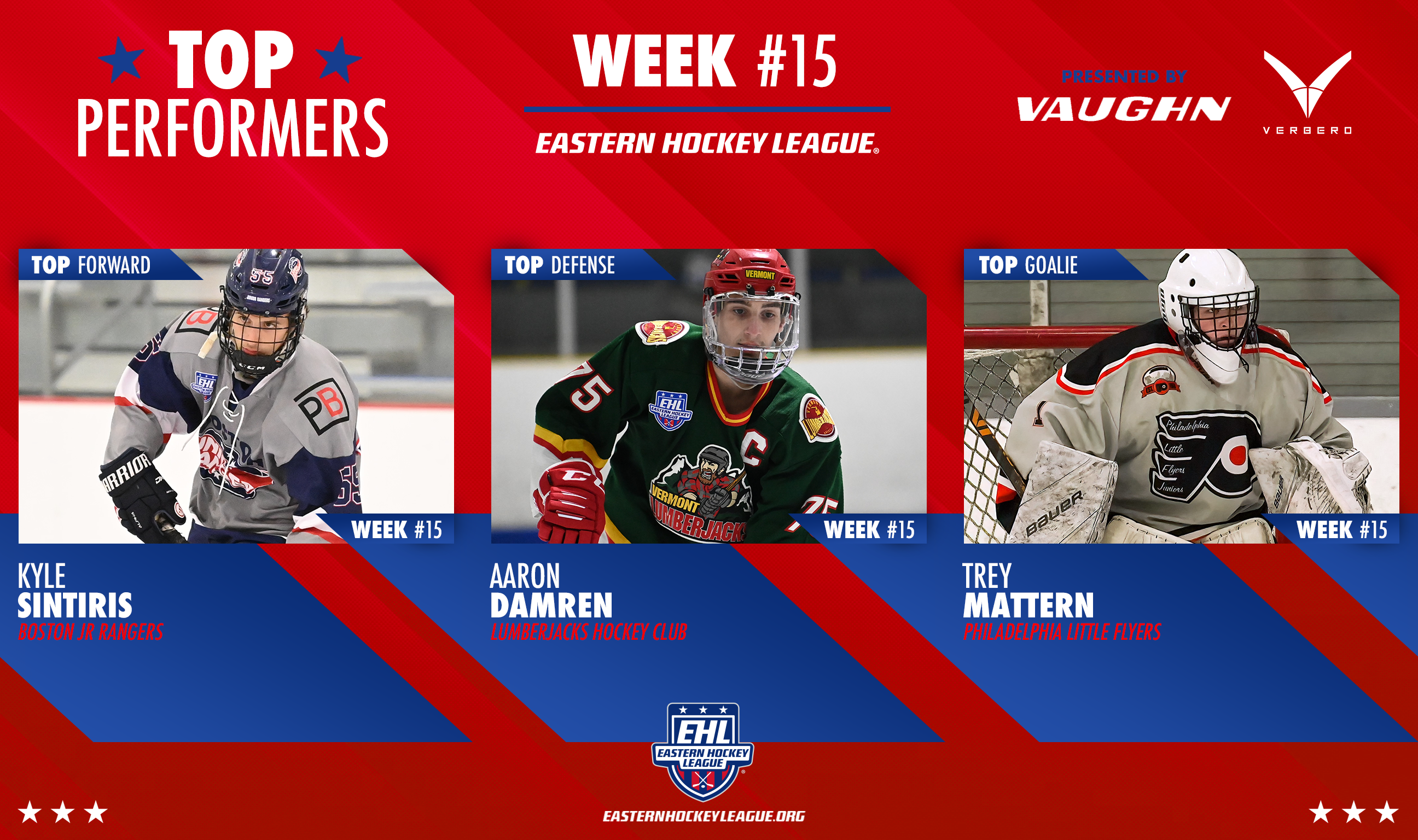