Davenport Shares His Battle Versus Cancer

Wizards Forward is Grateful to ‘Just Be Back’ with his Teammates

BEDFORD, MA -- At first, East Coast Wizards’ forward Keith Davenport thought a sudden pain in his left leg was a muscular injury. The first year Eastern Hockey League (EHL) skater later contacted his doctor after the pain persisted over the duration of summer 2020.

After seeing a physician, it seemed that Davenport’s ongoing issue was the result of muscle damage. 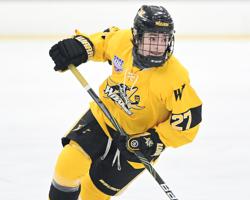 Through 16 games to date, the 2000-born forward has tallied five goals and seven assists to his name.

“I thought it was just a muscle issue and a result of a hard workout,” said Davenport. “Nothing was happening, and the season started. I was doing what I could and skating with the guys, but I didn’t know what was wrong with me.”

The root of the Princeton, MA native’s unexplainable pain wasn’t solved after an x-ray, either. Yet, doctors believed that a “bump” which appeared on his left femur, a bone located in your thigh, was something more serious than anticipated.

“That was the first time we saw the bump, and it was pretty scary,” said Davenport. “I had no idea that it was there and that it was on the bone.”

On that same day, Davenport entered Massachusetts General Hospital where he endured numerous scans and a biopsy was also performed.

The 20-year-old received unfortunate news that he likely had cancer.

“The results of the biopsy would determine my diagnosis and what type of cancer I was dealing with.”

The life-long hockey fan and player then waited two weeks before he received results on the biopsy, which entailed removing the tumor and a piece of the bone. One can imagine how nerve-wracking and painful that can be and in various aspects. Keep in mind that he couldn’t clear his mind by skating – the start of his “break from hockey” initiated during the waiting period.

Davenport was then officially diagnosed with a rare form of cancer.

Per National Cancer Institute, the disease is often “found on skin or bone” and “can damage tissues.”

Yet, what was next for Davenport away from the rink and with his health?

While the 2000-born spent over one month away from the rink, Davenport was given three options to battle the disease. He could have chosen the routes of chemotherapy, surgery, a Zoledronic acid IV, or hang up the skates and stop playing competitive hockey.

He acknowledged all the circumstances and the risk of playing but considering that he’ll age out this year from Junior hockey – Davenport chose to try and play while utilizing the IV once a month, which helps remodel the bone.

“You know, compared to other patients my battle is not as bad,” said Davenport. “I’m not doing chemo, right? My battle isn’t as intense as other people who have bone or any type of cancer for that matter.”

During his recovery and first steps towards battling the disease Davenport expressed how painful his left leg was after the biopsy. Also, the thought of “uncertainty” moving forward.

“We didn’t know if it was safe to play because the type of cancer is extremely rare,” said Davenport.

The doctors told the skater that “it’s reasonable to assume you’re the first hockey player that’s had to deal with this,” and that he can, “try and play and find out or stop playing,” eventually.

The Wizards’ forward followed his gut and desire to play.

“When I first returned to play, I was really scared to do everything,” said Davenport. “I didn’t want to take a puck [block a shot]. I didn’t want to get hit. The integrity of the bone was damaged, and it just wasn’t as strong and at an increased risk for fracture.”

Perhaps other athletes can relate to Davenport, and in the sense that not every tough return and battle falls on the shoulders of themselves.

“It’s been fantastic,” said Davenport. “My teammates have been amazing and have done so much for me.”

Let’s not forget that he was new to the team this year.

“Especially when I wasn’t playing, the guys were with me one thousand percent – I can’t say enough about Kory and Chris [coaching staff], all my teammates. They have just been with me every step of the way. I can’t tell you what that’s meant to me.”

While returning to the ice “made all the difference in the world,” Davenport also expressed a new perspective. He experienced a “phase” and thought process that he might not return to the ice again or how his life would change. Now, he’s more grateful than ever to be in the locker room at the rink for practices and games.

“My favorite part is being on a team and especially the Wizards,” said Davenport. “I hope what they’re seeing is to not take any moment for granted when you’re in the locker room or around the guys. It’s really a special thing to be a part of a hockey team. It’s different than most sports.”

How did Davenport join the Wizards?

His brother, Chase, skated in 83 regular-season games with the Wizards from 2016 until 2018 and “loved every minute” of his experience with East Coast. For the record, Chase committed to Assumption University, which skates at the NCAA DII level out of the NE10 Conference.

What’s interesting is that Keith also committed to an NCAA DIII program. The younger Davenport brother is set to join the Nazareth Golden Flyers next fall, who skate out of the United Collegiate Hockey Conference (UCHC).

The chances are that Davenport will enjoy and embrace his new hockey adventure in 2021-22.

“You get really close with your teammates and I’m just really thankful to have that opportunity, especially when I thought it might have been taken away from me.”