Lumberjacks Jump Back Inside the Top-Five

Starting in the EHL, the top-ranked New Jersey 87s remained red-hot this past week, earning victories over the Philadelphia Little Flyers on Wednesday and the New York Apple Core on Friday. At 25-1-2, the 87's became the first team to lock up a #1 seed when they clinched the South Division crown on Friday. Riding a 10-game winning streak, New Jersey now preps for a three-game week, with a matchup against the Apple Core on Wednesday, followed by a home-and-home series with the Protec Jr Ducks on Friday and Sunday.

At #2, the Walpole Express climbed their way up to their highest ranking of the season, following a 4-2 victory over the Valley Jr Warriors on Wednesday. The Express are riding a four-game winning streak of their own, heading into a week that includes a rivalry matchup with the Seahawks Hockey Club, and a home-and-home series with the #3 Boston Jr Rangers.

The Rangers fell back a spot in the rankings following a 3-2 loss last night at the hands of the Warriors. It was the 2nd game in as many nights decided by a single goal with Valley, as the Rangers came away victorious in overtime on Saturday. At 25-3-1, the Rangers still lead the way in the Central Division, as they push to follow suit with the 87's, and lock up the #1 seed in the postseason.

The New Hampshire Avalanche remained locked in at #4 following a 1-1-0 week that included a 5-1 victory over the Seacoast Spartans, and a 4-2 loss to the #5 Lumberjacks Hockey Club. Just like the 87's and the Rangers do in their respective divisions, the Avalanche sit at the top of the North Division standings with a mark of 22-5-1.

Speaking of the North, the Lumberjacks climbed back inside the top-five after a week that included victories over all three of their divisional opponents. The perfect week improved the team's record up to 12-11-0 for the season, as the Lumberjacks continue to battle with the Spartans and the New England Wolves for playoff positioning.

Moving down to the EHLP, the top-ranked New Hampshire Avalanche continue to set the pace, as a three-win week stretched the team's winning streak out to nine games and improved their record up to 21-1-0 for the season. The Avalanche have not lost a game since December 15th, and will look to maintain their consistency throughout the final 14 games of the regular season.

Speaking of lengthy streaks, the #2 New Jersey 87s stretched their winning streak out to five games and their point streak out to 15 games, with a two-game sweep of the Philadelphia Little Flyers on Saturday. However, the New Jersey Renegades spoiled the weekend for the 87's when they traveled to the Jersey Shore on Sunday and earned a 4-2 victory over their bitter rival. At 20-4-2, the 87's are following a similar pattern to their EHL team, as they work to close in on clinching the #1 seed in the South Division.

Moving back up to #3, the Boston Jr Rangers earned some revenge on Saturday, shutting out the Valley Jr Warriors by the final score of 3-0. At 21-3-4, the Rangers own a commanding 14-point lead over the #4 Railers Jr Hockey Club for the top spot in the Central Division standings.

Speaking of the Railers, the weekend began in strong fashion when they earned an 8-2 victory over the Western Mass Chiefs on Saturday. However, the weekend then became a split following a 3-1 loss yesterday afternoon against the Walpole Express. 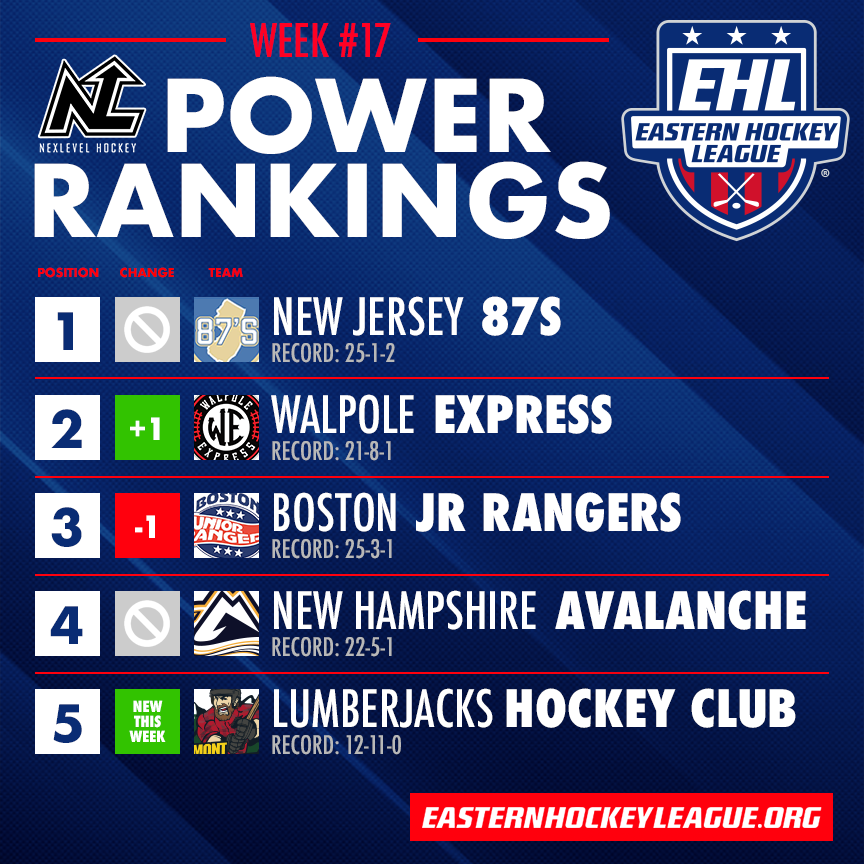 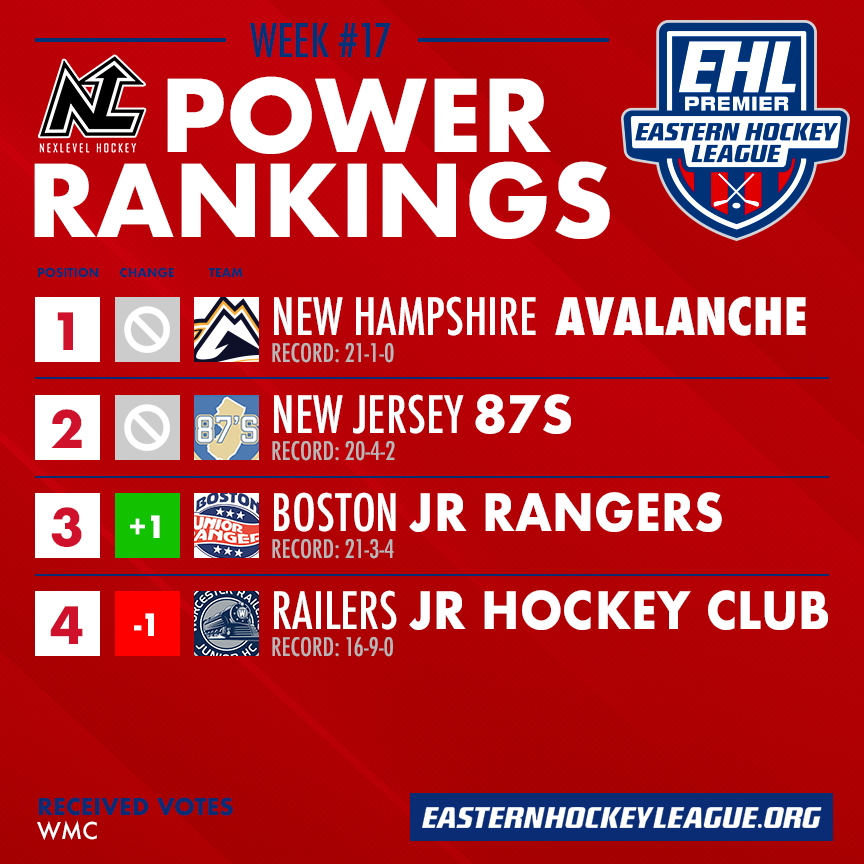