Wolves Hot Streak Propels New England Back Inside the Top-Five

Starting in the EHL, the New Jersey 87s maintained their grip on the #1 overall ranking despite suffering a shootout loss at the hands of Team Maryland on Friday. After kicking off the week with a 5-2 victory over the Protec Jr Ducks this past Monday, Maryland knocked off the 87's for the 2nd time this season in extra time. Despite the loss, the 87's still earned a point and currently own the best record in the league at 28-1-3. Coming up this week, New Jersey will host the in-state rival Ducks on Wednesday, and then travel up to Brewster, NY for a pair of matchups with the New York Apple Core on Friday and Sunday.

At #2, the Walpole Express currently own the largest active winning streak in the league at seven games. Included in that streak were a trio of victories, knocking off the Western Mass Chiefs by the score of 5-2 on Wednesday, the East Coast Wizards by the score of 7-3 on Thursday, and shutting out the #3 Boston Jr Rangers 4-0 yesterday. At 24-8-1, the Express are playing their best hockey at the perfect time of the year.

Speaking of the #3 Rangers, the weekend began in emphatic fashion when Nathan Mueller picked up his league-leading 5th shutout of the season over the Chiefs on Saturday night (7-0). However, as we just mentioned, the weekend was spoiled by last night's loss to the Express. Looking forward to this week, the Rangers will look to clinch the top seed in the Central Division with matchups scheduled against the Railers Jr Hockey Club and the Express.

Moving down to #4, it was also an up-and-down week for the New Hampshire Avalanche. After dropping their 2nd straight game to the #5 New England Wolves on Friday, the Avalanche were able to bounce back with a 3-0 victory over the Seacoast Spartans yesterday. With the victory, New Hampshire also officially clinched the top seed in the upcoming North Division playoffs.

Speaking of the Wolves, and speaking of hot teams, New England is right behind the Express, riding a five-game winning streak of their own. The recent stretch has improved the Wolves overall record up to 17-11-3 for the season, and what's most notable about their play is the rate at which they are scoring, as they are averaging just over five goals per game in the month of February.

Shifting down to the EHLP, and the top-ranked team at this level also suffered a loss this past week. The #1 New Hampshire Avalanche saw their 10-game winning streak snapped last Monday when they were shutout 4-0 by the Lumberjacks Hockey Club. However, the Avalanche quickly recovered from the defeat, beating the Lumberjacks by scores of 2-1 on Thursday and 5-4 (OT) on Saturday.

At #2, the Boston Jr Rangers moved their way up following a perfect weekend with wins over the Valley Jr Warriors on Friday, the Western Mass Chiefs on Saturday, and the Railers Jr Hockey Club on Sunday. The perfect weekend also led to the Rangers officially clinching the top seed in the upcoming Central Division playoffs.

Dropping back to #3, the New Jersey 87s lost their 2nd straight game, when they fell to the #4 Philadelphia Little Flyers yesterday afternoon in Aston, PA. Despite the loss, the 87's continue to set the pace at the top of the South Division, with a record of 20-5-2.

Wrapping things up, the Little Flyers home victory over their rival yesterday stretched the team's active winning streak out to three games. At this point of the season, we appear destined for an 87's-Little Flyers final in the South, with a trip to the EHL Frozen Finals on the line. 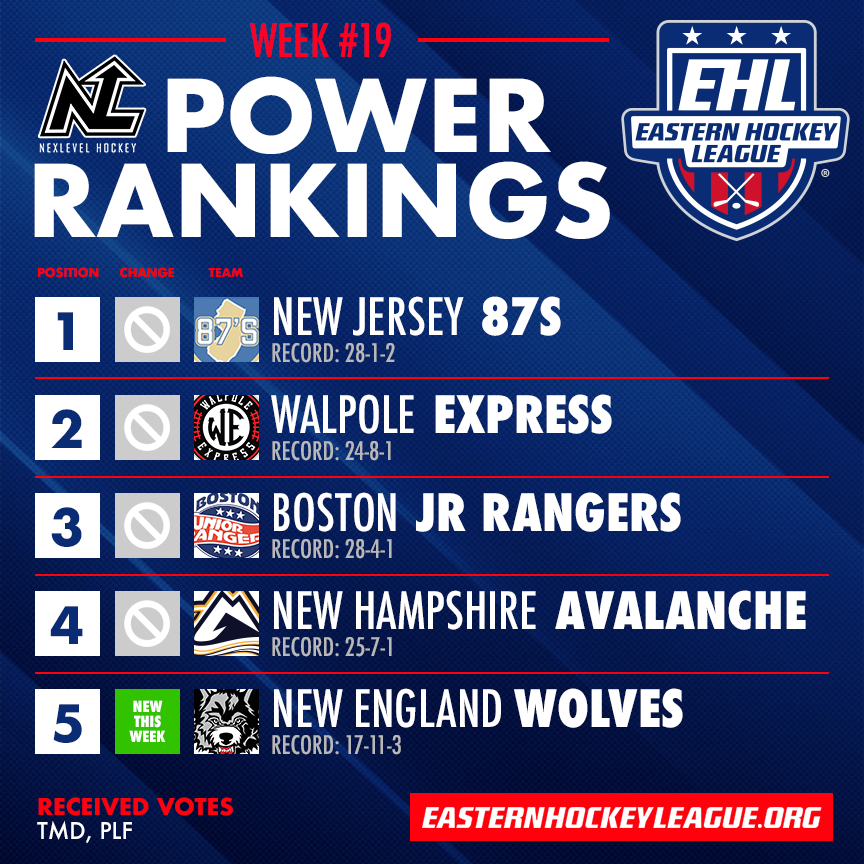 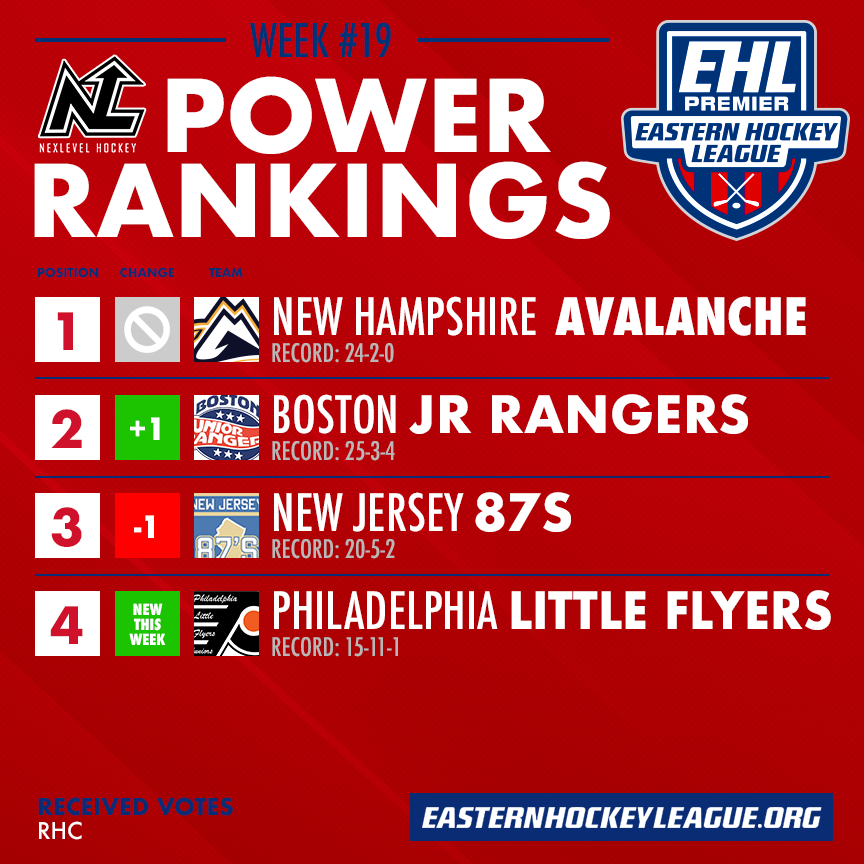