WALL TOWNSHIP, NJ -- George Weiner, a defenseman for the New Jersey 87's, has committed to the Wentworth Institute of Technology for the fall of 2021.

The 2000-born native of Wayne, NJ is in his 2nd season with the 87's, and in 71 career games in the Eastern Hockey League (EHL), Weiner has tallied 55 total points to his name.

"It's a great fit for Georgie; it's a great school academically and it's a great spot that Georgie wanted to be around," said 87's head coach and general manager Adam Houli. "The program is very very good, so it's just a good fit for George. When it came in that they were finally ready to take him, it was super exciting. He's been here for two years; he's really bought into the process and he really trusted us as a staff. He was one of the first kids to come back right after we shut down last year, and he wanted to get going right away. He wanted the guys to get going, so he's really lived that mantra of finishing the job. For him personally, he's finished the job and got to where he's got to with hard work and doing it the right way."

Towards the beginning of this season, Weiner was named an EHL All-Star, and he's proved to be worthy of that recognition with the point production that he's displayed throughout the year. After posting 24 total points this past season, the 87's leader on the back end has already tallied 31 points so far this season. Overall, Weiner is very proud of the time spent in the EHL, as it ultimately led to this moment.

"It means a lot to me, playing college hockey is something I dreamed about as a kid," said Weiner. "It's also nice to have that weight off my shoulders at this point in the season and be able to put all my focus into our team and winning."

Weiner went on to talk about the 87's program and everything he gained from his time with the organization.

"They have helped my development tremendously," added Weiner. "Coming to the 87's was the best thing that could've happened to me. [Adam] Houli and Matty [Kiernan] have given me more than enough opportunities to succeed. They're very smart and know the game well, and when you listen to them, it makes the game easy."

Weiner and the 87's have already clinched the top seed in the South Division, and they now have their eyes set on claiming their first-ever EHL Regular Season Championship. This would be the next step in the team's journey of trying to reach the EHL Frozen Finals for the first time in program history. 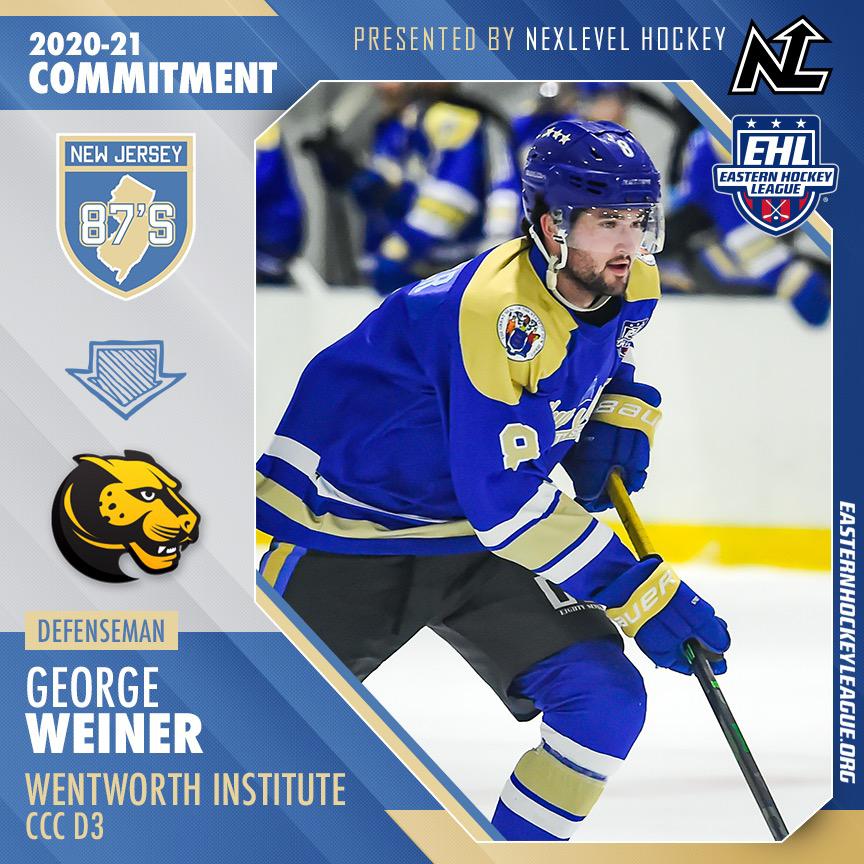