WALL TOWNSHIP, NJ -- Kei Yasuda, a forward for the New Jersey 87's, has committed to Connecticut College for the fall of 2021.

The 2000-born native of Japan is in his 3rd season in the Eastern Hockey League (EHL), and first full year with the 87's. Throughout his career in the EHL, Yasuda has played in 82 total games, tallying 104 points along the way. Included in that total are 56 points so far this season, which ranks Yasuda at the very top of the EHL scoring charts.

"It's awesome that Kei has been able to land at the school he wanted from the start," said 87's head coach and general manager Adam Houli. "He has worked extremely hard to put himself in a position to be successful and was laser focused in his preparation. I am very happy for him to reach his goal. When Kei first became an 87, his confidence seemed off and he was not where he needed to be. He was able to get his feet wet with us and through our talks we were able to get him going in the right direction. He was extremely focused and willing to do anything in the off season to prepare for the upcoming year and it showed from day one. He adapted and quickly developed into the player he is now. His preparation and focus on development is a clear example of succeeding when the hard work is put in. I am very proud of him."

Being from Japan, Yasuda has followed his own very unique Road to the EHL, that will now take him back to Connecticut this fall. While Yasuda goes in the books as the first-ever 87's player to choose the Camels hockey program, he's also the 16th player to do so in league history. With his commitment, the EHL extends its streak to a perfect eight for eight, in placing at least one player per year to Connecticut College since the league was formed back in 2013.

The 20-year-old forward added that his commitment can allow him to focus on the rest of the 87's season, with the EHL Playoffs getting underway in the beginning of March.

"It’s obviously nice to have that weight off my shoulders, but this isn’t over yet," added the EHL All-Star forward. "We have the playoffs coming up and I strongly believe it is very important for me to help the 87’s to be the championship team, then make my next step."

Yasuda also talked about his development in his two seasons with the 87's, and how he was able to work on his game to better prepare himself for the Division III level.

"I want to thank Coach Houli and Coach Matty for always pushing me to my full potential and preparing me for college hockey," concluded Yasuda. "They always treat us professionally, both on and off the ice, and I like how they care about all the details. Obviously winning is important, but it was clear that players’ development comes first for them. It was easy for me to trust the program and thrive to my full potential because I knew they would get me to wherever I want to go if I listened to them. I have no doubt that the 87’s is the best program in this league and I am glad that I chose to play here." 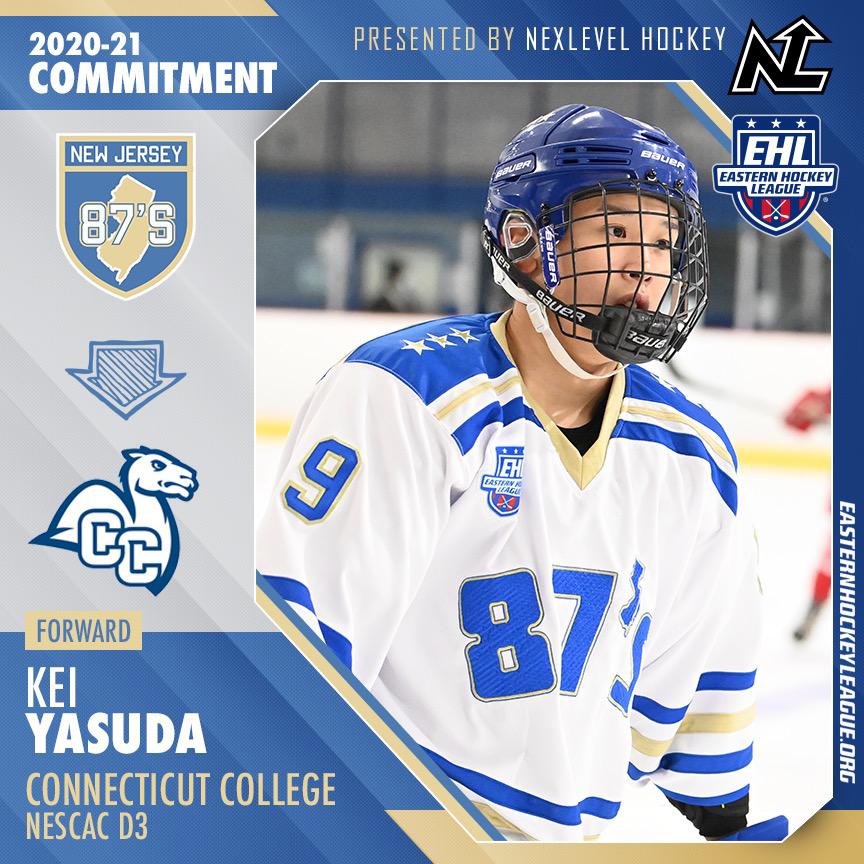