Avalanche Enter Postseason as Favorite in the EHLP

In the EHL, the Central Division showcased the only EHLP Playoff game of the week, as the Valley Jr Warriors beat the Western Mass Chiefs in a double-overtime thriller on Saturday night. As for the North Division and the South Division, each respective three-team grouping finished off their 2020-21 regular season schedules.

Starting at the top, the #1 New Hampshire Avalanche needed to claim all six out of a possible six points in the trio of games that they had left on the schedule. If the team was able to do so, then they would earn their first-ever EHLP Regular Season Championship. While it was not easy by any stretch, the Avalanche won all three games by a single goal, with a pair of contests requiring overtime to determine a winner. New Hampshire now enters the playoffs with a record of 29-4-1 and the favorites win it all down in West Chester, PA.

Moving back a spot, the #2 Boston Jr Rangers watched on with bated breath hoping to see the Avalanche drop even just a single point, which would have given them their 4th straight EHLP Regular Season Championship. However, as we just mentioned, the streak ended at three for the Rangers, with the Avalanche taking care of business in the final week of the regular season.

As for the Rangers, they were off this past week, watching on as the Warriors knocked off the Chiefs to set up their rivalry matchup for the Second Round of the EHLP Playoffs.

Similar to the Avalanche, the #3 New Jersey 87s competed in regular season action this past week, splitting their final two games of the year. New Jersey will now take this current week off, as they await the winner of the Philadelphia Little Flyers and New Jersey Renegades series in the Second Round.

Speaking of the Second Round, the #4 Lumberjacks Hockey Club will kick-off the next stage of the playoffs in the EHLP, when they host the New England Wolves tomorrow afternoon at 1:30 pm.

Similar to the Little Flyers and Renegades matchup where the winner will advance to take on the 87's, whoever comes away victorious between the Lumberjacks and the Wolves will earn the right to take on the Avalanche with a trip to the Frozen Finals on the line. 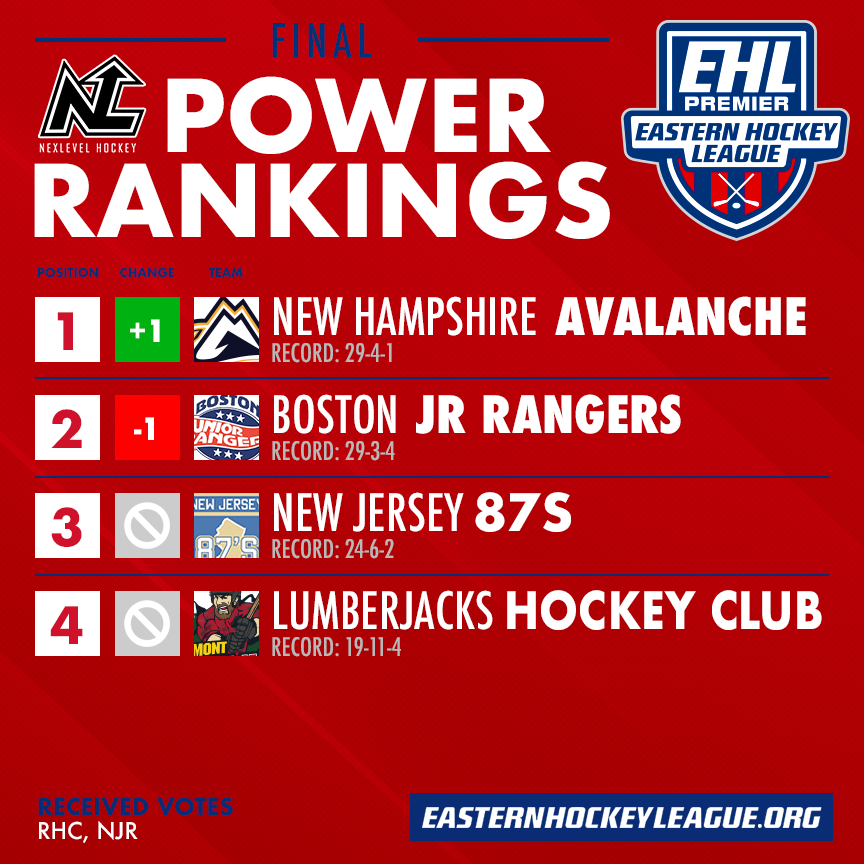