WORCESTER, MA -- Kolye Bankauskas, a forward for the Railers Jr Hockey Club, has committed to UMass Boston for the fall of 2021.

The 2000-born native of Coventry, RI joined the Railers for the 2nd half of the season, and in 22 total games in the Eastern Hockey League (EHL), he's scored 14 goals and dished out 14 assists.

“Kolye has been a tremendous addition to our lineup,” said Railers head coach Sean Bertoni. “His explosive speed and quickness, as well as his ice awareness, make him an elite player in the Eastern Hockey League. He's a special talent that puts the team first.”

Bankauskas is the first EHL player to commit to UMass Boston so far this season, and join a program that has established itself as a very strong partner with the league. With the exception of this season due to restrictions from the COVID pandemic, the UMass Boston Beacons welcome an EHL All-Star Team to campus every October for an exhibition contest. Bankauskas will take part in that game this fall, and he's beyond excited to be heading to UMass Boston.

“It feels great to commit to UMass Boston, as it has definitely been a long time coming,” said Bankauskas. “It has been a long juniors journey and I am glad to be able to close it out. I am extremely happy to commit to UMass-Boston. I have trained with Coach Belisle in the past. I know him very well. He’s a Rhode Island guy. I’m a Rhode Island guy. We come from the same place and I look forward to keep playing for him."

Bankauskas went on to talk about his decision to join the Railers for the 2nd half, and how the move to the EHL ultimately led to this moment.

“Coach Bertoni and Coach Addesa have been very helpful,” added Bankauskas. “They kept me up to date on what colleges they were contacting for me, and gave me their opinions on what I should look for when I visited schools. In the meantime, I could just focus on playing. They really came through for me.”

Bankauskas and the Railers hit the ice today at 11:30 am for game #2 of their Second Round series with the Boston Jr Rangers. 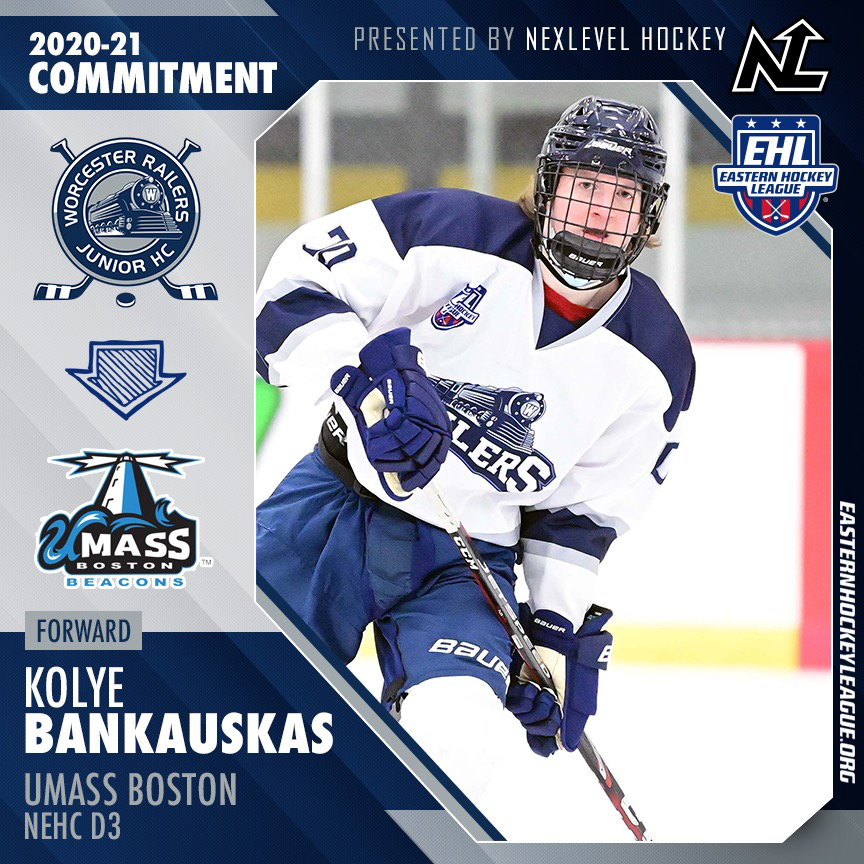