Stage is Set for Division Finals in the EHL and EHLP

On this week's episode of the #EShow we preview the Third Round of the 2021 Playoffs in the EHL and the EHLP. The Second Round was filled with great back-and-forth action at both levels, and a BIG upset in the North Division of the EHL. The #ECrew breaks down each Second Round series, and previews all of the upcoming Third Round matchups. As always, we wrap up this week's episode with the latest update on the Fantasy Challenge. The Fantasy Challenge comes down to its final week, and it will be either Neil or Brittany taking home this year's crown.

Be sure to scroll down for previews of each individual Third Round matchup.

This year’s third round entails the Division Finals, which means that six teams bid for three spots at the Frozen Finals in West Chester, PA. It’s another round of best-of-three series’, which also makes for all the dramatics.

Head coach Brett Tryder and Seacoast recorded a 6-3-0 record vs. the Lumberjacks this season, and at one point collected five consecutive wins against their rivals. Seacoast is led by Clendenin Stewart (3g-1a—4PTS) and Henry Pendleton (1g-3a—4PTS). The 6-foot-7 forward in Stewart not only tallied a hat-trick in his last outing, but scored the overtime series-clinching goal against the New Hampshire Avalanche.

While the ‘Jacks struggled during the regular season against Seacoast, captain Egan Schmitt and his squad proved that they’re a dangerous playoff team. The Lumberjacks surprised the Junior hockey community, after sweeping the New England Wolves in convincing fashion during Round 2. Schmitt, 19, enters the round with four goals and one helper for the five points this postseason. The ‘Jacks have also received strong play between the pipes with David Reduzzi, who displayed a number of big and timely saves in Round 1.

#1 Boston Jr. Rangers vs. #2 Walpole Express
The Junior hockey community was waiting for this moment all season, but more importantly, both teams circled this potential playoff matchup on their calendars back in September.

The Walpole Express and Boston Jr. Rangers weren’t strangers to the league’s weekly power rankings this season and face-off on Tuesday for Game 1. This is arguably the most anticipated series prior to the Frozen Finals.

The Jr. Rangers earned a 3-2-0 record against Walpole this season, and also posted 9-3 and 7-1 victories vs. the Express – earlier in the campaign. Boston’s Jack Moore (0g-4a—4PTS) and Markus Cook (2g-2a—4PTS) lead the way for the red, white and blue this postseason, while goaltender Nathan Mueller is fresh off a shutout. Yet, Jr. Rangers forward Jack Schlifke hasn’t been a stranger to the scoresheet. The 6-foot-5 skater enters the series with two goals for the playoffs, and both tallies were credited as game-winners.

Let’s start between the pipes with the Express. Head Coach Cody Campbell’s masked man in Mason Palmer earned both victories for Walpole this season against the Jr. Rangers, and one would think he’s the guy this round – no matter the circumstances. Keep in mind that Palmer also posted a 32-save shutout against Boston, which marked the lone EHL team that blanked the Jr. Rangers this year. On offense, Zack Simon (3g-4a—7PTS) and Brayden Patricia (3g-2a—5PTS) enter the series as the team’s top point-getters. Additionally, Simon has posted two game-winning goals, while Patricia has also chipped one in.

The Philadelphia Little Flyers visit the New Jersey 87’s on Tuesday for Game 1 at Jersey Shore Arena, and the City of Brotherly Love enters the postseason on a momentum swing. The Little Flyers not only swept the Protec Jr. Ducks in Round 2, but served the 87’s a 3-2 loss on Feb. 24 – just prior to the postseason.

If you don’t know, now you know…

Philadelphia’s Adam Beauvais lit the lamp last round, after netting three goals and posting three assists in two games. The sniper is skating with confidence and could be the ultimate difference maker in the series. The Little Flyers’ blueline will be tested against a high-powered 87’s squad, but keep an eye on defenseman Jake Frankenfield - who should eat up a lot of ice time for the black and orange.

Just north off the Turnpike, the 87’s thrived after their two-week hiatus after the regular season ended. New Jersey swept Team Maryland in convincing fashion during the second round, and witnessed offensive production from the team’s defensemen in the series.

Head coach Adam Houli’s squad outscored Maryland 11-3 last round, and received scoring help from potential 2020-21 MVP candidate Dante Terramani. The second-year EHL skater netted two goals and collected three assists in two games, while all three helpers were recorded on the man-advantage. New Jersey also enters the series with a power-play percentage of 40%. Yes, special teams and goaltending are of the essence for playoff hockey – but discipline and staying out of the box is crucial for both teams in this series.

At the conclusion of the Third Round, the EHL League Office will form a joint set of standings with the remaining 14 teams in the league.

The remaining team with the highest points percentage will be invited to the EHL Frozen Finals via an at-large bid.

#1 New Hampshire Avalanche vs. #2 Lumberjacks Hockey Club
The EHLP’s third round entails the Avalanche facing off with the Lumberjacks, and the North Division rivals are set for Game 1 on Tuesday for a 12:00 p.m. puck drop. While the Avs won a majority of the contests against the Lumberjacks during the regular season, the ‘Jacks split with New Hampshire during the foes’ last four meetings. Yet, the contest marks the Avalanche’s first postseason contest for 2020-21 – perhaps the bye week benefited the squad, but only time will tell.

Unlike the Avs, the Lumberjacks have already hit the ice and swept the Wolves in their second-round series. Goaltender Sam Fath collected both victories in addition to recording 54 saves on 56 shots. Lumberjacks’ forward Brendan Duffy led the way up front on offense, after the Queensbury, NY native netted one goal and chipped in four helpers for five points in Round 1.

The Jr. Rangers won the regular-season series vs. the Jr. Railers, as Boston recorded a 6-2-0 record and outscored their division foes 8-2 in the last two meetings.

The Jr. Railers are led by Matt Lombardi (2g-3a—5PTS), while Boston’s leading goal-scorer this postseason is Duncan Fleming (3g-4a—7PTS).

The Renegades advanced to the third round after coming back to beat the Little Flyers in game #3 of their Second Round series, and are led by James Mattson, who has recorded one goal and two assists. Across the ice, the 87’s are skating in their first game for the 2020-21 postseason. The blue and goal earned a 13-2-0 record against the Renegades this season and aim to join the 87’s’ EHL team in West Chester for the Frozen Finals.

All three EHLP Third Round matchups are a best-of-three series. 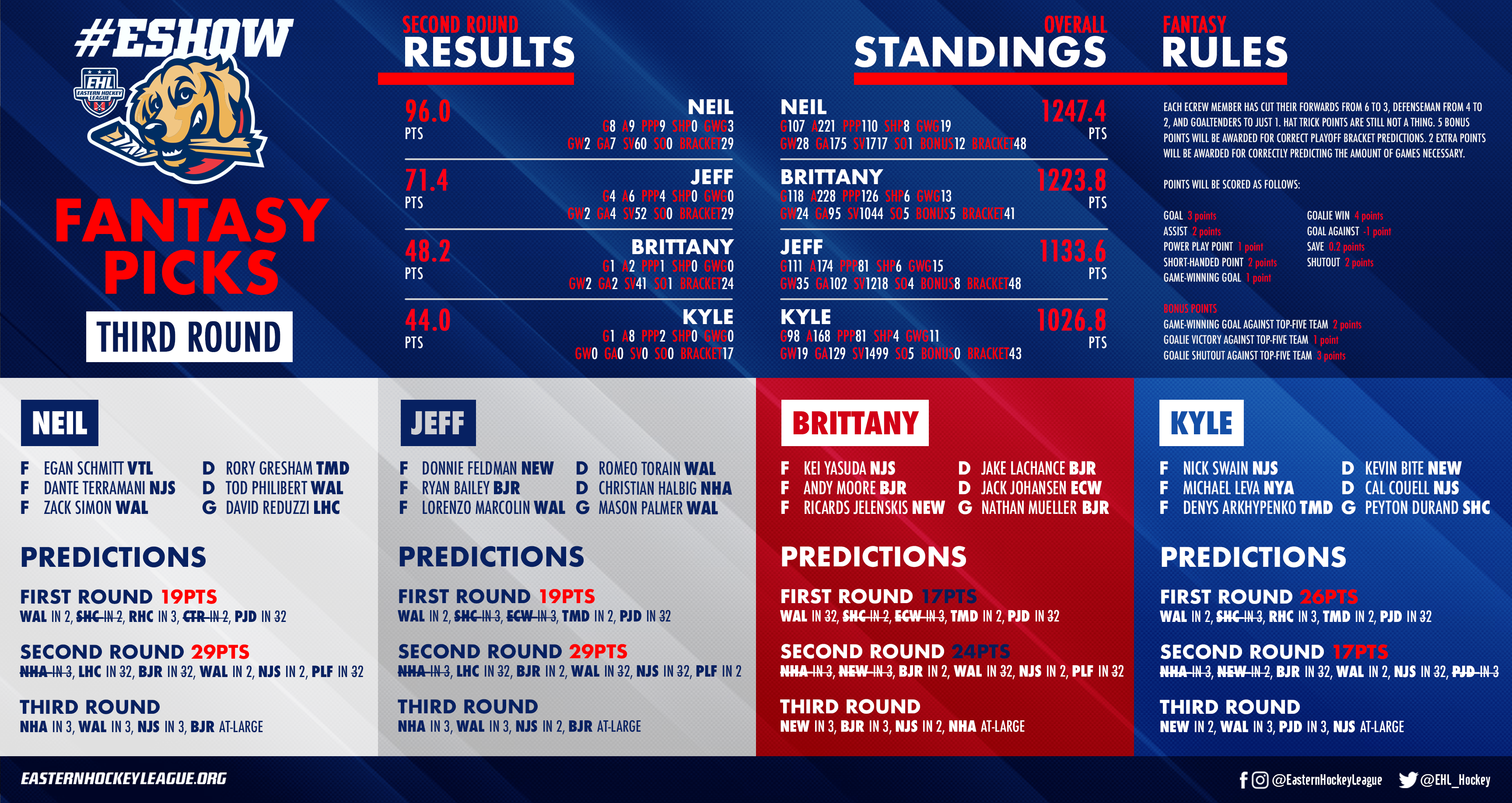