WALL TOWNSHIP, NJ -- Dante Terramani, a forward for the New Jersey 87's, has committed to Lawrence University for the fall of 2021.

The 2000-born native of Monterey Park, CA is playing in his 2nd season with the 87's, and in 83 career games in the Eastern Hockey League (EHL), last year's Rookie of the Year has tallied 113 total points (53 goals, 60 assists). Terramani and fellow 87's forward Tim Debord will be joining Lawrence together this fall.

"It's an unbelievable feeling to have them committed and to the school they wanted and felt was their best fit," said 87's head coach and general manager Adam Houli. "They are some of the most hard-working individuals, both on and off the ice. They exemplify the 87 way and we could not be more proud of them."

As mentioned above, Terramani was named last season's top rookie following a campaign that saw him post 55 points in 44 total games. The play-making and scoring ability only improved this season, as the EHL All-Star has added 58 points in 39 total games so far this year. Overall, the 113 career points accumulated includes 10 game-winning goals, which prove the clutch factor that Terramani clearly possesses.

Terramani is beyond excited to have landed a spot with the Lawrence hockey program, and even more grateful to have done so with one of his current teammates.

"It's going to be great to live with Tim, he was a veteran in my first year of juniors, so I know him really well," said Terramani. "As far as the school, I just believe it's a great location I know the academics are impressive and I look forward to improving the hockey program there."

Terramani went on to talk about the experience he's gained while playing for the 87's.

"I remember my first year I had a really good season and I just tried to stick with it with my training over the summer and get back the next season to do the same thing," added Terramani. "Adam [Houli] and Matty [Kiernan], they just run the program very professionally. They give us every chance to succeed and they help us every chance they get. A lot of it for me was born through my commitment over the summer."

With this commitment now official, there's only one thing left for Terramani, Debord, and the rest of the 87's, as they get set to compete in the EHL Frozen Finals for the first time in franchise history. New Jersey's first game puts them up against a two-time EHL Champion in the New Hampshire Avalanche. If New Jersey can 'Finish The Job', the 87's will become the first team in league history to win the Regular Season and Playoff Championships in the same year. 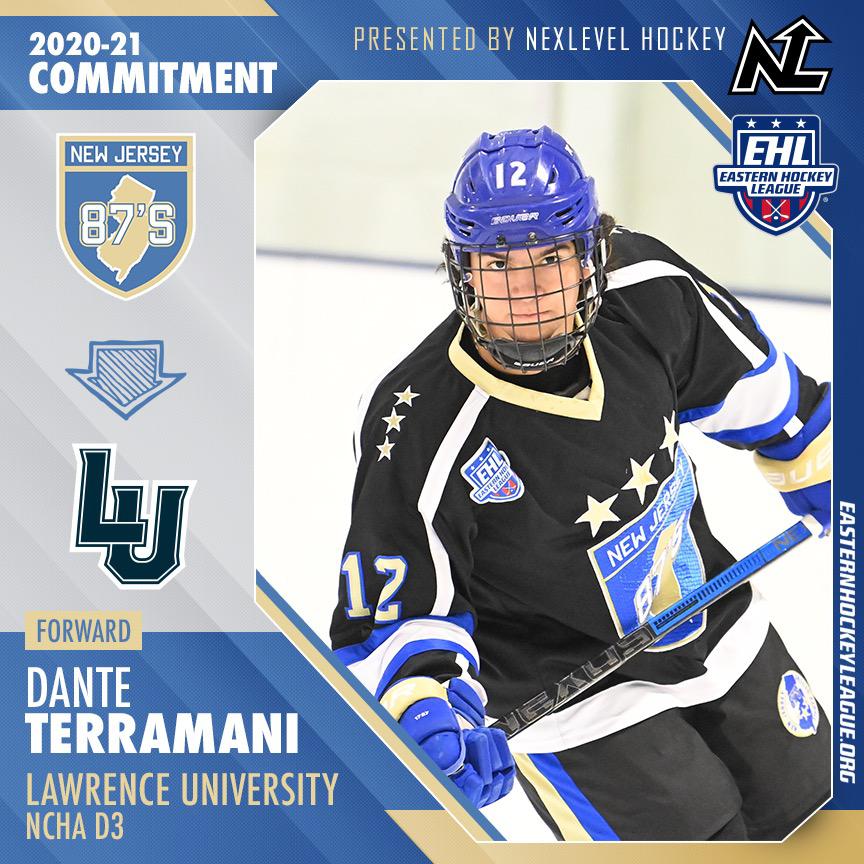