Game Set For 11:00am, Tonights Game Will Not Be Played

Below you'll find a recap of the games.

The New Jersey 87’s opened the scoring after Luke Satkowski dangled a Lumberjacks defenseman and then went backhand top-shelf at the 7:05 mark. While the first period entailed back-and forth-action from both teams, it seemed that New Jersey took control of the game in the second frame, especially on the offensive side of the puck.

Patrick DeMarinis netted the 87’s’ second goal of the day less than 6:00 into the period, while goaltender Cal Moore turned away six shots and helped New Jersey kill off two penalties.

It was Déjà vu in the third period considering how evenly matched the contest was. Yet, it was Damion Williams who tallied another insurance goal during the latter stages of the third period, after finding the back of the net on an odd-man rush. Additionally, New Jersey goaltender Cole Moore earned the first shutout of the 2020-21 Frozen Finals, while turning away 28 shots. 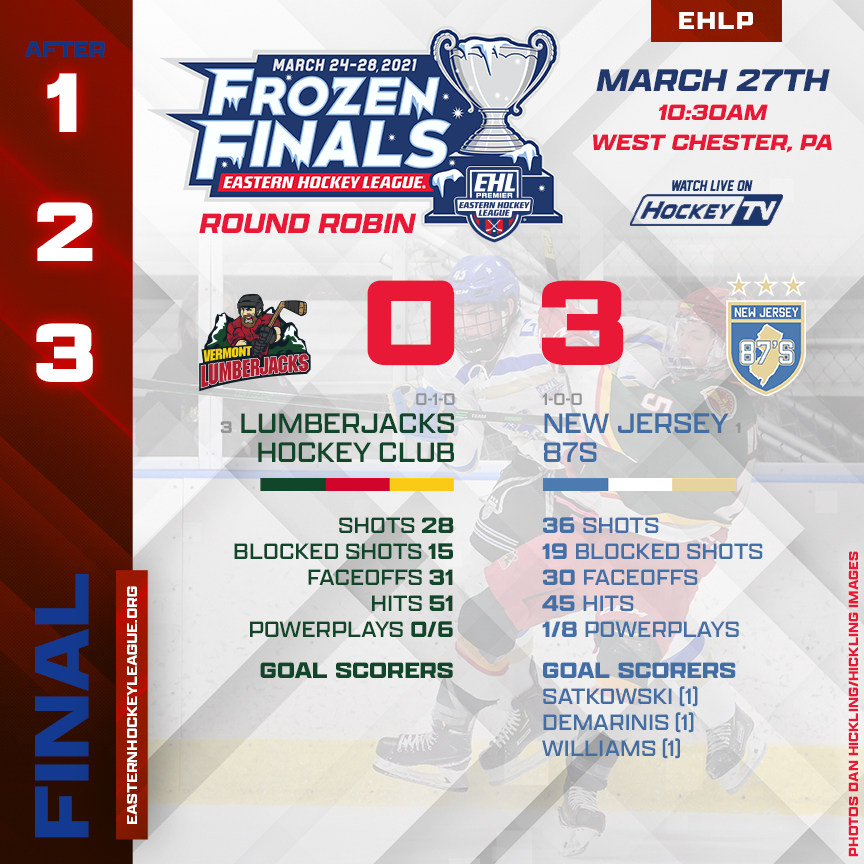 The second contest hosted the Lumberjacks again, but this time head coach Jack Lowery and company faced-off with the Jr. Railers Hockey Club for a 2:30 p.m. puck drop. While the ‘Jacks displayed a commendable fight – the Jr. Railers were too much to handle for their opponents.

Matt Pacheco wasted no time inking his name and the Jr. Railers on the scoresheet, after he cashed in twice less than 7:00 minutes into the contest. It seems that the blue train was on the right track from puck drop. With 7:00 remaining in the first period, Jr. Railers’ forward Matt Lombardi found the back of the net off a one-timer from the right circle.

While the Lumberjacks responded with a late first-period goal, the two sides were scoreless in the second period and setup all the dramatics for the game’s final frame.

Less than 2:00 into the third period, Jr. Railers forward Ethan Blanchard buried a rebound goal past the Lumberjacks’ sprawling goaltender and provided the squad with a 4-1 lead. However, just when things looked like they were getting interesting again – the Jr. Railers defelated the ‘Jacks.

After the Lumberjacks scored midway through the period to make the contest a two-goal game, the Jr. Railers responded with a goal less than 30 seconds later. This time around, it was #73 Zach Stimeling who added the clutch goal for the squad. Yet, the Jr. Railers didn’t stop at that goal. TJ Ezzard netted the Jr. Railers’ sixth and final goal for the day, which advanced the team to the 2020-21 final. 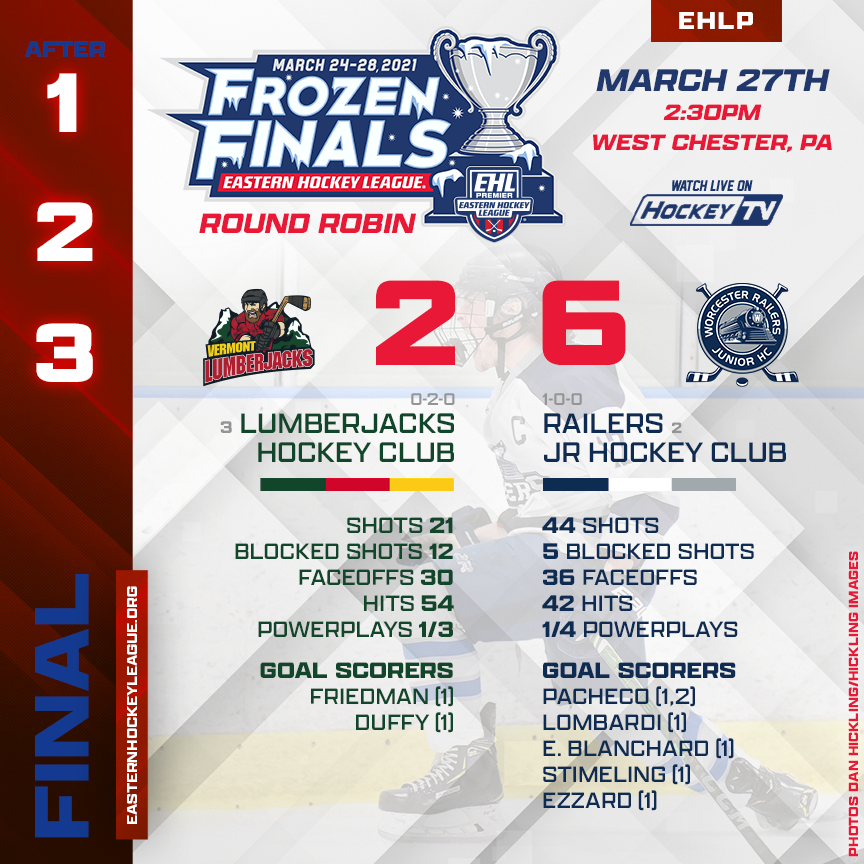 The Jr. Railers and 87’s will face-off on Sunday for the EHLP championship with an 11:00 am puck drop. Follow the EHL on social and tune in to the EHL & EHLP pregame show, which is aired live on YouTube.